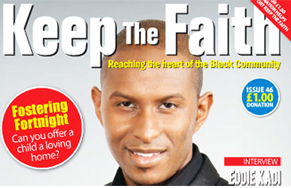 Do you need to effectively target Britain’s BME community? Exposure to the right audience plays a major part in achieving success. One audience worth exposing yourself to is Britain’s black Christian community, the most prosperous, educated and community minded sector of the UK’s BME population.

Keep The Faith magazine reaches the heart of this community – the Church – through its extensive distribution network.

Britain’s black Pentecostal churches are among the largest in the country with several having a regular attendance of 1,000+. Increasingly, black churches also run a wide range of community projects which are designed to help the vulnerable and disadvantaged members of the black community.

For over 50 years Britain’s black churches have provided hope, support, direction, community services, inspirational gospel music and moral guidance to the black community and beyond.

Due to their longevity and the social and spiritual impact they have on their members, black churches are viewed as the most stable, prosperous and influential institution within Britain’s African and Caribbean communities.

Such is the high regard in which black churches have been held of recent years, some of the most powerful and influential members of society have visited them personally, including former Prime Minister Tony Blair and HRH The Prince of Wales. Other prominent visitors include civic leaders, MPs, local councillors, heads of charities, community service providers, business leaders and educationalists.

Organisations are now acknowledging that one way of reaching particular groups within the BME community is through forging working partnerships with the black church.
Editorial Policy

Keep The Faith magazine promotes family values, provides this community with a voice, highlights the need for unity and love, provides inspirational and aspirations news from within the black church community and creates a better understanding in an ever-changing environment.
Editorial Content

Keep The Faith magazine is distributed primarily through black majority & black led churches, community centres, Christian businesses and organisations via our own unique database each month. It is primarily read by people of all ages and backgrounds in the BME community each month (Socio-economic groups A, B, C & C1).

From October 2010 Keep The Faith was also available free in selected Asda, Tesco, Sainsbury and Morrison’s stores in London, Birmingham, Manchester and Leeds

Keep The Faith is acknowledged by the media as ‘Britain’s leading publication for black faith’ and considered one of the most effective vehicles for reaching the BME community nationwide. The majority of our readers cannot be targeted successfully through any other newspaper or magazine.

Keep The Faith is trusted by its readers, they feel part of the magazine as it represents them in a positive way

Keep The Faith readers are aware of their cultural background and eager to retain and promote their identity, though they are also fully integrated within the British society

Keep The Faith works in partnership with various other media such as Premier Christian Radio, OH TV, UCB (United Christian Broadcasters) and many other sources via DAB digital radio, television, satellite, digital cable and the internet

For more information about advertising in Keep The Faith email advertising@keepthefaith.co.uk or call 0845 193 4431 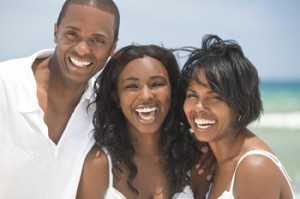