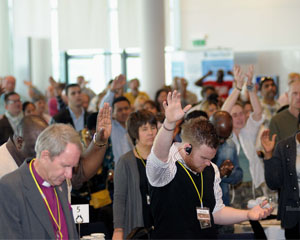 Peter Wooding reports on the first ever, inter-denominational Christian prayer event to be held at Wembley Stadium taking place on September 29, and the involvement of Britain’s Black Pentecostal denominations

All roads lead to Wembley Stadium on September 29th, as Christians from all denominations are uniting towards the National Day of Prayer and Worship (NDOP).

Wembley 2012 is likely to be the single biggest mobilisation of Christians for prayer for a generation, and will engage and involve one of the widest known collaborations of denominations, prayer networks, local Christian groups and media organisations in years.

The anticipation for this historic event has been clearly evident, as more than 30,000 tickets had already been sold by early August. Churches throughout the nation have been booking by the coach loads, with a firm belief that this is a significant gathering that can’t be missed.

“We’re doing everything we can to ensure that members from our denomination will be well represented at NDOP Wembley. It will be an instrument for positive change in this nation, and we want to be a part of it,” said Eric Brown, New Testament Church of God’s (NTCG) Administrative Bishop for England and Wales.

As well as NTCG, churches from all denominations are uniting together towards NDOP Wembley, including the Methodist Church, Elim, New Covenant, URC, RCCG, Church of England and the Baptist Union.

Bishop Brown believes the unity of the Church is key towards a national revival: “It’s important that we all come together, because we are working for one Lord and His heart is that the Church should be one. Therefore, NDOP Wembley is one of the best ways we can come together around a common purpose. My hope is this unity won’t just be for a one-off event.”

The Redeemed Christian Church of God (RCCG) is another of many Black-majority church networks to unite behind NDOP Wembley.

Dr Sola Oludoyi, RCCG National Prayer Coordinator and Representative for Wembley 2012, said: “Scripture talks about how good and pleasant it is for brethren to dwell together in unity, for there God commands a blessing. So wherever or whoever you are, it doesn’t matter your stream, your denomination, as long as you believe in Jesus Christ, you’ve got to be at the National Day of Prayer and Worship.”

The inspiration for NDOP Wembley came about several years ago, when Global Day of Prayer London Convener, Pastor Jonathan Oloyede, a convert from Islam, had several vivid visions of renewal, revival and transformation coming to the UK. These included graphic pictures of Wembley Stadium filled to capacity with worshipping and praying Christians.
What sparked him into action was a vision of people all over the UK praying the Lord’s Prayer at the same time: in pubs, churches, schools, offices, homes and on the streets. As the Christians prayed in one accord, light and healing spread across the British Isles.
Global Day of Prayer (GDOP) London has been a focus of prayer and Christian action since 2006, with prayer networks now in every London borough. West Ham Stadium 2007, Millwall Football Stadium in 2008, and West Ham Stadium in 2010 saw a combined attendance of 40,000 Christians attending.

“The worship leaders we’ve called together have a sense of a nation bowing before a true and living God, and I’m so excited to see what will happen in this iconic place of Wembley Stadium,” said Noel Robinson, founder of the Kingdom Worship Movement.

NDOP Wembley 2012 will also be the fulfilment of Pastor Jonathan’s vision to see the next generation bring about revival. 10,000 young people are expected to be commissioned on the day to carry on the baton of prayer for the nation.

“The vision I saw of many young people, marching as an army, is about to be fulfilled at Wembley. This nation is about to witness an explosion of dynamic youth on fire for God and the Kingdom,” said Jonathan.

Soul Survivor’s Mike Pilavachi said: “We believe very strongly in the power of young Christians uniting in prayer. We stand united with other youth movements to encourage this generation to gather at Wembley to pray and worship together, and then go back to their homes to do the stuff!”
NDOP Wembley organisers say the event will be an historic opportunity for the church of the British Isles from every denomination, stream and tradition to unite at Wembley Stadium to pray for our nation. The programme, which will run from 2.00pm to 6.30pm on Saturday September 29th, will be full of praise, intercessory prayer for our nation, teaching and spiritual impartation.
To book your tickets, call 0800 756 5451 weekdays 8.30am – 5.00pm, or visit www.ndopwembley.com
Connect on Facebook: www.facebook.com/ndopwembley, or follow on Twitter: @ndopwembley