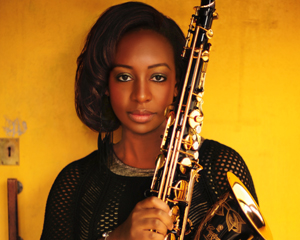 YolanDa Brown is currently one of Britain’s most famous female saxophonists. She talked to Rachel John about her debut album, education, and the role that faith plays in her life.

YolanDa Brown is most probably one of the UK’s most well-known female jazz artists.
The double MOBO Award winner has performed all over the world; worked with a number of leading artists, including The Temptations, Mica Paris and Jools Holland, and is viewed by many as a saxophone sensation.

Since making the decision to teach herself the saxophone at 13, YolanDa has experienced undoubted success.

Whilst still a teenager, she was spotted by the Jamaican High Commissioner, performing for the Elders Association in London, and was subsequently invited to perform for the Jamaican Prime Minister. She recalled, “I was flown first class to Jamaica to do just that, and it was an amazing experience. I was only 18 at the time, but it gave me the vibe of what it is to be an artist.”

Fast forward 11 years later, and the 29 year old released her long-awaited debut album, April Showers, May Flowers, on her own label in February this year. It proved to be an instant hit, rising to the top of the iTunes jazz charts, and garnered much media coverage.

April Showers, May Flowers sees YolanDa exploring various musical genres, including reggae, soul, classical and gospel. She shared, “It’s a combination of all the music I enjoy. It’s risky and unusual for a debut album, but I wanted the album to be an introduction of who I am and of what’s to come.”

YolanDa also shared that she found the creative process challenging at times. “Writing the songs was the hardest part, because all the material is original. The ‘April showers’ represents the hard times I experienced making the album. During that time, my motivation was to keep my faith. I knew there would be a light at the end of the tunnel, which was the beautiful outcome of having a completed album – the ‘May flowers’.” 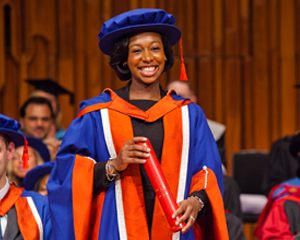 One of Yolanda’s favourite tracks on the album is ‘Dear John’, and revealed the inspiration behind it. “John was my PhD supervisor when I was at the University of Kent. He was really understanding and supportive while I was combining my studies with music. John was there for me all the way. When I decided to put the PhD on hold, and focus on making the album, John was understanding in my decision and supported it.”

YolanDa dropped out of her PhD in Management Science studies to pursue her music career in 2010. She recalled, “It was a difficult decision, as I had put four years of research into it. The tours and music began to take over my education, and I couldn’t manage both at the same time.”

Three months after putting her PhD on hold, she received an Honorary Doctorate of Arts from the University of East London. “I saw it as a sign from God that I had made the right decision.”

She hasn’t given up her studies altogether, however. She said, “I definitely will go back to my studies. I don’t want my research going to waste.” Having been named one of the UK’s top 30 Black students – according to the Evening Standard – YolanDa joked that she hopes her topic is still unique when she goes back to her studies.

When asked about the pressures young people may face when it comes to choosing between ‘professional’ and ‘creative’ careers, YolanDa replied, “Things have changed a lot, considering you can now get a degree in Music and other creative subjects, but they are still seen more as a hobby rather than a profession. With more students opting for creative subjects and careers, the prospect of making it in the creative industries is getting easier.” When asked how this issue could be faced, Brown replied with an answer that seems so simple, yet overlooked. “They need to communicate the potential of a creative career to parents. If careers advice in schools and colleges were more stable, this could be achieved.”

YolanDa’s faith in God plays a major part of her life. She grew up in a Christian home, and made the decision to follow Christ at the age of 15 after watching a play about the parables of Jesus. She currently attends Liberty Church in Tottenham, North London, and has found it to be a congregation that is very supportive of her unique and demanding career.

She also likes to help others when she can, and is currently involved in the Yahama Class Band, a project that seeks to teach children in deprived areas how to play a musical instrument. She has witnessed how being able to play an instrument improves a child’s confidence.

Life’s experiences, challenges and successes have all served to strengthen YolanDa’s faith. “This may sound strange, but everything that has happened has made my faith stronger. Every day is different. As an independent artist, there is lots to do, so I have different ‘hats’ to suit whatever I’m doing at the time.”

Having achieved a combination of academic and music success, YolanDa’s proudest achievements so far have been creating an independent record label and completing the album. “My faith is my motivation, and I try to keep God at the centre of all I do.”

What’s so good about submission? by Dionne Gravesande