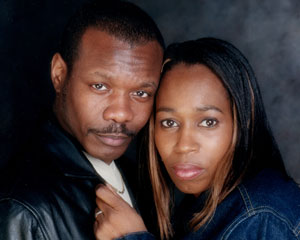 “God kept me standing; not that I was without mistakes and huge clangers, but my belief that God was sovereign never waned.”

The Day My Life Changed

Keep The Faith talks to Philip Noel about how he has coped since his wife’s death last year, and how faith in God is restoring him and his family to emotional wholeness

The 25th March 2012 started off as a normal day for church pastor, Philip Noel.  Whilst working away from home, he called his wife Barbara at 10.30am to inform her that the next time he visited the hotel he was staying in, she’d be with him.

Little did he realise that was the last conversation he would have with his wife.  He recalled, “I got home at 2.30pm; looked in the front room; checked the oven and then the fridge – like men do. Barbara had bought all the delicacies that I liked.  I then went upstairs to say a Hello… I walked into our bedroom to find her lying on the bed; eyes wide open; her mouth full of vomit; a trickle of blood at the side of her mouth, where she had bitten her tongue as her head had fallen back onto the bed, and her nose was full of mucus. Her right arm was outstretched still holding the cup that contained her last drink of coffee. I was subsequently told by the doctors that she had had a brain aneurysm, and had died instantly, feeling no pain.”

Barbara’s totally unexpected death left Philip and his five children – Kiera 26, Samara 22, Chanel 22, Jordan 17 and Josiah 12 – in a state of grief.  “My children wept until they had no strength to weep anymore. One daughter collapsed to the floor, unable to stand. I was being held onto by all of them at the same time. They were inconsolable. By then, other family members had arrived, but at the time, as the only parent left, only my shoulders would do.  I had to be strong for them. As soon as we got home from the hospital, I somehow held them all at the same time, gathered strength from Heaven then, while they were still bawling, crying screaming, I told them that we had to declare “Praise the Lord”. The Scripture kept ringing in my ears: When the spirit of heaviness comes, put on the garment of praise. They did not want to, so I told them that we had to strike back at the work of the adversary.  My time to cry came later.”

Philip and Barbara met when he worked as a taxi driver; she was a passenger.   He asked her out, and the rest – as they say – is history.  They were together 25 years and three months.  Their marriage was a good one, and Philip says his wife was his number one supporter and great encourager to their children.  She was also a very talented lady, who was an artist and actress, and who, during her career, worked as an Executive PA at the BBC and the National Institute of Clinical Excellence.

The days and months following his wife’s death were painful, but were made easier by the support the Noels received  from extended family, friends, and the church where Philip serves on the pastoral team, Jesus House in Brent Cross, North London.  He shared, “Busloads of people kept visiting our home, food was cooked and brought. I was surrounded by my ministers, who assisted me in every way – ably led by Pastor Agu Irukwu. We were not alone.  My brother James stalked me, in case I did something dangerous or suicidal. This would never be, as I am a believer of the teachings of Jesus Christ, even though I did not want to be on Earth anymore, going on at times felt inconceivable.”

I asked Philip what he misses most about not having his wife around.  He replied, “Empty bed; loss of direction; hunger for her cooking; missing her voice, and even her telling me off. Not being an able replacement for the children who needed their mother – not easy with four daughters and a young son.”

In the early months following Barbara’s death, Philip made a number of changes.  He moved house, and changed the schools of his two youngest children.  He spent a lot of time in prayer and Bible study with his kids, to get them to understand the concept of Heaven, and the fact that they would meet their mother again.  He also recorded a song, ‘Mighty God of Miracles’, in memory of his wife, and accepted every preaching engagement he received, in order to keep busy.

When asked what sustained him during those difficult times, Philip states it was his faith, and encountering people who had experienced bereavement.  He was able to share words of comfort.  He added, “God kept me standing; not that I was without mistakes and huge clangers, but my belief that God was sovereign never waned. And that Barbara’s death would not be in vain. God had to have a plan for our good.”

Philip has been a widower for almost a year now and, although he still misses the wife he adored, he feels ready to embrace the future.  “I have been restored by God; have found love, and no doubt through the faith we have already discussed hopefully that in 2013 I will be married again.”

My Tribute by Marcia Clarke PhD