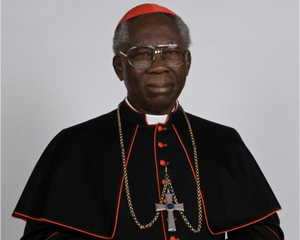 Following the surprise and historic resignation of Pope Benedict XVI, there is speculation that the man chosen to replace him as the 266th Pope might be Black, or from the developing world – Asia, Latin America and Africa – where Catholic followers now outnumber those in Europe.

West African Cardinals, Francis Arinze of Nigeria and Peter Turkson of Ghana, are frontline contenders to become the next Pope and provide spiritual leadership to the world’s 1.6 billion Catholics.

Francis Arinze is the favourite to take the Papal Crown.  The 80-year-old was appointed Cardinal-Bishop of Velletri-Segni – the post Cardinal Ratzinger held before he was appointed Pope Benedict XVI in 2005.

Cardinal Arinze was a key advisor to Pope John Paul II, and there was much speculation in 2005 that he would become leader of the Catholic Church, following Pope John Paul II’s death in 2005.

Ghanaian Cardinal Peter Turkson is second favourite to become Pope.  He currently heads a major Vatican department – the Pontifical Council for Justice and Peace.  He has been repeatedly promoted by Pope Benedict, and takes a conservative line on gay marriage and ‘alternative lifestyles’.

He has been quoted as saying, “We need to find ways of dealing with the challenges coming up from society and culture.”   He has also admonished the Church to evangelise and convert those who had embraced an alternative lifestyle, stating, “We cannot fail in our task of providing guidance.”

A conclave of cardinals will meet later in March to decide on Pope Benedict XVI’s successor.  They aim to have a new Pope in office before the Easter celebrations begin.

Pope Benedict announced his resignation on February 11, stating that he was stepping down due to ill health.