Social media is the fastest way to get live information about current events around the world. With one billion users on Facebook alone, most of the world is connected through the Internet, eliminating distance and the time taken for information to travel from one person to another.

Social networking has given users the freedom and ability to express their concerns to a global audience, and gain a following at the same time. I was having a recent conversation with a friend, and we both agreed that the best way to receive unbiased news and breaking news was now via the Internet, and no longer the traditional news programmes on TV or radio.

People can create a news broadcast on YouTube from just their bedroom, and share it on their Twitter feed which, in turn, can be shared on Facebook and Google+, covering all major social network platforms.

In the recent years, social media has become an important factor in politics and news. Twitter has increasingly become the most important source for live information, as reporters and news channels tweet about the latest events as they happen. During the Tottenham riots in the summer of 2011, Twitter was used to give updates during the beginning of the event, and to rally the community to clean up the streets. The hashtag #londonriots generated over one million tweets, while #riotcleanup was tweeted 198,000 times.

Social media is even more important when it comes to the issues of the Church. According to BBC News, Pope Benedict XVI has started tweeting in Latin from his @pontifex account, while St Paul’s Cathedral’s Facebook page had 7089 likes and 2178 people talking about it. The recent stance on same-sex marriage in the Church from Steve Chalke created chatter on Google, Twitter and Facebook. Reading through the comments gives an overall insight into the mixed opinions from Christians and non-Christians alike.

But with this deluge of information on the Internet, there is a downside. As Christians, should we really be spending so much time on Facebook and Twitter? I just asked a member of my staff how much time he spent on Facebook, and the answer came back: “I am logged in all day.”

I personally have had to take some ‘Facebook fasts’, even though I mostly use it with a business purpose in mind.

So, how can we find and listen to news and information relevant to us?

Here are a few tips to help:

1. Filter your news feed using keywords. The possibility of doing this varies from platform to platform, but it is worthwhile browsing your social media accounts and adjusting your settings.

2. Select the type of information you want to receive. There are several people on Facebook that I am happy being their ‘friend’ but, frankly, I do not want to ‘read’ their news. This could be because it’s too frequent, or completely irrelevant. I simply unsubscribe from that feed. Job done.

3. Use an application like HootSuite to register all your social media accounts and compile multiple status updates into one space.

So, Blackberry (formerly Research in Motion) has just launched the BB z10. As a ‘former’ huge fan of the Blackberry series, I was slowly let down by numerous software crashes and awkward usability of the various BB phones. Now Blackberry promises, “This phone is ‘built to keep you moving.’” Other competitors, such as Samsung and the iPhone 5, make similar claims on how smartphones can change our lives.

There has been the usual excitement and hype around the BB z10, as evidenced on social networks, especially Twitter. It seems everyone is going gadget crazy, trying to get the latest smartphone. In the midst of this, I ask, “Is it really necessary?”

App of the Month 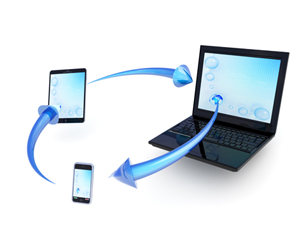 Wunderlist is an easy-to-use task management app, available on your desktop computer, mobile or smartphone. There are loads of apps that help with a to-do list, but if you are managing several categories of tasks, and are looking for a simple intuitive app, Wunderlist is one to try out.

It is compatible across several platforms, which means that no matter what you use, you still get your list.

Wunderlist is available for Android tablet and phone, Windows, iPhone, iPad and Mac

KENO OGBO runs Spiral Web Solutions and is passionate about helping businesses achieve their goals using websites and other online marketing tools. Contact her on 07958 004 739 or email keno@spiralwebsolutions.com