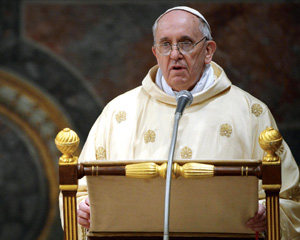 Pope Francis, the new leader of the Catholic Church, has eschewed the luxuries of high office and has opted for simple Christian living. Jacqueline Laing explores the lessons believers can learn from his approach to life

“Jesus teaches us another way: Go out. Go out and share your testimony. Go out and interact with your brothers. Go out and share. Go out and ask. Become the Word in body, as well as spirit” are the words of the man who, on 13th March 2013, became the leader of the Catholic Church – one of the world’s largest religious organisations – and its 1.2 billion followers.

Jorge Bergoglio, the unassuming cardinal from Argentina, was elected the 266th pope after five rounds of voting. Pope Francis took to the balcony of the Vatican to greet onlookers, confer a blessing and, most importantly, solicit the prayers of those whom he was about to serve. Just in that deferment alone, we began to get a snapshot of one of the world’s most high profile religious leaders; a man aware of his own humanity, and in need of prayer.

As important was his decision to name himself ‘Francis’ after St Francis of Assisi – the founder of the Order of the Friars Minor (Franciscans), known for their regard of nature, emphasis on humility, and service to the poor and destitute.

This symbolic move, alongside his Jesuit desire ‘to help souls’ engage, coupled with social action, humility, advocacy and the shunning of the trappings of Catholicism, has made Cardinal Jorge’s arrival at the papal office even more unique.

Although his Jesuit roots are important, his embrace of Franciscan theology is far more interesting. At the heart of their theology is the notion of kenosis – the total self-giving/self-emptying of God in Christ, manifested in the human condition. As such, this divine willingness to become human reveals a love for that which is ‘other’ (ie. not divine and/or different, as in you and me) which the Franciscan Order understands as poverty. It is this understanding of poverty – aligning oneself with one’s neighbour, whatever his or her condition may be – and other Franciscan beliefs, like engaging with those of faith and none, and the call to ‘repair and rebuild a church in ruins’ that ought to make us question why such an unassuming ‘outsider’ should hold one of the most powerful positions in the world.

Indeed to many, rehearsing a theology alien to the world of evangelicalism might be unnecessary. However, the mark of a mature faith is the ability to consider the world around us, and to ask whether something like the induction of Pope Francis is simply a fluke, meaningful only to a group of people who we may view as a tad cuckoo, or might it be possible that God in His omniscience took what is ‘foolish’ to introduce a new way of being – a new order – not only to one of the most influential religious systems in the world, but as an example to Pentecostals and Evangelicals alike, that there is another way of living and leading in the world as Christians?

I believe it to be the latter. However, my fear is that it is all too easy for us to pour scorn on the comings and goings of other religious orders, and dismiss what might be a genuine move of God, simply because we don’t like or understand the messenger. How many times in Scripture did God use uncommon, unholy things and people to move, liberate, accomplish a task and/or deliver a message? So why should it be different today?

Clearly, society is in need of liberation, with a message not of words but of action. Here in the UK, 1 in 5 of the UK population falls below the poverty line1; 33% suffer multiple deprivation2, and over 30 million people are experiencing financial insecurity3. In light of this, it is incumbent upon us to ask whether our response to the poor, disabled and marginalised has truly been the liberating force God intended it to be, and whether our desire to aspire and accumulate in the name of ‘prosperity’ has led us to a place of greater compassion, understanding and Christlikeness. Further, have we, in our bid to ‘be like’ our neighbour, rather than ‘counter’ our neighbour through love and simplicity of life, alienated ourselves as a ‘church’ that is far from reality?

These are questions only you and I can answer – just like Cardinal Jorge Bergoglio, on his journey to the Vatican, had to answer also. This doesn’t mean that tomorrow we take a vow of poverty, and forgo valid aspirations, but again it does mean that our Christian journey ought not to be consumed with the tangible ‘more’, but rather with a way of being and thinking about the ‘more’ within the veil of simplicity, humility and purpose.

In Pope Francis, I believe that God, in His wisdom, has again presented to us a model of what it means to be a follower of Jesus. Indeed, the dogma of the Catholic Church, such as women, sex and contraception, sullies his message a little bit; however, we choose what we see. In this instance, Pope Francis’ work and lifestyle amongst the poorest speak volumes, and testify that God never leaves Himself without a human witness; a conduit, demonstrating how the ‘Word became flesh’ offering hope to the poor, marginalised and oppressed.

Jacqueline Laing has a BA in Theology, and is a writer and speaker. She is also the founder of a company called Lovefro, and is on the ‘rocky road’ to ministry.