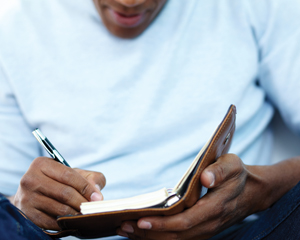 Bishop Dr Joe Aldred talks about the power of the written word, and shares why Black Christians in the UK should write down, as well as verbally articulate, their experiences.

Differentiating between the transient and the enduring is a real challenge in a fast food culture, where instant gratification rules OK. As the saying goes, if it feels good do it. Put differently, irrespective of how valuable ‘it’ is, if it doesn’t feel good, don’t do it. The challenge we often face is ascribing appropriate values to things of relative value.

In the biblical account of the wilderness temptations of Jesus, we find the immortal words: ‘Man does not live on bread alone, but on every word that comes from the mouth of God’ (Matthew 4:4). Literal bread, with a short shelf-life, is being contrasted with something more substantial and enduring – the Word of God. Even in a context where literal bread was needed, spiritual bread took precedence. The cost of literal bread – complying with a malevolent power – would, in the long term, prove destructive. Food is essential to life, but not food alone.

We humans tend to be at our differentiating best when asked to choose between extremes like right and wrong, but find it more difficult to choose between better and best. Yet we know that not everything is a matter of black and white, right and wrong. Often, grey is the predominant colour, with choices to make. Such is the case when we think of oral and literary traditions and cultures.

Humankind was oral long before we were literate. People learned to memorise in order to perpetuate, and developed rhythmic life patterns to aid memory. Much of what we have as biblical narratives in Old and New Testaments bear this out, and were first transmitted and perpetuated orally. In the Jewish tradition, ancient rabbis were required to memorise huge sections of the Old Testament, and Muslims and imams are noted for memorising large portions of the Qur’an. And I recall as a Sunday School pupil memorising Golden Texts every week.

I am fascinated by the origins of writing. The earliest writing is thought to have been invented in ancient Sumer and Egypt around 3200 BC. After that, written languages spread to Mesoamerica and China, and right up to the modern times in all its complexities. The Babelisation of language means that today, according to the Linguistic Society of America, there are about 6,800 distinct languages in the world, and they come to us almost always first spoken before developing in written form.

When the Old Testament prophet, Habakkuk, was instructed to write down the revelation he had received from God and make it plain on tablets, so that a herald may run with it (Habakkuk 2:2), it was recognition, if any were needed, that while orality has its place, if you truly want to proliferate a cause, then write it down. And, in an age of mass printing, the written word can take on a life all of its own, covering the world as the waters cover the sea.

Which brings me to my final point, of why I am so zealous about writing. I have a suspicion that the Black community, including the churches that serve it, in Britain since the Windrush has been so preoccupied with survival (bread), that we have neglected the pen. Thankfully, the picture is changing, for the danger is that, in a literate world, if a community does not self-articulate, others will study and write about it in their own words and for their own purposes. It has been said that until the lions tell their tales, the story of the hunt will always glorify the hunter.

Of course, some proudly declare that White people come from literary cultures, while Black people come from oral cultures. Really? What kinds of people do we think hail from Sumer and Egypt? But we don’t have to choose between literary and oral – both are necessary and exist cheek by jowl. However, if you want to leave your thoughts, your history, your philosophy to posterity, write it down, so that present and future generations can run with it, ie. learn from it and propagate it.

After years of not writing enough, Black Christians in Britain have taken to the pen since the 1990s, and not before time. My new book, ‘Thinking outside the box – on race, faith and life’ (my sixth book), is the latest in an increasing corpus emerging from the context of Black British Christianity. And I am driven by the knowledge that, since language emerged, God has seen fit to use it to communicate with humanity. God shows divine commitment to communicate in the Incarnation, where the eternal Logos put on flesh and lived among us. But alongside this divine self-revelation has come a canon of Scripture written over thousands of years by various human instruments, so that today we can speak not just of the living Word, but also the written Word of God.

For a people made in God’s image, we too should continue the tradition of writing down our revelation, so that everyone may learn about what God has enabled us to become. Oh the power of the written word!