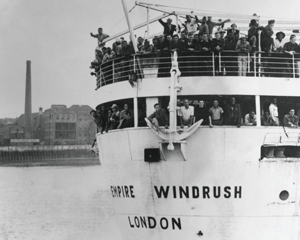 This June marks the 65th anniversary of the arrival of the SS Empire Windrush in Britain, which heralded the start of Caribbean migration to the UK. Dr Anthony Reddie explores the social and spiritual legacy of the Windrush Generation.

One of the most seismic social, political and cultural events to have occurred in contemporary British history commenced on 22nd June 1948. This date marked the arrival of 492 Caribbean people at Tilbury Dock on the SS Empire Windrush.

These British subjects were travelling from the disparate islands of the Caribbean, and began what was to be seen as a mass migratory movement that reached its peak in 1961, when approximately 74,590 entered this country from the Caribbean. 1961 is significant, for it was one year prior to the 1962 Commonwealth Immigrants Act, which greatly limited Black immigration from the Caribbean to Britain. Across an approximately 20-year period, somewhere in the region of 500,000 people made their way to the UK from the Caribbean. Among that number were Lucille Walker and Noel Reddie, who came from Jamaica and were married in August 1962. They are my parents.

One of the enduring legacies of the ‘Windrush Generation’ was the Christian faith they brought with them. Part of that legacy has been the development of Black-led and Black Majority Churches. These predominantly ‘Black churches’ can be understood in two forms. The first category is comprised of Black-led Pentecostal churches. These churches were, for the most part, offshoots of predominantly White Pentecostal denominations in the southern states of the US. These churches were first planted in the UK in the early 1950s.

The largest and most established of these churches are the New Testament Church of God, the Church of God of Prophecy and New Testament Assembly. The second strand is Black Majority churches in White historic denominations. These churches are demographically determined, as their Black majority membership has grown out of Black migrants moving into inner city, urban contexts, coupled with the White flight of the middle-class.

It can be argued that the Black Church is the institution that has affirmed and conferred dignity upon Black people in a wider context, where racialised oppression has been all too prevalent. To put it quite simply, Black folk in the African Diaspora may not have survived up to this point, had it not been for their God-inspired genius for creating churches in which they could seek refuge from the ravages of racism and White supremacy.

In the Christian liturgical year, we are presently in the season of Pentecost. In Acts 2:1-47, we see a depressed, frightened and dispirited group of individuals, transformed by the Spirit of God into a forceful, dynamic and vibrant community. Throughout the long, turbulent struggles of Black people, particularly on our Diasporan journeys, we have been sustained, strengthened and transformed by the dynamic power of God, manifested in the form of the Holy Spirit.

The legacy of the Windrush has been a visionary faith of the spirit in which these faithful people have had visions and dreamt dreams of a better life in the UK. The rise and success of Black Christianity in Britain has reminded us of the dreams and visions of Pentecost that show us that God is bigger and beyond the inherent racism, prejudice and discrimination that have bedevilled Black people living on this island across the past 60 years.

Windrush has changed the UK. It has shown what generous, non-racist Christianity ‘from below’ looks like.
When many Black people travelled to the UK in the post-war Second World War migration of the 1950s and 1960s, where was the outpouring of love for one another, upon their arrival in post-war Britain, as depicted in John 13:34-35?

Main image: 22nd June 1948: The ex-troopship ‘Empire Windrush’ arriving at Tilbury Docks from Jamaica, with 482 Jamaicans on board, emigrating to Britain. Photo by Keystone/Getty Images

Third image: At 7 a.m. today a ship the Empire Windrush berthed at Tilbury with 417 “Sons of the Empire” on board. TopFoto

From Exclusion To Inspiration: The PCU story

A measure of faith by M. Jasmyn Allen, MSc