Christine Ohuruogu, one of Britain’s most successful athletes, won over a whole new legion of fans – and a lucrative deal with Virgin Media – following her recent win at the 2013 World Athletic Championships, where she won the Gold in the 400m. Known for her commitment and dedication to her sport, Christine Ohuruogu is also a committed Christian, and spoke to Keep The Faith about her life, work and faith.

2013 seems set to be the year the British public takes Christine Ohuruogu, – one of Britain’s most successful athletes – to their hearts, following her win at the World Championships in Moscow.

You’d think the way she’s currently being fawned over that she’s only just started her athletics career. In fact, Christine has been competing at a top level for 10 years. 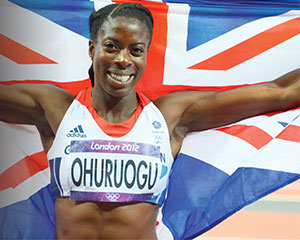 She is one of the UK’s leading athletes, and her World Championship win is just another crowning moment in an illustrious career that has seen this 400m specialist become the only athlete in the world to win the 400m World Championships twice – the first time was in 2007. In 2008, she was crowned 400m Olympic Champion in Beijing, and surprised everyone when she won a silver medal in the 400m at the 2012 London Olympics, beaten by a fraction of a second by the winner, American Sanya Richards-Ross. No one was even expecting her to reach the final.

Renowned for being a focused premier athlete, Christine is also unashamedly a Christian, and unafraid to talk about her faith, and glorify God through her life and sport. 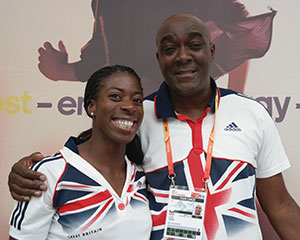 She is happy, ecstatic even, about her World Championship win, particularly as she is the first woman to win the world title twice, and achieved the goal she set for herself this year: breaking the British 400m record. She recalled, “I didn’t realise all the trappings of my win until afterwards. I didn’t realise I was the first woman to have won it twice. It didn’t hit me that I had won the title twice either. Me and my coach started off the season focusing on the British record, that’s really what I wanted for the season, anything that came on top of that was a real bonus for me.”

Winning the 400m at the World Athletics Championships was a dream come true for Christine, who admits a welter of emotions went through her mind as she crossed the finishing line. “I was kind of very shocked. It was exactly how I’d imagined it. I’d imagined that I’d win it, and get the British record at the same time. And to get a personal best. It was like when I won in ’08, it’s almost like I’d been there before. So, when I won it, I couldn’t believe that everything I had been working towards had actually happened.”

Various new and exciting opportunities have opened up for Christine following her World Championship win, the most lucrative one being a sponsorship deal with Virgin Media. She’ll now join fellow athletes, Usain Bolt and Mo Farah, in promoting their broadband products. Christine is taking this new development in her stride. “Yes, it’s nice. These things are just bonuses, and you always give thanks for these things that come along, but my job is just to run, and everything else is a bonus, but it’s really great to be alongside people like Mo Farah and Usain Bolt. I think I’m in really good company.”

You do get the impression that Christine is a woman who eats, sleeps and breathes athletics. She trains twice a day and, for this season, utilised the services of a visualisation coach in her desire to achieve her goal of winning and breaking the British 400m record. Her strategy obviously worked.

Christine’s faith undergirds everything she does, including her work as an athlete, and plays a major role in her life. “It (Christianity) has helped me a lot,” she explained. “There was one time, where I mentioned that God had helped me in my race, and I think people kind of took offence to that, because it’s like you don’t work hard for it. It’s (Christianity) just given me that not fearing my job.” 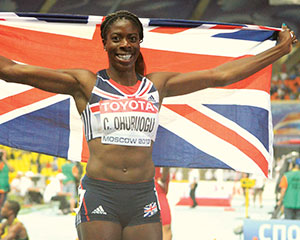 “When I go to the start line, I never pray that I’m going to win. Obviously I want to win, I’ve trained to win and I work to win; 24/7 I’m thinking about winning, and I’m thinking about my final. You eat, you sleep, you drink; everything is focused towards making sure you get your best. It’s obvious I want to win, but I never pray to win. I just pray, ‘Help me do my best, don’t let me fear other people, don’t let me fear the job at hand. Help me do all the right things at the right time. And if I win, that’s great. If I don’t, help me be a gracious loser. Even if it doesn’t go too well, you still give thanks regardless.

“It’s about helping me stay focused, and believing in the fact that He can help us, we can ask Him to help us run well. He wants to help us go out and do the best we can. He gives us this gift to perform well. It’s great when it goes well.”

And where Christine’s faith is concerned, it helps her to be the person God created her to be. “For me, faith is a 24/7 thing. It’s not something you switch on and off once a week on Sunday. I try to use it to help me make myself a better person, and more able to accept myself. You have to learn to accept yourself and accept who you are in Christ, rather than what other people want you to be.”

In March this year, Christine was recognised for her athletic prowess and faith at the 2013 Wise Women Awards (WWA), hosted by Wisdom for Women International alongside Keep The Faith magazine, where she was presented with the Inspirational Woman of the Year Award.

Christine seemed genuinely touched by the Award, and was even seen wiping a tear from her eye, as WWA founder, Pastor Marjorie Esomowei, read out details of the athlete’s impressive achievements. Christine recalls the WWA as a night to remember: “The show was a very powerful testament to what women are doing. I did feel really honoured to be there. I saw the calibre of the other achievers, and I kind of felt like I shouldn’t be collecting an Award – not amongst these women.

“It’s really touching when you hear people speak so highly of you. For me, I just run round, I don’t really think much of it. I really don’t. I go to train, I complain half the time, I don’t think much of what I do, but it’s nice that other people do. I don’t really see it. It’s just nice that other people are amazed by what you do. As I said, I just run. It’s not a big deal to me.”

Family is important to Christine. Born to Nigerian parents – her father is an engineer, her mother works for the Inland Revenue – Christine is the second eldest of eight children, and one of two girls. In fact, Victoria, Christine’s younger sister, is following her footsteps and is also an athlete.

Raised in the London Borough of Newham in a Christian family, Christine had an interest in sport from a young age, firstly playing netball, where she represented England at the Under 17 and Under 19 levels. She also joined Newham and Essex Beagles, and took part in her first international event at 17. In 2003, she won two bronze medals at the European Junior Championships. In between all her sporting activity, Christine also found time to study for a degree in Linguistics at University College, London.

Christine has attended an Anglican church in West Ham, East London, since childhood. Fellow church members, although proud of her achievements, don’t make her a focus of attention – she’s not a great fan of hoo-ha and fuss! Instead, worship services provide Christine with a place to get spiritual fuel and to re-focus.

With the athletics season now over, Christine has her sights set on the Commonwealth Games and, if she retains her competitive edge, will compete in the Rio 2016 Olympics. She is, however, starting to think about life beyond athletics. “At the moment, I’m very happy to keep on going for a bit, but you have to have a goal, something to work towards, otherwise the work is too hard to just do aimlessly without any good reason for doing it. So I will have a good think and a pray about what I think the next step for me is. I’m gonna be 30 next year, and I don’t have anything as yet, but as it stands now, I’m happy to continue.”