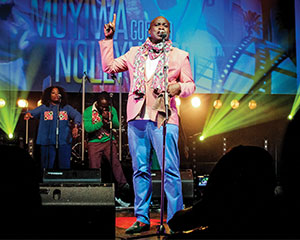 Muyiwa goes to Nollywood at The Forum

The audience gathered at The Forum in Kentish Town, North West London, were treated to gospel soul, African humour, African praise and pure unadulterated glamour at the Muyiwa Goes To Nollywood event, organised by OH TV, and hosted by radio presenter, producer and comedian, Ibe Otah.

During Muyiwa’s onstage interview with Joselyn, the audience learned that she is a committed Christian, whilst Omotola talked about her Nollywood career and the importance of family.

The evening closed with Muyiwa and Riversongz singing their most popular songs – and Nollywood star, Omotola, even got in on the act and sang with the group, ensuring the show closed out with both praise and glamour. 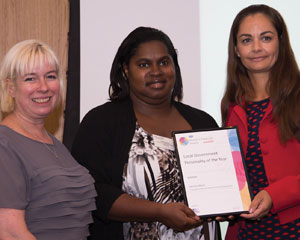 Sanchia Alasia is walking on air, after her work as Labour Councillor for the London Borough of Barking and Dagenham was publicly acknowledged at the prestigious Women in Public Life Awards, held in Borough, South London.

Sanchia, a committed Christian, received the Award for the Local Government Personality of the Year category. When elected in 2010, Sanchia was the youngest woman on the Council, and defeated the London regional coordinator of the British National Party, Robert Bailey, to win her place.

“I feel really humbled and privileged to have won this Award,” Sanchia stated, “considering the other shortlisted women in this category and their achievements. It’s wonderful to be acknowledged for my work in the local community.”

Book launch of ‘Thinking Outside The Box’

The great and the good were in attendance at the launch of Bishop Dr Joe Aldred’s new book, ‘Thinking Outside The Box on Race, Faith and Life’.

Luminaries present included Her Excellency Mrs Aloun Ndombet-Assamba, the Jamaican High Commissioner in the UK; Rev Rose Hudson-Wilkin, chaplain to the Speaker of the House of Commons; Dr David Muir, founder of Faith in Britain, along with his wife, Pauline; Andrea Encinas, founder of British Gospel Arts, and Dawn Butler, the former Labour MP for Brent.

The launch, held at Maroons – a Caribbean restaurant in Limehouse, East London – was presided over by Keep The Faith columnist, Juliet Fletcher. Thinking Outside The Box is a collection of articles and essays that have been inspired by Dr Aldred’s multi-faceted work, which includes serving as a Pentecostal bishop, broadcaster, writer, public speaker and social commentator. Topics covered include race, the Black Church, money and parenting.

By all accounts, it’s a good, stimulating and interesting read, so check it out. It is sure to broaden your thinking.