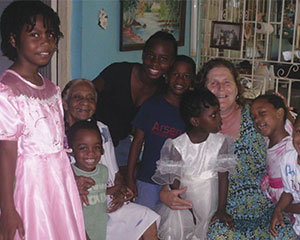 The Griffin (Charitable) Trust provides refuge for vulnerable children, women seeking respite from abusive relationships, and the elderly in Jamaica. Its founder, Moira Morgan, writes about her work, its challenges and successes.

I first came to Jamaica in 1977, spending three months in the then up-and-coming working class, residential area of Tower Hill, Kingston 11. This was just before the political ‘war’ that preceded the 1980 election. On my return to Tower Hill 18 years later, I found a zinc-fenced, poverty-stricken, socially-disenfranchised, politically-tribal, inner city garrison community, with a different gang and ‘don’ on every corner.

What haunted me most was the sound of children crying; their heart-wrenching cries constantly being heard above the sounds of gospel singing churches; raucous dance hall DJs, and the nightly barrage of gunshot. My own children grown up, I felt Christ was calling me to give service. 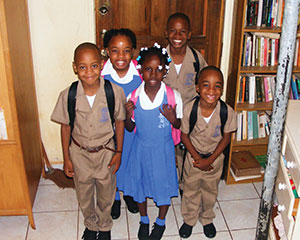 Poverty, neglect and abuse deny children of choices, and prevent them from fulfilling their potential. Our Charity seeks to change this, by meeting their needs holistically, including emotional healing, spiritual growth, education, relational development and health. By facilitating continued safe family contact, we will provide opportunity for successful, family reintegration for up to 600 children per year.

With the help of family and friends, The Griffin (Charitable) Trust was established to support the work which I had already started in 2001, and it became a charity in its own right in Jamaica in 2005.

Since 2002, the Trust has established community education and literacy programmes. Refuges and safe havens have been provided for young children; for girls fleeing sexual predation, and for women fleeing domestic violence. Other works undertaken include Summer Camp, gang mediation, prison rehab and literacy programmes and care for the elderly. 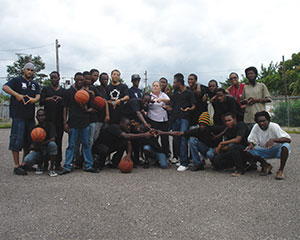 In November 2007, the horrific living conditions of two elderly men in need of end-of-life care, prompted me to beg some furniture from the local Hilton Hotel to furnish the unused second bedroom in my rented house. The two gentlemen were moved in and cared for throughout their last days by myself and two local volunteers; as a result, The Sanctuary was born. Following this, three siblings aged 18 months, 3 years and 5 years also took up residence. A few months later, another three siblings arrived, aged 6, 8 and 12 years, which necessitated more begged furniture. The Sanctuary is the only place where siblings can remain together as a family, and be provided with an environment that facilitates healing from their shared past of abuse, neglect and violence.

Moving to larger premises in 2009, we grew to twelve children, with one elder in residence, and three mothers in refuge. With no place to call our own, we have moved from rented house to rented house, with the remaining seven children changing schools three times in five years.

Local corporate Digicel Foundation, recognising our need and potential, has committed £40,000 towards purchasing our own property. We have found the perfect spot, and are raising the balance of £33,000 through campaigns on crowd funding website, www.indiegogo. com/projects/480137.

This property will enable us to expand to provide long term care for the children currently with us, and for up to another 36 children in short term residence, and provide family contact support for up to 600 children in foster care per year.

We urgently need help to maintain the resident children, and have to find sponsors to subsidise their care and education costs.

Why The Sanctuary? Child B shows what change can be achieved with a little unconditional love and care. He arrived in 2007, angry, frightened and unsure; violence his only remedy to everything…

Shortly after he arrived, I stopped Child B punching his sister. He shrugged me off, telling me who and who he was going to get to shoot, rape or kill me, and a few cuss words I had never heard before (yes, at 3 years old!!!!). “Hey lady, me nah take no chat from no browning.” It took every ounce of strength not to laugh at this pint-sized ‘bad-man’. I just picked him up, and let him know that this ‘browning’ was going to be in his face for a long time to come, so he had better start ‘taking chat’.

One year later, on the veranda at Constant Spring, Child B is sitting with his head on my lap, stroking my leg. He said, “Aunty Moira, when me get big, you know say me a go married you?” I replied, “For real?” He said, “Yep.” In pipes Child D, “What’s up with you, don’t you know say she a go get old?” “Well, when she old me a go care her you know.” “Are you, baby? What will you do for me?” “Aunty Moira, you see when you get old, me a go feed you, and me a go change your pampers every day.” Today, B is aged nine, and is top 2 in Grade 3; his marks are 92% or higher in his exams, and he has a reading level of Grade 5.

If you would like more information visit www.thegriffintrustjamaica.org or contact Moira Morgan email thegriffintrust@aol.com, telephone 001 876 7675 You can also sponsor a child at The Sanctuary by visiting www.betterplace.org/en/projects/6480

Ah, the joy of Christmas! by Rev Cassius Francis