Nonso Anozie appears as Samson in the hit TV series, The Bible, currently being broadcast on Channel Five. He spoke to Keep The Faith about his role, life and faith.

On November 30, Channel Five started broadcasting the popular series, The Bible which, when it was aired on the History channel in the US during Easter earlier this year, broke records and achieved the highest ever ratings for a programme broadcast on cable TV. It has been seen by 100million viewers.

Channel Five are no doubt hoping for high viewing figures… and there’s no reason why they shouldn’t get them. The series sheds new light on the age-old Bible stories in an entertaining way, and should hopefully start a national conversation about Christianity.

One of the actors featured in this series is London-born actor, Nonso Anozie, who is also a committed Christian, and plays the part of Bible strongman, Samson. Such was the impact of Nonso’s performance, that leading Black churchman, Bishop TD Jakes, and one of the world’s most powerful Black women, Oprah Winfrey, were tweeting complimentary comments about it.

Nonso is excited about being in the most talked about TV series of the year. “It’s a blessing from God. It’s amazing to be part of this project, because it’s spreading the Word of God so far and wide in one single sweep that it’s unbelievable. I knew it was special when I was working on it, and the way that I got the role, in terms of the amount of people it’s spreading the Word of God to. It’s also introducing people to the stories of the Bible for the first time.”

You could say that God played a hand in Nonso getting the job. Prior to starting work on a film called Enders Game with Harrison Ford and Viola Davis, Nonso had been at his church, Prevailing Power Ministry in Hendon, London, when his pastor asked him to read the story of Samson. He recalls that doing so resonated with him strongly. Little did he know that, five months later, he would get a call from Roma Downey and Mark Burnett, producers of The Bible, stating they wanted him to play the role of Samson. Nonso didn’t even have to audition for the role. “It was as if I was supposed to be part of this series.”

Nonso believes people can learn a lot from Samson. He shared, “The lesson for me about Samson is that he was the victim of the fact that he didn’t make good decisions. He chose a woman who ended up destroying him. He ended up eating things he wasn’t supposed to eat, and ended up asking for forgiveness. God forgave him, but eventually, as all human beings, he had to suffer the consequences of his actions. But even in that last hour, he asked God one last time and said, ‘I see more clearly than ever’.”

“The story of Samson warns us to make the decision to put God first. And also, no matter how bad it gets, to give yourself to God and He will be there for you.”

Nonso was raised in a Nigerian Christian family. His mother is a fashion designer, his father works in security, and faith in God played a pivotal role in his family. It was when he was 16 that Nonso made the decision to follow Jesus. He recalled, “Before that, I can say I was going to church as a child, but you don’t really know anything. You’re going because your parents go. I kind of stopped going church for a while, but rediscovered Jesus for myself. I think that was the most important time of my life when that happened.”

Nonso’s aspirations to be an actor led him to take a three-year drama course at the Central School of Speech and Drama. Following his graduation in 2003, he did a stint at the Royal Shakespeare Company (RSC), and became the youngest man in history to play the character of King Lear. He also toured the world, appearing in an RSC production of Othello, and then started doing a lot of films.

Films he has appeared in include Atonement with Kiera Knightly; Conan The Barbarian, Game of Thrones and Enders Game. He can currently be seen in Sky TV series Dracula, and is currently working on Walt Disney film, Cinderella.

Life certainly looks rosy for Nonso. His high profile appearance in The Bible has certainly helped to raise his cache, and he would be the first to admit that life is good.

It’s his prayer that British audiences embrace the series as Americans have, and that it at least gets people thinking about God. And re his own personal goals: “My first prayer is to have a closer walk with God, that’s the root of all things for me. After that, everything will follow. I really pray to get married soon and start a family, and that my relationship with my immediate family goes from strength to strength, and obviously I would like my career to go from strength to strength. I feel as though that next step is in God’s hands.” 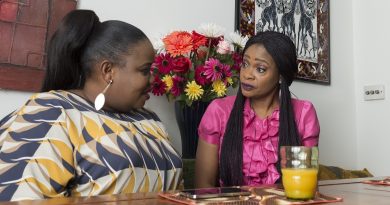