Welcome to People and Places, providing an insight into some of the things Christians are doing within the Church, and how they are sharing Gospel values in society at large

With a career spanning almost 30 years, Dave P is a legend in the radio world. He started his career in pirate radio in Birmingham; progressed to becoming a presenter on Capital XTRA (previously Choice FM); is now a presenter on Premier Gospel, and runs his own online radio station, Urban Gospel Network Jamz (UGN).

While on paper his CV may read like a dream, his life has not been without its challenges. He told Keep the Faith: “During the course of my career, I’ve had issues – be it financial or relationships – when I just wanted to give up and not broadcast at all.  I’ve had constant debates with God, when I’ve asked, “Why me?” and He’s always told me, “Son, it’s your ministry; you just have to do it.”

He certainly is fulfilling his ministry with his latest endeavour. UGN was initially set up as a web-based magazine for churches and artists, who needed their profiles raised. It has now developed into one of the most innovative gospel radio stations we have in the UK. Dave P is very discerning about what is played on his station. He told us: “You can’t tell me ‘It’s got Jesus in it, it’s gospel, you’ve got to play it.’ No, is it really good? Does it stand out? That’s what I listen out for. Quality stands out a lot, and people notice that.”

Despite now being a radio station, UGN has not neglected its roots. Dave P works tirelessly to provide support for a plethora of projects, from community-based initiatives to concerts. Last year, the station sponsored An Audience With Angie Le Mar. This year, they are sponsoring the MOBO-nominated gospel singer/songwriter, Lurine Cato, in concert on January 31st.

This spring, UGN will begin a series of their own concerts, which will showcase the best that the UK Gospel scene has to offer. Not only will these concerts promote good music, but they will also promote unity. Dave P is very passionate about breaking down the cultural lines which often impact the Christian community in the UK. He shared, “You have this culture now, where the Africans and the Caribbeans are not together; you have one concert over here, another over there… We want to change that, and bring great artists together on one stage.”

Meet Duro Oye, a multi-talented 28-year-old, who is making waves in a wide range of fields. He is a filmmaker/social entrepreneur/founder and chief executive of 2020 Change, a youth foundation seeking to revolutionise the way gang culture is dealt with in the UK. The Foundation was established to help young males, who have been impacted by gang culture, to discover a life away from crime.

Not a stranger to street-life himself, Duro was able to turn his around life by coming to know Jesus on a personal level. He told Keep the Faith: “I walked into church on 16th August 2006, and I never walked back out. My faith is my fuel; without it, none of this would have been possible.”

Duro also attributes his transformation to his older brother, who was a constant source of encouragement. With 2020 Change, he is extending this brotherly support to young men nationwide. He told us, “If you can touch one life, think about the impact that person will have within their family and their community.”

One of the main aims of the Foundation is to show former gang leaders the potential they possess, and to teach them how to channel it in a more positive direction, by setting up businesses and helping those they formally led.

The pilot programme of 2020 Change, Goldmine, was launched in October of last year. The 12-week programme mentored six young males from different backgrounds for three hours once a week. Issues such as ‘Understanding your mind’, ‘What is success?’ and ‘How to find your purpose in life’ were dealt with. The result? Two of the mentees have begun to develop businesses; two have successfully enrolled in university, and two have secured employment.

In less than a year, 2020 Change has already made a huge impact, and in 2014 the Foundation is on the trajectory to have an even bigger one. There is already high demand for Goldmine to be implemented within local authorities, as well as in prisons. Steps are being taken to implement the programme outside of the capital – with Birmingham and Manchester being next on the list. The female equivalent of the programme will also be launching later this year. In honour of the Foundation’s first anniversary, there will be a major screening of their film, Change, which will be released all over the UK. Watch this space.

Christians who want to see their stories reflected on stage, and believers looking to work on faith-based productions need to watch out for Silvano Griffith-Francis, an award-winning businesswoman, actor, playwright and producer.

Silvano has been writing Christian-themed plays since she was 17, and took a leap of faith last year by resigning from her job as a Business Development Executive at the BBC to further develop her company, SVG Productions.  Its aims are manifold. Silvano explained, “Firstly, it’s to provide a platform for Christian actors and directors to use their God-given talents without feeling they are compromising, and secondly, it’s to get more Christian productions into theatres across the UK.”

It’s currently all systems go at SVG Productions, as Silvano gears up for the third run of her play, Life Begins, a comedy drama which focuses on the lives of four Christians, who are 40 and single for a multitude of reasons.   Rob is divorced, and seeking to reconcile with his wife. Julie is trying to keep a straight head about her singleness. Steven is fussy – no woman seems to meet his high standards, and Amanda just wants to have a baby.

Life Begins has already been seen by over 800 people, and the figure will be surpassed when it is staged at the Broadway Theatre in Barking, Essex, over the Valentine weekend.  It is just one of a series of Christian-themed productions that Silvano aims to put on throughout 2014.

“In May, we are going to be staging Family Secrets at the Broadway Theatre in Barking.  It’s a play we’ve done a few times now, in 2011-2012 in London, Manchester and Birmingham.  I’ve also got a number of scripts which I am finishing off as well, so hopefully, if we can get the funding together, we’ll have two new productions out by the end of the year.”

Aside from being able to write entertaining dramas, Silvano, who has studied Theology, is a prolific traveller and loves different cultures. To date, she has visited over 38 countries worldwide, and she loves to cook.

More than that however, she is committed to entertaining believers and non-believers alike, through Christian art.  2014 seems set to be the year her artistry comes to the fore.

Dami Abajingin is a freelance journalist, lover of God, carbs and literature, in that order. Follow her at @dami___ 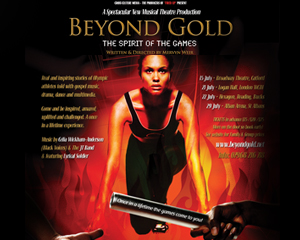 Women in the Pulpit by Akosua Dwomo-Fokuo