Jake Isaac is one of the UK’s rising young praise and worship artists, and is gearing up for the release of his second album, ‘Break These Chains’. He spoke to Keep The Faith about travelling the world, working with Worship Central, and getting his song played on Radio One.

KEEP THE FAITH (KTF): Congrats on releasing your sophomore project. What can music fans expect from this new album?

JAKE ISAAC (JI): Fantastic question! I don’t even know if we’re quite sure ourselves! lol… In all seriousness, a collection of songs and a worship album that will quite simply ignite a heart of worship in the listener and cause them to become more passionate about Christ, and seeing the will of God done in their lives!

KTF: What are the key messages you are seeking to convey through your songs?

JI: The key messages we have focused on with this album has been ensuring that biblical truth is conveyed, that people can stand on God’s Word through this worship. Also, that it’s through fervent prayer and worship that we, the redeemed, can see change in our lives and in the world around us.

KTF: You released your debut album in 2009, and have been busy ever since. What have you been up to?

JI: It’s been an absolute rollercoaster at times, lol! We’ve had the privilege of travelling around the UK and Europe, leading people in worship to Jesus, and also seeing many souls saved; it’s been absolutely fantastic!…On top of that, being nominated for a MOBO in 2010… that was such an encouragement for us as a team, as it was almost like God was showing us that He’s totally behind, in and before us, helping us to make an impact as we ministered, both in the church and outside! We have SO much to be grateful for!

KTF: You’ve recently come back from South Africa.  Any stand-out moments for you?

JI: South Africa was amazing! We had the massive privilege of ministering and sharing with about 250 leaders from across Johannesburg. God really moved and, as a result, there have been invitations to several other nations! In one school alone, after a time of ministry in an assembly, 91 teenagers gave their lives to the Lord – that was about a 4th of the secondary school! It was truly amazing!

KTF: I hear you’ve been busy collaborating with a number of artists, and are part of Worship Central (run by Tim Hughes).  What’s that been like?

JI: Again it’s been an absolute eye-opening privilege! I personally recently joined the Worship Central team, and it’s like I all of a sudden have gained a load of new friends, who do exactly what we do but in different parts of the body of Christ! To be able to share in our experiences and to hold each other up, being a part of that network, it’s almost like I’m experiencing another angle on discipleship, learning and growing together with some amazing people on the WC team.

KTF: You are cited as a worship leader to watch, and I hear you’ve had your music played on BBC Radio 1. How did that come about?

JI: The Radio 1 thing came about through the other side of what I do, ministry-wise, which is writing songs for people who wouldn’t normally attend a church. God’s been really amazing, in that the last singer/songwriter EP I made in October 2013 somehow ended up at Number 4 in the iTunes charts! I think I’m still blown away by how God did that! Off the back of that, ‘BBC Introducing’ then approached us, and hey presto…!

KTF: What should we expect from you and your ministry in 2014?

JI: As long as we as a band try and stay focused on seeking out what God wants to do, I have a feeling that we’re gonna keep seeing God save souls and drawing people closer to Him throughout 2014!

KTF: Describe yourself in five words.

Jake Isaac will be embarking on a Break These Chains mini church tour.  Visit www.iequalschange.me for more details. 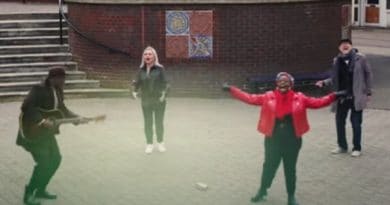