I really enjoyed Keep The Faith (Issue 85) with its focus on love, sex, marriage and relationships.  And it was very refreshing to read about husband and wife ministry team, Bruce and Janine Dyer. I welcomed the fact that, although they obviously love each other, they made it clear that marriage is not always a bed of roses, and that they do experience conflict. I also found it insightful and helpful that they confessed they were willing to seek counsel when they experienced marital deadlock. Their approach to problem solving in marriage illustrates great humility, a much needed quality. As far as I’m concerned, Bruce and Janine Dyer rock.

Pastor Clement Okusi’s article on what churches can do to build strong marriages was very timely.  With the high levels of divorce we are currently seeing amongst Christians, I think some church leaders could do themselves a big favour and take on board some of the suggestions featured in his article. If they worked at his church, they will work at others. Strong marriages form the backbone of strong communities and churches, and anything churches can do to encourage stronger marriages must be done.

THE TROUBLE WITH SUBMISSION

Dionne Gravesande really went there in her article about submission in marriage. As a single woman, I’m apt to agree with some of the points she raised.  Some of the single Christian men I’ve met, during my search for a partner, seem to think that submission entails them telling women what to do, bossing them around and generally putting them down. I was glad to read that love and submission go hand in hand. Made me glad that I did not come in an age when society gave men licence to boss women around. Thanks, Dionne, for shedding light on a subject that was difficult for me, and for helping me to understand it better.

OUR LEADERS SHOULD BE HOLY

Thank you, thank you, thank you, Esther Kuku, for your article, ‘Do You Hunger for Holiness?’ It served as a straight-to-the-point reminder that Christians are called to be holy. I, like Esther, was personally appalled by the behaviour of some of the ministers on reality show, ‘Preachers of LA’, and found it difficult to take some of the leaders seriously. If you are a Christian leader, and want people to follow you, then it’s imperative you behave in a Christlike manner; and, whilst we know God is forgiving, if you can’t live up to the high ideals of Christian leadership, then maybe you should step down.  In my view, it’s a shame that the folly of some of those featured in ‘Preachers of LA’ was put on display for the whole world to see, and just gave people another reason to mock the Church.

I ENJOYED ‘PREACHERS OF LA’

I read Esher Kuku’s article about holiness with interest, in particular, her comments concerning the ‘Preachers of LA’ reality show. My views of the show are totally different. I enjoyed the series, and it highlighted that, although we should respect our church leaders, we should not put them on pedestals or think that they are better than those who sit in the pews. Church leaders are imperfect human beings, who have been assigned by God to lead us and, although we should follow them, we must never lose sight of the fact that our ultimate leader is God. 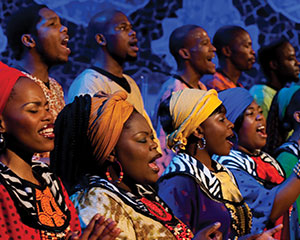 Juliet Fletcher was spot on with her article, ‘Bring Back Gospel Choirs’.  I’ve often wondered why churches were quick to embrace praise and worship teams and, in the process, abandon choirs. I love a good choir, particularly when they sing an inspiring song that lifts one’s spirits and gives one hope.  And, as Juliet rightly mentioned, choirs also provide a great way for new converts to get involved in public ministry within a church. Let’s not just bring back church choirs, but let’s look about seeking to raise the vocal quality of choirs, so that people are not only drawn to their soulful sound, but to their vocal excellence also.

It was very sad to read about Bishop Gerald Edmund. Why on earth did he allow himself to be duped by an internet scam? And why did it take the church so long to realise that money had gone missing?  Two things stand out in this story for me. The first is that our leaders must not only start well but finish well, too. I hope that whilst serving his sentence, Bishop Edmund not only experiences God’s forgiveness, but that he is also used by God to share a message of hope to the prisoners. Secondly, all churches must see this story as a life lesson, and implement the right checks and balances to stop such a thing happening in their own organisations.

We need more sermons about Jesus

Jamaica is the best