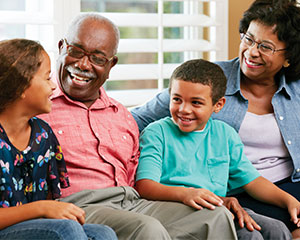 Rev Stephen Brooks looks at the important role grandparents play in passing on Christian values to the younger generation, and argues that they are the future of the church, too

God has a role for Christian grandparents, but what is it? Paul indicates, amongst other things, that they have a bridging role, in transferring Christian beliefs and standards between generations, so that the bond between the generations does not just look back, it also looks forward.

Apart from travelling on public transport, church is one of the few places in our society where all of the generations still gather in one place at least one day a week. Sadly, little opportunity is seized to utilise this gathering and connect the generations in meaningful and life-changing relationships as God intended them to be.

Much has been written about grandparents born between 1945 and 1965 (often referred to as ‘baby boomers’), who comprise the largest proportion of church congregations today. This generation of grandparents is associated with privilege, as many grew up in a time of affluence. They are also the healthiest and wealthiest generation, and amongst the first to grow up genuinely expecting the world to improve with time. It is also true that the baby boomer generation has done well out of the Welfare State, and are set to take out approximately 118% of what they put in. They are also associated with a rejection or redefinition of traditional values: remember the Swinging Sixties!

Today, we are in a battle for the minds and hearts of each of the emerging generations of our time, and Christian grandparents should be front-line warriors in that spiritual battle! The Bible tells grandparents, repeatedly, to pass on their experiences, and to teach the next generation.

The Bible has a special place for the role of grandparents and the blessing of grandchildren. Psalm 128:6 says, ‘Yea, thou shalt see thy children’s children and peace upon Israel.’   There is a sense in which one can have children, and that is well and good, but it is only when grandchildren arrive that there can be an assurance that your generations are indeed continuing.  Proverbs 17:6 states, “Children’s children are the crown of old men; and the glory of children are their fathers.”

Today we are in desperate need of Christian grandparents, who will stand up to be counted and hold up the ‘light’ of God’s Word

Renovation is a common word in today’s vocabulary. It simply means ‘to renew to an original state or condition’. Without a little renovation from time to time, traditions also have a way of deteriorating, so that the original purpose and meaning is lost. That’s why God instructed Hebrew parents to explain the meaning of the festivals they observe to their children, so they would understand. Churches should intentionally cultivate an inter-generational ministry, which focuses on strengthening the grandparent/grandchild relationship.  In a time when immorality and secularism are ferociously sweeping over our land, seeking to swamp the minds and hearts of our youth, a more radical restoration is required to keep our traditions fresh, relevant and meaningful.

As Easter and Pentecost approach, it provides a great time for grandparents to discuss with their grandchildren the meaning of the cross and the resurrection. Why not ask the grandchildren to accompany you to Sunday school, and share some ideas to make the season even more memorable and meaningful for them?  In the process, you might even discover a new tradition for your family. A little renovation is always good.

Several months ago, I was talking with a grandfather, who recounted a conversation with his son and grandson.  The grandson asked his father, “Where does the rain come from?” The dad replied, “The clouds.”  The son then asked, “Where do the clouds come from?” His dad said, “God.”  The son asked in reply, “Who is God?” At this point in the conversation, his grandfather said, “It’s time I took you to Sunday school!”

There is a huge need for belonging and connecting among every generation.  At times, we need to deconstruct many of the church departmental barriers, where each develops their own culture perpetuating the generational divide. The grandparenting role is one which can reverse this trend.

The young Bible evangelist, Timothy, was doubly fortunate that his grandmother, Lois, was also a believer in Christ. He had a spiritual advantage over many of his contemporaries, having been taught the Scriptures from early childhood (2 Timothy 3:15). Let’s not forfeit passing on our grandchildren’s advantage!

We need to acknowledge that older people are the future of our church, too, and we need to look to their example and seek their wisdom. The primary role of Christian grandparents is to model what God wants the next generation to become, and to bring them to faith in Christ.