Meet Vidal Juba, Head of Channel Management of award-winning OHTV. When he isn’t jetting across the world to establish the OH brand, he is a drummer with his brothers in the gospel band, Four Kornerz. Alongside his busy schedule, Vidal is a loving husband to Chantelle, and doting father to his young son, Eden. Vidal spoke to Dami Abajingin about his career, his spiritual journey and what he has next in store.

DAMI ABAJINGIN (DA): You wear many hats: husband, father, station manager, drummer for Four Kornerz – how do you juggle it all?

VIDAL JUBA (VJ): Four Kornerz has been going for about 7-8 years; we took a break for two years to deal with family. In that time, I got married and had a son; my younger brother and older brother also got married. Deji is the only one left, so we ask you to join us in prayers for him, lol.  But now we are back. One of our tracks, ‘Lean on my Shoulder’ came out recently; the video is now out. In terms of being a dad and husband, I am doing the best I can; I’m learning every day, which is the same with OHTV. It’s a daily learning curve. Juggling all of this requires a serious backbone, which can only be God.

DA: How did you find yourself in the media industry?

VJ: At university, I was heavily involved in productions and sound engineering. I recorded and produced Yolanda Brown’s first album in my uni room. A friend of mine said his church needed a media team, so I went there, showed the pastor what I could do, he loved it, and he employed me for three months to build his media team. After that, he requested I stay as the head of all of his workers for another six months. When that time came and went, he said, “You’re not going anywhere; I need you to be my PA.” A year into that role, an opportunity came for the church to start a TV channel, and I become the station director. As with most Christian channels, it wasn’t making money at the start, but I spent two years building up a sales team, and we turned that around.

DA: How did your career at OHTV start?

VJ: Akin Salami, the CEO of OHTV, and I were at a mutual friend’s one evening. I was on my laptop, calculating how much money we had made that month. Akin saw and was amazed at the amount. At the time, I was thinking of leaving the station because it was taking a lot out of me. I was the first there the last to leave; I would work three days straight, and my wife was expecting our first child at the time. Akin told me there was a job at OH if I wanted it. I was absolutely floored, because I had always been an admirer of the station and their work. So that’s how I started at OHTV.

DA: What have been your most memorable moments with OHTV thus far?

VJ: When we were commissioned for ‘Time to Shine’ was definitely memorable. As was being commissioned as the Creative Director for ‘The Experience’; it is the biggest gospel concert in Africa. This year, they had over 600,000 people turn up. I really thank God for the success of ‘Naija Bites’ – that’s another milestone.

DA: What were your aims when you started working at OHTV?

VJ: Developing the production arm of the network was one. In addition, ensuring the station is a good support system to the church, by supporting church initiatives and events. We have revamped UPRISE MUSIC TV, which is essentially the youth ministry of OHTV. We had a successful sell-out concert last year with Mali Music. We had a birthday bash with Da Truth the other day, which was great.

DA: Do you view your work at OHTV as ministry?

VJ: The outlook of the channel isn’t ‘ministry’, quote-unquote. You won’t get a preacher on here, 24/7. Our strategy is slightly different; we are in the entertainment section of the Sky channel. Our viewership is mostly non-Christians. What we do is use family entertainment and production values to attract viewers, and then we impart our morals in our programming. You see a programme like ‘Lasting Love’, it deals with relationships, albeit from a Christian perspective. We are not trying to denounce our Christianity, no, but we are using a different approach to get our viewers’ attention.

DA: Tell me about your upbringing.

VJ: My upbringing was what I would say was the typical Lagos-style. My mum was the main nurturer, whereas my dad was the breadwinner. My parents sacrificed a lot; they essentially put their lives on hold to ensure my brothers and I had the best education. In 1996, my family relocated to London. The cultural difference was very apparent; when we came over here, we spoke Queen’s English. When I needed the toilet in class, I would ask if ‘I may please ease myself’, which obviously attracted a wave of bullies. The way I identified things was also different. One year, when Mufti day was coming up, I declared I was going to be wearing my Tommy Hilfiger top and my Moschino knickers. What I meant was knickerbockers, as in shorts – not the female underwear garment! Let’s just say, my life was not the same in that school.

DA: When did you become a Christian?

VJ: My family always went to church, but it was that old school ‘being a Christian for the sake of being a Christian’ thing; the personal relationship was not there. In 1992, my mum became a born-again Christian, and we started attending the Redeemed Christian Church of God and, through that, my brothers and I got involved in music ministry. When I was about 12, I accepted Jesus as my Saviour.  A close family friend tried to commit suicide, and that really impacted me. I was like, ‘God, I just want to be like You. I want You to protect me.’ I was kind of scared into it but, of course, that developed.

DA: How did it develop?

VJ: The real turning point in my walk was when I was in my second year of university, at Nottingham Trent.  I had failed my first year; I was coming out of a relationship, which was very volatile – everything was messed up. All the while, I was a part of this well-known Christian band. On one occasion, I was in the club and someone said, ‘If Vidal from Four Kornerz can go clubbing, then it’s fine for me.’ That changed everything. I decided I needed to do certain things differently. I started Elevation Project, which was a club night for Christians. I basically funded it by myself on my student loan, but I couldn’t sustain it. My church had a youth group called Radical Youths, and I was drafted into becoming the co-ordinator for that. I started up the fellowship in Nottingham Trent; I also spearheaded the Birmingham Fellowship, which has now reached 12 cities. During this time, I also met my wife, Chantelle, who was then my girlfriend. She is a very strong Christian; she’s that Proverbs 31 Woman. She also helped me, not only in the spiritual way, but practically as well. There was a time when I was broke, and she would give whatever it was she had to help me. I decided that if we got married, whatever I have she gets everything.

DA: Do you feel Christians have a responsibility to be at the fore of media production?

VJ: Yes, we do. Media is one of the pillars of society. If the Media lacks morality and integrity, it is very important as Christians to show the better way of living to influence society. It is important to use the Media as a tool to evangelise, but we can only do that if we are at the top of our game. We have the responsibility to do what we do with the spirit of excellence. I feel that a lot of times Christians excuse mediocrity for ministry, meaning: ‘It’s voluntary, it’s not being paid for’, therefore anything will do, and that’s wrong. It’s for God, so it should be the best.

DA: What are your hopes for Christian/Black media in the UK and beyond?

VJ: My hopes are that Black media will rise, in the sense that the level of expertise will increase within Black media, in order to put it at the forefront of community influence. OHTV continues to invest in Black media: we have internships, and we provide training. We send people onto courses to constantly build people, not just moments. Dean Charles is one such person; he made ‘Hard Time Bus’, which won best feature film at the Hollywood Black Film Festival.

DA: What can we expect next from OHTV?

VJ: This year, we are looking to bring more Caribbean entertainment to the channel; we have been developing a lot of new programmes. We recently came back from Jamaica after filming ‘Home Sweet Home’ with Angie Le Mar, which featured the likes of Levi Roots and Shaggy. We are also developing a Caribbean channel. We also have a magazine, which we produce internally that will really be taking shape this year. We’re also doing a lot more concerts that we are covering, and producing DVDs at affordable prices for the artists, so that we can help and encourage them to keep releasing music.

DA: Finally, what message would you like to give Keep The Faith readers?

VJ: I just want to say thank you for those who know and support OHTV; we don’t take you for granted. For those who don’t, I would like to encourage you to get to know us, and let us know what you think. We are ultimately here for you. 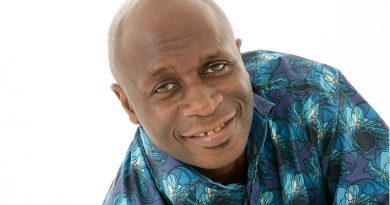 One thought on “Interview with Vidal Juba”