Dionne Gravesande explores leadership: looking at the role of leaders, how Christian leaders can be a force for good – no matter what sphere of leadership they occupy – and why it’s important to train future leaders

Last month, Maria Miller resigned as culture secretary, following a row over her parliamentary expenses, but what was the dispute all about?  Well, it appears Mrs Miller over-claimed £45,000 for expenses towards her mortgage and council tax.  After initially being asked to repay the whole amount, she only repaid £5,800 and, although she apologised ‘unreservedly’ to Parliament, the length and manner of her 32-second apology was criticised by many. It did not reflect the severity of the issues and lacked integrity. In fact, many feel she had been let off lightly compared to other MPs, who had to repay much larger sums in the wake of the 2009 expenses scandal.

Maria Miller was elected as MP in 2005, and rose to become one of the most senior women in the Conservative Party.  There is no doubt she was a high-profile leader, put in charge of getting laws through, including the laws to legalise gay marriage. While I have mixed feelings for Maria’s activities, I do not doubt she has worked hard to achieve her success.  But her leadership reign will be remembered by the manner in which her career fell short.

Leadership is more than privileges, high salaries or sheer power. Being a leader means the responsibility of service to others – the people who follow you.  It’s easy for us to accept praise – and deflect criticism – but a great leader accepts the blame when things go wrong.  Great leaders inherently know this, and they understand that the benefit of being a leader is also weighted with accountability. So, how much more important is the integrity of Christian leadership?

We’ve all heard that leadership is influence, but there’s also a responsibility that comes with leadership, and too often this is overlooked. It should go without saying that a great leader forges ahead, making a path and showing the way, and yet many of the would-be leaders never make any progress on such paths. It takes guts to strike out on a path, and it takes greater guts to ask people to follow your lead, especially when the path ahead is still uncertain. (But is that not why we have faith in something bigger than ourselves?) This is perhaps the great test of a true leader.

Many Christians exert influence over others in all kinds of ways. Some are leaders in the church setting, either ordained or otherwise; others exercise leadership in ‘secular’ positions. Still others are preparing for lives or careers in which they will exercise significant influence over people, organisations and networks. At the same time, it is argued that many Christians do not know how to link their faith to their sphere of influence. I am minded that, whenever we get into this area of discussion, we often produce more questions than we have answers.  For example, what does it mean to exercise distinctively Christian leadership in the contexts of workplace or church?  Or what has the Christian faith to offer as a model of leadership in the 21st century?  For me, the answer has something to do with prophetic vision, courage and faith.

Prophetic leadership’s main concern is to further the mission of God’s people and communities; it has an innate sense of knowing the mind of God on issues concerning growth and transformation. Such leadership has the ability to discern the spiritual realities in a given situation or community. This leadership communicates the elements of the spiritual realities in a timely and appropriate way, and leaders are concerned that changes made today are needed to progress into the future. The prophetic leader seeks integration between spiritual realities and immediate need, ie. the prophetic and pragmatic approach. It is important to question this, freely disturbing the status quo and challenging individuals and organisations to move in a different direction.

Prophecy could be described as:

The truth is, we may all fall short of this list. We are accountable to both God and to His people. Not only are we to cast a vision for our followers, we need to be leading them in the right direction. If we’re leading our followers in the wrong direction, even great leadership won’t make up for the misdirection.

A note of caution: leadership is not forever. Your time as a leader lasts only so long, so leadership is finite and, one day, you’ll need to be replaced.  It’s our responsibility to discover new leaders, and to train them in a way that they can succeed after you’re gone. Don’t wait until it’s time for you to leave before you plan and prepare for future leadership and build for transition. Scripture reminds us that ‘Iron sharpens iron’, and so one person sharpens another (Psalm 27:17) through our prayerful governance.

Remember, it is a privilege to serve Christ! 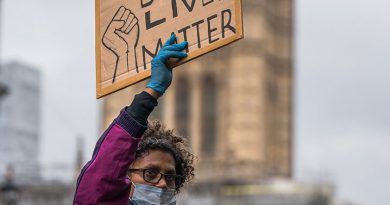 Taking to the streets in support of BLM UK