CHURCHES NEED TO UNITE AGAINST GANGS AND CRIME

I’ve written about this issue many times before and, in the last edition of Keep The Faith, we focused on youth, gangs and crime, but I’m more than willing to continue harping on about it until I see our church leaders join together to address the knife, gangs and crime issue in a united, coordinated fashion.

Last month, the death of yet another young Black teenager hit the news headlines.  David Headlam, 18, the son of Bishop Alonzo Headlam of the World Vision Apostolic Church of Jesus Christ in Harlesden, north-west London, was walking home in the early hours of Sunday morning and was chased by two men, stabbed and bled to death. Another young man dying. Another family crying. And a community left asking, exasperated about the senselessness of it all.

Although there are churches and individual Christians doing some stellar work with at-risk young people and gang members, I would argue that the Black community and wider society are still looking for Black church leaders to work together to combat this issue.

Here are some reasons why church leaders must do so:

I believe strongly that churches are more than up for the challenge to have a positive influence on the lives of our youth. Congregations are full of skilled, willing individuals, who want to roll up their sleeves, muck in and make a difference, so as to rid our communities of the terrible scourge of knife, crime and gangs.

But we desperately need our church leaders to join hands together and lead the charge.

OUR YOUTH CAN DO GREAT EXPLOITS FOR GOD

When the Apostle Paul wrote: “Let no one despise your youth, but be an example to the believers in word, in conduct, in love, in spirit, in faith, in purity,” to Timothy, his young mentee, I don’t think he realised these words would serve as a constant reminder to young Christians that their contribution to the Church is just as valid as that of older believers.

And, in 1 John 2:14, the Apostle John states: “I have written to you, young men, because you are strong, and the Word of God abides in you, and you have overcome the wicked one.”

These Scriptures are a reminder that young Christians matter, and that they have something of worth to offer the Church.

It’s easy to forget this fact when we constantly hear negative stories about young people, but many of the Bible characters that we love and adore – Joseph, Samson, Samuel, David, Daniel, the disciples and Jesus Himself – were called to serve the Lord when they were young.

So, let’s be mindful that our youth have a place in church, and that they possess all the necessary attributes to do mighty works for God. Let’s just give them the support and opportunity to fulfil their spiritual potential.

DO CHRISTIANS LOVE THE WORLD?

I’m an ‘old school new school’ believer – one who loves some aspects of the old church but who also embraces the new.

I became a Christian in the 80s, and learnt about Christianity from church leaders of the Windrush Generation. They were passionate about Jesus; believed Christians should be different from non-Christians; taught about right and wrong, sin and hell, and disciplined believers for violating church codes.

How things have changed.

Nowadays, Christians don’t want to be different from the world; aren’t keen on hearing messages about sin and hell, and churches seem loathe to discipline members when their behaviour is off key. Believers also seem to have developed a penchant for the things of the world – the fame, the riches, recognition and status.

This is understandable.  Kind of.  The things of the world are attractive.  Enjoyable.  Pleasurable.  That’s why the devil tried to tempt Jesus with all the kingdoms and splendours of the world if He would just bow down and worship him.  Jesus refused.  And so should we.

The values of God’s Kingdom and the world will always be at odds with each other.  That’s why the Apostle John wrote: “Do not love the world or anything in the world. If anyone loves the world, love for the Father is not in them.”

The truth of the matter is that a true, real, deep love for the Lord will make ‘love for the world’ abhorrent, even when tempted.  Christians should be different from the world, evidenced by our love for God, each other, our behaviour and attitude.  So, the next time you feel ‘worldly’ and tempted to blend in with the world, remember that God called you to be different. 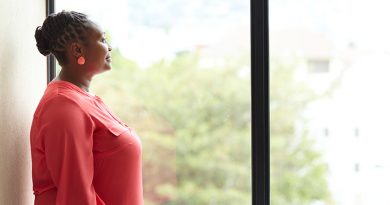