New, up-and-coming actress, Kee Broussard, is being proclaimed as a scene-stealer in the film, Christmas with the Karountzoses, which is being considered a must-see this winter season.

Ms Broussard plays Althea, the fiancée of her ‘Greek teddy bear’, Angelo, who has been invited to a Christmas Eve dinner by his friend, Michael Karountzose, who has been told he’s in line for a promotion and wants to celebrate. When Michael learns that the promotion won’t materialise, he has to re-think his attitude to work, life, family and faith – in front of his dinner guests.

Althea adds some fun into an evening that develops into an introspective affair and, in the process, helps the Karountzoses and the fellow guests get their life back into balance and re-connect with God and themselves.

Keep The Faith spoke to Kee Broussard about her role in Christmas with the Karountzoses, her acting career and her plans for the future.

KEEP THE FAITH (KTF): What was your reaction when you found out that you had won a role in the film, Christmas with the Karountzoses?

KEE BROUSSARD (KB): Well, my first reaction was disbelief, because this was the first major audition I had ever had; at this point I’d only been acting for six months.

KTF: Some people, who’ve seen the film, say that you steal the show.  How do you feel about receiving such accolades for your performance?

KB: I know I will say this word a lot, but it’s the only word I feel can truly answer these questions and that word is disbelief. It’s crazy that people love my performance this much; I knew the film was good, but I felt that all the characters played the heck out of their part.

KTF: Can you tell me a bit about the character you play in the film?

KB: Althea is an older, single woman, who decided to date outside the box and fell in love with her Greek teddy bear, Angelo. She’s hoping that he’s the one, she loves family and she wants so much to be a part of his family.

KTF: Christmas with the Karountzoses has a strong faith-based element.  How important is the role of faith in God in your own life?

KB: My faith in my God is a VERY personal and important relationship. It’s a relationship that I take extremely seriously, and I know it might sound strange, but it’s also a very private relationship I have with my God.

KTF: What are the main things you’d like people to feel/experience from watching the film?

KB: I want them to come away remembering the people they love, and how important they are to them. I want people to realise that material things will come and go, but relationships with family, true friends and especially God are irreplaceable.

KTF: Can you tell me how and when you decided to get into acting, and how did you get your big break?

KB: Well, as of today, I’ve been acting for about a year and a half and, on my big break, I would have to say Robert Krantz took a chance on a brand spanking new actress and hoped for the best.

KTF: What does 2015 hold for you where your acting career is concerned?

KTF: How will you be celebrating Christmas?

KB: Like I always do: with my best friend in the world, my husband Tony, and my two blessings – Jaidin (17-year-old son) and Leilani (7-year-old daughter). We get a huge tree, and on Christmas Eve we drink eggnog and play board games until the baby girl goes to sleep. Then the rest of us sit up and make sure Santa brings everything on baby girl’s list (lol). 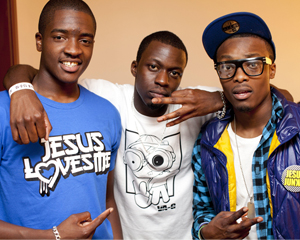 Guvna B By Lori Powell