Following recent child abuse cases within wider society and the Church, Richard Reddie delves into the issue, and argues that more needs to be done to protect children within key institutions

In the build-up to this year’s FA Cup Final between Arsenal and Hull City, I happened to watch a television programme that left me troubled. It was a retrospective of Cup Final Day editions of World of Sport, a Saturday afternoon ITV1 sports show I used to watch as a boy in the late 1970s. This programme was replete with interviews and news footage, and my disquiet was caused by the fact that many of those it featured were famous pop stars, television presenters, disc jockeys and politicians, who are now accused, jailed or dead (child) sex offenders.

The death of Jimmy Savile, and the resulting revelation that he was, according to the NSPCC, “one of the most, if not the most, prolific sex offender that the NSPCC has ever come across”, has led to a number of arrests, prison sentences and major enquiries into historic sexual abuses. The Savile scandal has also led to a great deal of soul searching over the way our society values and cares for its children. The National Crime Agency’s Cyber Crime Unit has estimated that “50,000 people in the UK have been involved in sharing child abuse images online, [and that] in the past 20 years the number of images available has soared to tens of millions”.

One shocking aspect of this scandal is the way it has encompassed those institutions that form the pillars of our modern society. Savile worked for the BBC over several decades, and allegedly perpetrated many of his ghastly acts on its premises, as well as on National Health Service property. Both institutions are carrying out investigations into these accusations.

Parliament is also embroiled in this disgrace; firstly, in the corpulent form of the late Liberal Democrat MP for Rochdale, Cyril Smith, who was accused of abusing children in care homes. Moreover, it has been alleged that, during the early 1980s, the late Tory MP, Geoffrey Dickens, compiled a dossier detailing a Westminster paedophile ring. The Coalition Government has also promised a thorough enquiry into these allegations.

There are also suggestions that the police were remiss in failing to investigate the allegations levelled against both Smith and Savile. When they did interview the latter, the television presenter appeared to run rings around his star-struck, hapless prosecutors. Conversely, several officers serving during the 1970s now allege that pressure was placed on them to drop certain investigations into well-connected, suspected sex offenders. (The Metropolitan Police launched Operation Yewtree to investigate the sexual abuse allegations against Jimmy Savile and others.)

In the lead-up to the new millennium, there was much talk about ‘postmodernist’ societies. Although this phrase was constantly being used, many were unable to provide a pithy explanation for an idea, which arguably described societies that “questioned moral absolutes and age-old truths”, and were characterised by a “breakdown in trust of certain institutions”. While it would be wrong to suggest that our society is a truly postmodern one, the Savile outrage has created a real crisis of confidence in those authorities and institutions we are meant to trust. For instance, an exclusive poll carried out by Ipsos MORI found that 56 per cent of Britons do not believe that the authorities will carry out an impartial enquiry into historical child abuse, and that establishment figures would attempt a cover-up if such scandals happened today.

It is said that the Church, which is arguably the oldest institution, is the only one that can be trusted today. Sadly, even our veritable establishment is not immune from the current controversy, as Pope Francis recently estimated that around one in 50 serving priests may be paedophiles, while the Archbishop of Canterbury, Dr Justin Welby, suggested that the Church of England should steel itself for its own child sex scandal. Any abuse of children has no place in the Church or society, and must be condemned and rooted out.

Christians should not be surprised to find the Church implicated in this scandal, as it often reflects the best and worst of society, and is full of sinners in need of God’s grace and the Holy Spirit’s transformative power. The obvious difference between the Church and other institutions is that we tend to hold the former to higher standards. When Parliament endured its ‘expenses scandal’ and ‘cash for questions embarrassment’, many argued that this was typical of avaricious politicians on the take. However, even in our often cynical society, a scandal involving a local pastor or priest is headline news, because we expect more from those who claim to be working for the Lord.

The pronouncements of the Pope and the Archbishop of Canterbury are both a sober warning and a sombre reminder that the Church is not insusceptible to practices and behaviours that ruin lives and undermine trust between adults and children. Our response should be to redouble our prayers, and explore practical ways to provide emotional and physical support to those who shoulder the burden of leadership in the body of Christ. Equally, we need to ensure that robust child protection policies are in place in all our churches, and that we adopt a zero tolerance attitude to anything that even hints at child exploitation. While this may not directly rebuild the trust that may have been lost in our institution, it will ensure that children are seen and not hurt within it. 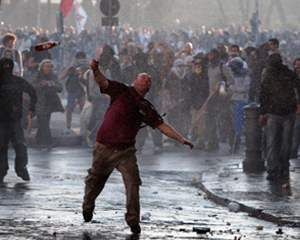 Do Christians have a Moral Duty to help by Rev. Stephen Brooks