They couldn’t stand or even stretch their hands to greet us when we arrived at their village. Their limbs covered in ulcerated, itchy, painful clusters of nodules that looked like honeycombs. There was hardly a smile on their dusty faces. The children of Kianjai village looked weary from a jigger infestation that they thought to be a ‘curse.’

It was the annual, week-long Compassion Leadership Development Program (LDP) mission in May 2013. This time, we were visiting a small village in eastern Kenya to share the Gospel with a community where alcoholism, teenage pregnancy and poverty are prevalent. I was excited about sharing the gospel, but when I saw these children I knew that the words ‘Jesus loves you’ might not mean much when dozens of nasty little bugs – jiggers – were burrowing into their tender skin, sucking the life out of them.

Their homes were in deplorable conditions; entire families infested with jiggers. In one home, a three-year-old boy was left in the care of his eight-year-old brother, as the mother went to fetch food. Their father had not been home for days. The older boy had been missing school immobilised by jiggers. The younger boy sat awkwardly on the ground as flies hovered over exposed wounds. He hardly acknowledged our presence.

I stopped, placed my Bible on the dusty floor, and sat next to him. He burst into tears the moment I touched his hand to greet him. The touch was too painful.

I’d had jiggers as a young child, I know the isolation and humiliation that goes with it.  You are stigmatised; asked to play separately for fear of spreading the bugs.

My life had been very different to these children though; my mother would clean me and dig out the bulging jiggers using a sewing needle. It was painful. But it worked. My teachers at my Compassion project were always interested in my progress – even that of my feet. And I always knew that my sponsors Paula and Brentone cared about me. They wrote encouraging me to believe that all things would work together for my good, and I knew they were praying for me and my family.

But no one was caring for these children. They had lost their hope.

We put our Bibles aside, folded up our sleeves, and filled buckets with water and antiseptic. One by one, we dipped their feet into the mixture. It was hard to see the children cry as the antiseptic kicked in, agitating their already battered limbs.

Over the next few days, we reached more homes. As word spread around, we were joined by more adults who helped to sweep and spray jigger treatment around homes. The more we worked together, the more the people opened up and shared about their lives – their happiness and hardships. At the centre of it were their children, whom they hoped would have a brighter future.

We shared our stories too, but most importantly, the word of God. The more we poured ourselves into them, the more they accepted us and the message we brought with us. At the end of the mission, over 70 people became Christians. It warmed our hearts to see the smiles on their faces as they waved us goodbye.

Four months later, I had the chance to visit the same area again with my school’s Christian Union and decided to go to the specific homes where we had ministered months before. I was greeted by cheerful children. They didn’t have ulcerated toes and fingers or painful lumps, only scars.

The little boy stood for a short while to greet me. He didn’t cry. His eight-year-old brother was ready to go to school because he could walk comfortably.

The cleanliness in the homes caught my attention. There was a new sense of pride. It was overwhelming to see how such a small mediation had lifted the people of Kianjai. The ‘curse’ had been lifted. As we washed their feet and bent down to clean their yards, we had reached their hearts and made the love of Jesus known to them.

Meeting these families has opened my eyes and made me sensitive to the world around me. I’m being transformed into a different kind of a leader; a servant leader who will continue to reach out and meet the needs of those around me. 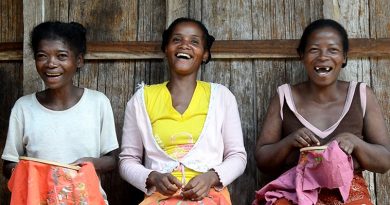 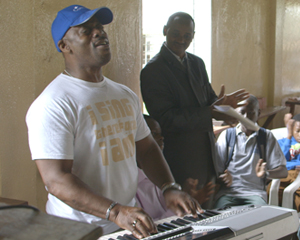