MOBO Award-winning artist, Triple O, is gearing up for his headlining concert, which takes place on May 31 at XOYO, 32-37 Cowper Street, London EC2A 4AP. This concert is a celebration of Triple O’s 10th anniversary ministering as a gospel rapper. He’ll be joined at this event by a host of fellow rap artists, including: Faith Child, Jahaziel, Kersha Bailey and others. Tickets are £10 in advance, £13 at the door. Visit www.tripleo-music.com for full details.

Renowned film director, Bill Duke, is due to start work on a film depicting the life and career of the world’s first ever gospel megastar, Mahalia Jackson. She was described as the Queen of Gospel, and came to the fore working alongside the founder of modern gospel, Thomas Dorsey, in the 1930s. She famously refused to sing secular music – that didn’t stop her from achieving 12 million selling albums. Fellow gospel superstar, Yolanda Adams, is being mooted as the actress to play Mahalia on the silver screen.

Life just seems to be getting better and better for gospel TV star and singer, Deitrick Haddon. The reality TV star recently revealed that he and his wife Dominique (pictured) are expecting their third child. Deitrick married Dominique in 2013, after she gave birth to their first child, and has seen his career and family steadily expand since then. The singer is due to go into the studio to start work on his second album. 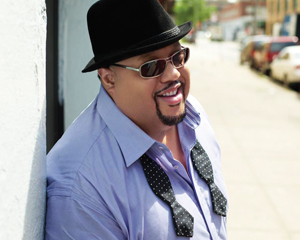