For nearly two decades now, Kirk Franklin has been a multi-platinum-selling purveyor of majestic fusions of gospel and contemporary music, and a mirror of Christian humanity, boldly reflecting what a man of faith can accomplish, when he focuses on God and taps into the gifts He gives.

Franklin is a pioneer in gap-bridging musicianship, uniting audiences across gospel, hip hop, R&B and pop lines. His irresistible rhythms and rhapsodies have resulted in albums that consistently top both Billboard’s Gospel and Christian charts, as well as ascend triumphantly into the Top 10 of the R&B/Hip Hop chart.

His unprecedented reach into the mainstream has positioned him to become a New York Times bestselling author of The Blueprint: A Plan for Living Above Life’s Storms (Gotham/Penguin). Franklin is also the host and executive producer of the gospel talent show, Sunday Best – the highest-rated gospel programme in BET network history, now into its seventh season. To date, the musical trendsetter has garnered nine GRAMMY® Awards; an American Music Award; 39 Stellar Awards (gospel); 16 Dove Awards (CCM); eight NAACP Image Awards; two BET Music Awards, a Soul Train Award and numerous others.

And yet, with all of his success, accolades and acclaim, Kirk Franklin remains, at heart, a man who comes from humble familial beginnings, whose shaky circumstances could have paralysed his spiritual growth. He is never far from the frightened and forlorn young man of his childhood, who didn’t always know which way to turn; this is what makes Franklin one of the most relatable and respected messengers in his field. Keep The Faith caught up with Kirk Franklin and asked about his childhood, musical inspirations and family life.

Keep The Faith (KTF):  You were raised by your great aunt Gertrude. Tell us about her.  How old were you when you first started showing an interest in music, and how did your aunt nurture this talent?
Kirk Franklin (KF): I refer to my aunt Gertrude as the angel that raised me. Sundays after church, we’d go home to a wonderful, delicious Sunday dinner that filled the whole house with the smell of food cooked from her soul. She taught me everything. She taught me how to respect people and respect myself, and that’s something I’ll never forget. As long as I can remember, I’ve loved music, and Gertrude really supported me. Gertrude used to collect cans to sell in order to pay for my piano lessons. She is a huge part of my musical journey.

KTF: Despite your strict religious upbringing, like many teenagers you rebelled and went off the rails. What impact did the lack of a father have on your life, and how did you get back on track and go on to become one of the biggest stars in contemporary gospel music?
KF: My childhood memories are filled with both joy and pain, but no matter what thoughts fill my mind, looking back and smiling or crying is something that is part of the beauty of memories. Growing up without a father leaves an emptiness in you, a yearning for love that you don’t get from your mother. In life, you sometimes try different things to fill that emptiness. I was always a moody child. In the house, it was just me and an older woman, but when I got around my peers, I was just buck wild, because I wanted to be a kid, you know? But for me, it was God’s hand that guided me back to the right path.

KTF: Who are your musical inspirations and why?
KF: I am a true music lover. I have inspirations from every genre.  When I was seven, I was invited to be a special guest at a huge church in town.  I was amazed by the enormity of the church, the size of the choir, and their band. But the main thing I remember about it was this repeated statement from the people over the event’s production: ‘Kid, you’re really good! Someday, you’re going to be the next Andraé Crouch’. That was the first time I’d ever heard that name, but little did I know the name Andraé Crouch was as big as many other names in popular music, and that his influence was felt all of over the globe. As a young musician who got his chops growing up in the Black Church, I was influenced by hip hop and R&B. I was also a huge fan of Thomas Whitfield and U2! Does it get any broader than that? Lol.

KTF: This year you celebrated 19 years of marriage. How has being married and a father of four contributed to your successful career?
KF: Nineteen years ago, I asked the girl that blew my mind the first time I saw her at a swim party when I was eighteen to marry me.  I had no idea of the huge weight of seriousness in that request; no one does at the time.  I love being married to her. Tammy was patient with me. She had a mom and dad in the house. She saw love modelled; I didn’t. She didn’t give up on me. She knew I was crazy, and she was my medication. She calmed me. She made the noise quiet. And she didn’t beat me up for what I wasn’t. Being a husband and a father has kept me sane in my most trying days. My children have truly been a blessing to me. To them, I’m just “Daddy”, so there is no “Kirk Franklin” in the house. I take my kids to school and take out the rubbish, just like everyone else.

KTF: It has been nearly 10 years since you last performed in London. Why such a long absence, and what is next in store for Kirk Franklin?
KF: Honestly, I didn’t know it had been that long! But London is one of my favourite places on earth. I thank you guys for bringing me back, and I pray that it’s not another 10 years before I’m back…  The next thing for Kirk Franklin is in God’s hands. Whatever He wants me to do, I’ll walk it out. 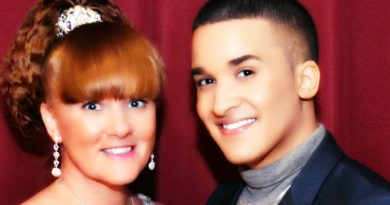