MORE than 3,500 churches in nearly 100 countries, representing up to one million congregants, will sing the classic hymn Facing a Task Unfinished this Sunday (21 Feb) – to draw attention to Christians in troubled countries around the world.

Written in the 1920s and traditionally sung to the tune AURELIA (commonly associated with The Church’s One Foundation), the hymn has been given a new chorus of response by songwriters Keith and Kristyn Getty. Free charts and recordings are being provided by the Gettys to help congregations learn and sing the song.

The new version of Facing a Task Unfinished can be heard at www.gettymusic.com/FacingaTask.

Facing a Task Unfinished was originally written by China Inland Mission (CIM) worker Frank Houghton. CIM issued a call in the 1930s for 200 new missionaries when the number of Christians in the land was estimated at 100,000. Houghton’s hymn galvanised the church. Today, the number of Christians is calculated to be at least 80 million and perhaps as many as 132 million.

‘Songs have the ability to unite and move us as groups,’ said Keith Getty. ‘Frank Houghton understood this. In response to great turmoil in China, he wrote hymns to encourage those witnessing persecution around them. Facing a Task Unfinished provided inspiration to a generation of missionaries. It reminds us that the call of Christ and his Kingdom is our only hope. He is the good news we must sing and bring.’

Added to the traditional lyric by Houghton are the following lines:

Participating churches are being invited to register their involvement and access free music resources to aid their singing.

The Gettys are world-renowned contemporary hymn writers whose songs are sung each year by more than 100 million people. Their most popular hymn, In Christ Alone (co-written by Keith Getty with Stuart Townend), is the #1 most popular hymn sung in the UK since 2006 and was voted the 2nd most-favoured hymn in the UK in a 2013 BBC nationwide poll. The British Hymn Society has nominated In Christ Alone as one of the top five hymns of all time.

Through their concert touring, including the annual Joy–An Irish Christmas, the Gettys have performed before sold-out houses throughout the UK, US and abroad, including notables venues like London’s Royal Albert Hall, New York’s Carnegie Hall, The Kennedy Centre in Washington DC and Nashville’s Grand Ole Opry.

The duo come from Belfast, Northern Ireland and were married in 2004. To date, they have released six full-length albums and two limited edition EPs. They currently reside on the north coast of Northern Ireland and in Nashville, Tennessee, along with their three young daughters. 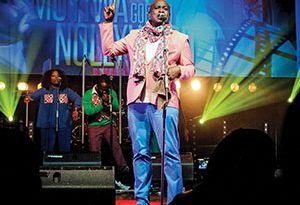