There is always a stirring in the gospel scene when announcements are made that another music awards has been launched. For some, the stirring is one of annoyance, for others – particularly those who are staging the event – it’s of excitement, as they believe they are advancing the cause of gospel music and the artists they are recognising.

In this article, I hope to validate the importance of gospel music awards, and how they help us; that is, those involved in the scene, the wider music industry and, most importantly, our audiences.

AWARDS IN THE WIDER MUSIC INDUSTRY

I am often asked why there are so many gospel music awards in our scene, and have even had some say there should only be one! Although there are concerns regarding the growing number of awards, there certainly could not just be ONE awards ceremony for a whole industry, which has so many facets.

There undoubtedly isn’t one music awards in the mainstream UK music industry, and neither in the US Gospel scene, so why should we think ‘only one’ in our scene? There are awards that focus on a specific music style, reflecting part of a sector; then there are awards put on by a company or organisation, and awards that carry more gravitas or credibility than others – hence the term: ‘a coveted award’. For example, receiving a BRIT Award is probably the highest performance-related award an artist can receive in the UK music industry. The BRITs are entirely funded by the British music industry, and is seen as the equivalent to a USA Grammy, whereas receiving a MOBO (Music Of Black Origin) is prestigious to the Black music scene, and is also widely respected across the international music scene. Currently in the UK, the MOBO Awards and UMAs (Urban Music Awards) are the two leading music ceremonies that retain a category recognising artists from our stream.

We can see how these awards help generate interest for all the recipients and their fans, while turning the wheels of the music industry forward for the record labels, investors and sponsors.

The wider music industry would expect any specialist genre industry to have awards that recognise its own status on the musical landscape.

AWARDS – AS CHRISTIANS, DO WE REALLY NEED THEM?

Genuinely, some Christians think it is pointless and even carnal (worldly) to participate in awards. But, biblically, the evidence shows Christ Jesus’ awareness and acceptance of accolades given by men and God. Scriptural references show that REWARD and recognition of the quality of work is a big, BIG issue. Job 34:11, Matthew 16:27 and Romans 2:6 all speak of God rewarding us with tangible and intangible things. Indeed, Jesus laboured in life and through death to achieve our salvation and is duly receiving his various just rewards. He encouraged His disciples to work and obtain reward. The motivation was not the reward but – let’s be real and honest – in reading biblical texts, it’s certainly part of it.

Also, if we cannot celebrate ourselves, then why should anybody else? I have spoken with many Christian artists, promoters and radio presenters, who so deeply value recognition given.

The argument of ‘quality over quantity’ is the real key to the whole matter: voting systems that have integrity and are run with transparency, and the use of professionals or experts to decide on final nominees and oversee procedures. These are some of the factors. (Let me hear you say ‘Yeah!’)

There is a difference between an industry-based award and a recognition award: industry awards are staged by large representative bodies or large organisations that represent the music in a significant way – often with a national focus. On the other hand, ‘recognition awards’ are invariably by businesses or outfits that either work within or in complementary relationship to the sector in question; they are run according to their own rules and purpose. Awards can become a credible measure of success, subject to the consistency in staging them and the kudos given to them by the Media, guest participants, audience and sponsors.

Gospel awards are a great marker of the advances, changes and vibrant life of gospel music in the UK. Those whom I have spoken to – both artists and patrons – genuinely enjoy the experience, and it just seems the lack of financial backing eludes the longevity of past awards. The biggest positive is that they provided great encouragement, not only to artists but to the many unsung (s)heroes behind the radio mics, mixing desks, promotional concerts, graphic and visual artistry. An award says that someone values your contributions behind the scene. This was and still is the most important factor of staging gospel music awards.

Some of the awards that have taken place since the very first one – the Oasis Awards, staged in 1983 by the Black gospel promotion company, Oasis Promotions – includes: the BGA (Black Gospel Association Awards) – our first industry-related awards; DMI (Deliverance Ministries International) Awards, the first financed by a church and led by a pastor (Charles Buckman); the Midlands Gospel Awards, hosted by veteran radio presenter, Dulcie Dixon; the National Gospel Music Awards, part-sponsored by the BBC Religion & Ethics department; and the GEM (Gospel Entertainment Music) Awards which, in 2003, heralded the idea that gospel music has a right to be included as part of the entertainment industry, because it has influenced and undergirded popular music.

All these awards have enriched and enlivened expectancy, encouraged growth and sweetened labour. It gave the community good reason to dress and celebrate itself.

In more recent times, awards – like the AGMA (African Gospel Music Awards), which have given us the best and richest taste of African gospel music, and has opened our eyes to a whole new aspect that has transformed our scene, PraiseTec Awards, Gospel Xplosion Music Media Awards and the Golden Touch Gospel Awards – are ceremonies that have given pleasure to the recipients.

There is no doubt that other awards will emerge in the very near future that will bring recognition on an industry basis. And we know that more UK acts, personalities and businesses are being recognised by international sources. For example, the compilation album, ‘The British Are Coming‘ (on the Zoe Gospel record label), garnered the first ever set of nominations for artist, rapper JayEss, and a win for Lola Godheld, with her track from the album, ‘Wait On The Lord’ at the prestigious US industry-based (Gospel Music Association) 2012 Dove Awards, while Gospel Music Awards Italy has embraced recognition of artists, including Lurine Cato, Isabella Melodies and Sandra Godley.

Big Church day out event for all 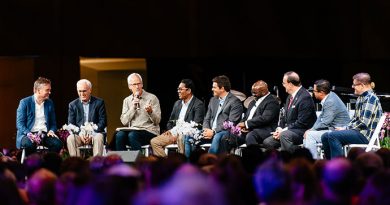