THE Nazareth Trust a UK-based charity operating in the Holy Land has appointed a new Chief Executive to run operations there.

Richard Mayhew has worked for Christian organisations for many years and is already based in Israel – making him an ideal choice for The Nazareth Trust.

The Trust, which has its roots in Scotland through the Edinburgh Medical Missionary Society, operates from a UK base in the North East of England.

It runs a Hospital, a School of Nursing, The Nazareth Village – a visitor attraction offering experience of life in the first century during the time of Jesus – and the SERVE volunteer programme.

The Trust’s UK base is in the North East of England Richard moves from a job as director of the Garden Tomb in Jerusalem and his previous posts include being Vice Principal of the Anglican International School in Jerusalem, running the Christian Mountain Centre in Wales and West Kent YMCA.

Margareta has a MSc in Clinical Psychology and is a qualified counsellor. Richard and Margareta will be relocating to the Nazareth area.

Morgan Jamieson, Trust Chairman, said: “We are a long-established charity running a complex and growing organisation in an area faced with many challenges and uncertainties.

“In addition to our educational and volunteer programmes our hospital, and its outreach work in the West Bank, bring vital treatment to thousands of people, some of whom would otherwise have no access to medical care.

Richard said: ‘It is such an honour and privilege to be invited to lead the Trust at such an important and exciting time in the organisation’s history.

“The work that it does brings such benefit to the community of Nazareth and beyond, and I am so looking forward to joining a team of such dedicated and talented staff and volunteers.”

It has the largest and busiest Accident and Emergency facility in the area which functions 24 hours per day – seeing in the region of 50,000 people a year.

The Nazareth Trust is currently running a £2m appeal to raise money to upgrade the paediatric unit at the hospital – which is the only access to health care for many children in the region.

The Hospital also conducts vital outreach work in the West Bank through mobile clinics for those unable to travel to the hospital. 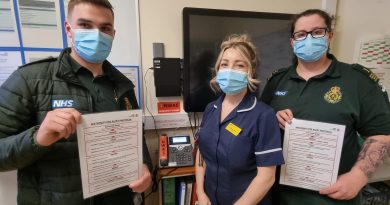