In the last issue, we featured three women who were making a difference in our community. These women were well received by our readers, and many have sent positive messages of adulation, encouraging us to continue focusing on more women in our community – women who are not often mentioned in mainstream media, yet they are making a big difference around the world with the work they do.

In this issue, we focus on two women, who are raising the bar. I am a believer of action and pursuing dreams of renewal, freedom, justice for women and young girls. I believe in a holistic approach to living in freedom and eradicating poverty in all its forms. Education in all aspects encourages and empowers. By sharing the profiles of women who are working at making a difference, we share hope for another to try, the spark that ignites a dream. We all talk about change, that word which equates a vision of what can be! Vision has a power to focus and ignite the human spirit.

Her Excellency Madame Justina Mutale has been globally acclaimed as one of the most influential and inspirational African women. In 2012, she was awarded the prestigious title of ‘African Woman of the Year’. Ms Mutale is Founder and President of the Justina Mutale Foundation for (women’s) Leadership. Named as one of Africa’s most respected names, well-known faces and influential voices, Ms Mutale is a Distinguished Member of the Royal Biographical Institute and the Global Institute for Human Excellence. She is the Global Ambassador for Gender Equality and Spokesperson of the International Women’s Think Tank.

Ms Mutale serves on the Advisory Board of the World Leaders Forum, and is a civil society delegate to the United Nations Commission on the Status of Women and the United Nations High Level Dialogue on Migration and Development. A recipient of numerous international awards, honours and accolades, Ms Mutale has been honoured as a Global Official of Dignity in the GOD Awards held at the United Nations Headquarters in New York.

She has received the WAF-mdg Award from the Women Advancement Forum, presented in recognition of her efforts towards the actualisation of the United Nations Millennium Development Goals. Ms Mutale is featured on the Black Women in Europe Power List and in the Black 100+ Hall of Fame – an exhibition and legacy of the top 100 Black achievers in modern Britain. She serves as President, Patron, Ambassador, Trustee and Advisory Board Member of several humanitarian, community and charitable organisations in the UK and overseas. Prior to founding her own organisation, Ms Mutale worked in the Gender Section of the Commonwealth Secretariat, which deals with advancing gender equality, women’s empowerment and gender mainstreaming in Commonwealth countries.

In addition, Ms Mutale is part of the Bond Network, which represents the largest household names in the UK international development sector who influence key decision-makers at national, European and global levels, and serves on Bond’s European Policy Working Group on Gender. She is also a member of the African Union Diaspora Coalition and a civil society delegate to the African Gender Ministers’ Meeting, held in the wings of the African Union Heads of State Summit.

“I was brought up in an environment that emphasises the Golden Rule: ‘Do unto others what you would want them to do unto you’ by going beyond self-actualisation and personal development to benefit others. God is my greatest Mentor. God shows us that we live in a world of abundance and should, therefore, share and care for others,” said Justina.

Funke is a senior leader for the world’s largest biotech company. She is a practising solicitor, leading the legal and corporate compliance, company secretarial and data protection functions that support the company’s pharmaceutical operations in the UK, Ireland, Malta and Gibraltar. A multi award-winning solicitor, Funke is currently the most senior Black lawyer working within the UK pharmaceutical industry, and is one of the most senior globally. In addition, she is a multi award-winning diversity campaigner and has received both national and European recognition for her diversity work.

She speaks regularly at conferences in the UK and abroad, with extensive reach and impact in doing so. She has impacted thousands of lives across all ages, races, genders and social backgrounds. Passionate about the next generation, she addresses and advises state school students as a speaker for Speakers4Schools (www.speakers4schools.org), and spoke to over 1,000 school children during 2015 alone. As a Professional Ambassador for Aspiring Solicitors (www.aspiringsolicitors.co.uk) – an organisation founded to break down entry-level barriers to the legal profession – she supports university students by providing guidance, work experience and mentoring, as well as speaking at universities and at graduate recruitment events.

She created a summer placement scheme within her team at work, offering future law students valuable work experience within a global, blue-chip organisation. Now in its fifth year, the scheme has changed the career trajectories of over 20 students. She also created an annual internship role within her team, specifically aimed at bright, A-level students taking a gap year before university. This paid internship not only gives students the opportunity to gain work experience before furthering their studies, but also encourages them to save valuable funds to assist with their tuition fees and other expenses.

Other speaking engagements include speaking at the 30% Club, The Law Society, the BBC and in Parliament. In addition, she has participated in several ‘roundtable’ events held by The Law Society Gazette.

She is a champion for both the Women in Law London network, supporting the pipeline of women lawyers (www.womeninlawlondon.com) and the First 100 Years Project, a groundbreaking initiative that will create a digital library to celebrate 100 years of women lawyers in the UK. The library will be archived at the British Library in 2019 (www.first100years.org.uk). In addition, she is a Steering Committee member of DRIVE (Diversity Recruitment Institute of Value and Excellence), a diversity in recruitment initiative founded by Green Park Interim & Executive Search with the aim of effecting an extra 10,000 diverse hires per annum. The initiative is chaired by Baroness Royall, a former leader at the House of Lords (www.green-park.co.uk/drive-diversity-recruitment).

‘My faith in God is everything to me, and has seen me come through so many tough situations in life victorious’

In 2015, she founded the Women Leaders in Life Sciences Law network, the only network of its kind, supporting the international pipeline of female legal talent within the life sciences sector. She also personally sponsored a 2015 report called ‘Opening up or shutting out’, focusing specifically on social mobility issues across the legal profession (see copy of report at www.byfieldconsultancy.com/wp-content/uploads/Opening-up-or-shutting-out_Social-mobility-in-the-legal-profession.pdf). The report was successfully launched with an exclusive in The Times, followed by several articles written by Funke (for example, for The Times, Managing Partner magazine and New Law Journal). Funke is now working with the Government’s Social Mobility and Child Poverty Commission to make impactful changes across the UK with the many social mobility challenges posed by the elite professions, including law.

Funke is an expert mentor and sponsor. As a proud working mother to a 13-year-old son, Funke is also a single mother, with principle day-to-day responsibility for her son. She juggles the demands of career and home, advising working mothers on how to achieve life balance. She is passionate about the law, diversity, education and the healthcare sector. A regular media commentator, she is also a keen fundraiser for various charities, including Cancer Research UK. She has twice served as a school governor and as a board director.

She was recently appointed as a Fellow of the Royal Society of Arts, to recognise the impact of her diversity work within the UK’s legal profession and British society.

“My faith in God is everything to me, and has seen me come through so many tough situations in life victorious. When things have looked impossible and hopeless, my faith has sustained me and given me the hope I need to continue. I pray several times a day – for favour, grace, wisdom and guidance. God has never let me down, and I know that He never will.” 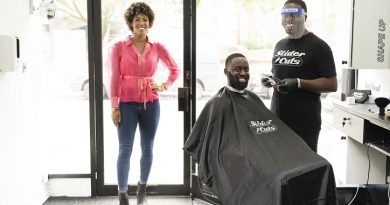 Building community through the Church by Dionne Gravesande