Talking about God, the Bible and religious experience

It was a surreal moment. The telephone call that came through that Sunday afternoon in September 1993 was from a familiar voice. In fact, it was from my friend and former boss at the Commonwealth Institute (CI): Godfrey Brandt. He was appointed as the first Black Deputy Director-General appointed at the CI in the spring of 1998. I joined him in the autumn of that year, as the youngest senior executive responsible for regional development and Commonwealth education. As DDG, my boss moved in the sort of circles that included heads of Commonwealth governments, diplomats, cultural attachés and senior UK government officials at the Foreign & Commonwealth Office. On many occasions I would accompany him and get to meet some very impressive people.

But this Sunday afternoon, the telephone call from Godfrey was one of those spectacular moments you don’t forget. The sort of moment you dream about telling your children and grandchildren. Without much fanfare, my friend popped the question: “How would you like to spend an evening with Muhammad Ali?”

My first reaction was: “Yeah, pull the other one.”

After a silent pause, Godfrey asked the question again. This time, I said something like: “That’s fantastic, I’d love to attend.” Thinking that it was an evening event somewhere in central London, I asked about the time and venue. To my surprise and utter amazement, Godfrey gave me the address of the Park Lane Hotel and the time we were expected to be there. He then added (almost as an afterthought) that we would be meeting in Muhammad Ali’s apartment, and that there were only going to be ‘a few people’ there.

When I shouted to my wife, Pauline, that we were going to spend a private evening with Muhammad Ali, she too was beside herself with excitement. Having struggled to decide what to wear for this special occasion, we made our way by public transport to meet the Champ at his hotel on Park Lane.

Godfrey and his wife, Pauline, had already arrived at the hotel, and the four of us were greeted by Howard Bingham (Ali’s photographer and long-time friend) and led to the great man’s apartment. To say that I was nervous, excited and felt the proverbial butterflies in my stomach would be an understatement. But, as we waited for Champ to arrive, I could only guess what the other five people were thinking, and how amazing it was that we were going to have a private audience – a private evening all to ourselves — with the legendary Muhammad Ali.

It was now about three hours since we had received the phone call; and here we were, awaiting the appearance of the man who called himself ‘The Greatest’, and the world echoed his claim.

Walking slowly, with dignity, purpose and poise, Muhammad Ali entered the large room with a suitcase. The surreal was about to begin again. After greeting us, the Champ took a seat in the middle of the room. He opened the suitcase in a stylised way, slowly and deliberately, and started to distribute Bibles to us. He was still the consummate showman. How strange. I had finally met my hero and of all the things he wanted us to do that evening, he chose for us to have a Bible study and talk about God. Actually, it wasn’t just about theological table-talk. Muhammad Ali had a clear agenda and lots of handwritten notes to make his points; he wanted to show us all the contradictory and difficult passages in the Gospels and the Bible. He went through his notes, and methodically asked us all to turn to select passages in the Bible, after which he would comment on them.

We did this for about one hour. Unfortunately for the Champ, I was able to answer most of his objections to Christianity and to many of the so-called contradictions in the Bible. I guess it wasn’t a fair contest: I was a former Religious Studies teacher and doing a doctorate at King’s College, London, in Theology. I was used to this type of contest and discourse about the Christian faith and ‘biblical hermeneutics’ (biblical interpretation).

As the evening wore on, and our host felt he was losing this theological battle, he conceded and jokingly raised his fists, offering to continue the contest in the medium in which he was the King.

That’s how I remembered my evening with the Champ. But what were the impressions of my wife and friends of that most memorable of evenings?

Here is Pauline’s (my wife, not Godfrey’s) recollections:

“I recall it as one of the most memorable evenings in my life. It was a bit like a dream – sat in a hotel room with the Champ himself, doing magic tricks and holding court. The most bizarre moment was when he presented a suitcase of Bibles, which he had obviously travelled with, handed them out to the six of us, and started debating textural contradictions. When it became obvious that he was losing the argument, he resorted to his obvious skillset, and started play-fighting with my husband. I protested strongly to him not to hit David, as he was to become a father again! He was witty, charming, smart, a natural entertainer with a keen interest and insight into theological matters. It’s an evening that I’ll never forget, and I feel very privileged that I was able to spend an evening with the Champ.”

Looking back on that evening, Godfrey said:

“We were thrilled out of our lives when we spent an evening with Ali.  His magic tricks were mostly transparent; his enthusiasm for the Bible study he conducted was great, but the greatest thing of all was his gentle and genteel humility. This was, at best, surprising for someone who had made his name saying how amazing he was.  One is forced to remember Ali in one interview saying to the reporter, with his tongue firmly in his cheek: ‘It’s hard to be humble when you’re as great as I am’.”

Pauline Brandt sums it up for all of us in the following words:

“We took a collective deep breath as he entered the room. We were in the presence of greatness! A greatness mixed with gentleness, charm and curiosity. We were challenged to talk religion – but also had fun. I’m still trying to figure out how he ‘levitated’.  I feel blessed to have met this ‘once-in-a- lifetime man’ who touched the hearts of people everywhere.”

Well, that was my evening—our evening— with Muhammad Ali, the Champ, the Greatest. My parents loved and admired him. And, as a teenager, he was my hero, along with my elder brother, Roy, who left the UK to start a new life in the US, and Chris Cameron, the gifted musician, who one year in the assembly at Ernest Bevin School (South London) made all Black boys sense what it was like to be ‘young, gifted and Black’, as he played Simon & Garfunkel’s Bridge Over Troubled Water on the grand piano.

Because of Muhammad, I even dabbled in boxing at the Boys’ Brigade at Tooting Congregational Church, until I got floored by a boy called John Mariner and decided to become a teacher instead!

Born in 1942, the grandson of a former slave, Muhammad Ali lived in a troubled age of injustice and discrimination against Black people in America. He rose to fame at the height of the Civil Rights Movement, and was the icon of Black pride internationally. Of course, he was the greatest boxer of all time, but he was also a freedom fighter. Yes, he had an ambivalent and ambiguous relationship with both Malcolm X and the Nation of Islam, but he stood his ground in the face of enormous opposition, especially when he refused the US Army draft. “Why should they ask me,” argued Ali, “to put on a uniform and go 10,000 miles from home, and drop bombs and bullets on brown people, while so-called Negro people in Louisville are treated like dogs?” For many, his rhetoric – and logic – carried a degree of political inexorability and moral ponderosity that defined African-American experience.

And how do we assess a life such as his? For me, it’s always about where people stand in times of crisis and trouble. And Dr Martin Luther King articulates it best when he said:

Muhammad Ali was more than a fighter; he was an ambassador and icon of hope and courage. He was a hero to me and millions of others around the world. I’m grateful that I got to spend an evening with him talking about God, the Bible and the power of religious experience.

The Champ once said: “At home I am a nice guy, but I don’t want the world to know. Humble people, I’ve found, don’t get very far.”

We talked way into the late hours that night with Muhammad Ali. Maybe that Sunday night in September, as Godfrey later recalled, Muhammad Ali felt ‘at home’ with us.

Rest in peace, our Champ. And may light perpetual shine upon you. 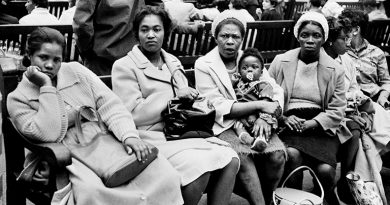 The birth of the Gospel message? by Dionne Gravesande