Hats off to Madame Sarah Téibo! Since entering the UK Gospel scene in October 2015, this r&b/gospel singer has hit the ground running, and continues to gather momentum.

We were first introduced to Sarah via her upbeat and catchy debut single, ‘Steal My Joy’, last autumn. The track release also came with a fun video directed by Uvi Orogun, which has amassed close to 13k YouTube views so far. The single received UK-wide and international radio airplay, and achieved a No 2 position on the December A Step FWD Charts. Not bad at all for a debut single.

Sarah Téibo successfully made her voice heard as an artist of note; this was further reinforced by her receiving Best Newcomer Award nominations at the GXMMAs and Premier Gospel Awards this spring.

In summer 2016, Sarah dropped her debut album, ‘Walk With Me’. The album is a blend of Sarah’s favourite genres, including up-tempo afrobeats and mid-tempo neo-soul, mixed in with r&b and gospel for good measure. The album also includes a handful of collaborations with well established and respected UK Gospel artists, including Lurine Cato and Triple O, amongst others. True to the form that Sarah has shown from the start of this journey, she released the album as part of a special headline show she performed for Sunday Gospel Brunch at the iconic 606 Jazz Club in London.

Following the May album release, at the end of June Sarah dropped a lyric video for ‘New Day’ – the second single off ‘Walk With Me’. The single is a mid-tempo feel-good track with a neo-soul vibe. In an interview with the Juicy Ladies, Sarah said: “I hope ‘New Day’ will become a theme song for morning shows.” Additionally, Sarah recently co-headlined a concert with none other than US Christian r&b/soul singer, Lisa McClendon.

In a very short space of time, Sarah Téibo has firmly established herself as a serious artist and, as we take this walk with her, we look forward to seeing where she goes next. 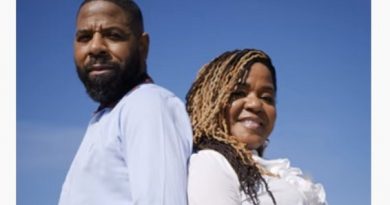