Few other doctrines go to the heart of the Christian faith as the Atonement through the Blood of Jesus Christ.  We use the terminology “I plead the blood of Jesus” when praying over someone who is sick, in order to release them from the bondage of sickness. On Sundays, congregations sing at the top of their voices: “There is power mighty in the blood”.   The blood of Jesus Christ has given eternal life to those of us who believe and, without it, would still be separated from God. As a Christian who operates in the scientific space, I have also seen how blood transfusion saves and improves patients’ lives. Blood transfusion is one of the miracles of modern medicine.

We all expect blood to be there for us when we need it. In England, there are 870,000 active blood donors (people who have donated within the last year); however, the statistics show that 2.3% of donors who donated in England are from the Black, Asian and Minority Ethnic (BAME) community, despite the fact that this community represents around 14% of the population. Furthermore, the statistics show that less than 6,000 Africans and African Caribbeans donated last year (see Table 1). We see a similar picture in Africa and the Caribbean islands: the inability to mobilise citizens towards embracing the blood donation culture. This usually results in unnecessary deaths among our people.

Over the years, Blood for Life (NGO) have worked with various groups within the African and Caribbean community to raise awareness of blood donation, and has carried out recruitment drives. We have also supported blood transfusion in Africa/the Caribbean through the donation of medical equipment and training. Recently, we donated a blood mobile unit to the National Blood Transfusion Service, Jamaica, through a number of diaspora groups and with the support of the former Jamaican High Commissioner. This blood mobile unit was used to launch the ‘One Love, One Blood, Saves Lives’ campaign in Jamaica. The vehicle gift has been the catalyst for an innovative partnership between NHS Blood and Transplant, Blood for Life and RAFFA, which aims to recruit 2,800 active Black Caribbean blood donors by 2020, using the same ‘One Love, One Blood, Saves Lives’ banner.

So, why the interest in the African and Caribbean community? Apart from the fact that we are under-represented as a community in the donor pool, there are some facts that need to be considered:

Unfortunately, the same challenge is seen in whole organ and stem cell (bone marrow) donation, where people from BAME and mixed parentage backgrounds are likely to wait, on average, twice as long for some transplants as their White counterparts, because of the difficulties they face in trying to find an appropriately matched donor. (Organ/tissue match is likely to be closer when the ethnicity of the donor and recipient are the same.)

It is estimated that the BAME population will reach 20% of the total UK population by 2050 and, while the 21st century has ushered in a remarkable diversity in the UK, this is not reflected in the blood donor pool.

The question: ‘What would Jesus do?’ is something we hear during our sermons. I have no doubt that if Jesus were living in the world today, He would roll up His sleeve to give blood to save the life of another. After all, Jesus said in John 15:12-13, “My command is this: Love each other as I have loved you.  Greater love has no one than this, that he lay down his life for his friends.” The donation of blood, in my opinion, is the donation of one’s ‘life’, for the Bible declares that life is in the blood (Leviticus 17:11). In fact, it would be correct to say that Jesus has already donated His blood for us on the cross, and He expects us to do the same:   “Most assuredly, I say to you, he who believes in Me, the works that I do he will do also; and greater works than these he will do, because I go to My Father” (John 14:12). There is a power and anointing in your blood that could save a life – both physically and spiritually.

Each time you donate blood, it is split into component parts that can be received by up to three adults or seven babies. There is no doubt that one blood donation goes a long way to saving the lives of so many – just as Jesus’ did for us. The ironic thing is that every time you donate blood, approximately 10% is removed (the body replenishes what has been removed). As a child of God, you are simply ‘tithing’ part of yourself so that another can live and fulfil purpose.

To know more about blood, visit www.blood.co.uk or call the NHSBT Donor Line on 0300 123 23 23 (available 24 hours a day, seven days a week, with all calls charged at the standard local rate, even from mobile phones).

Dr Dapo Odumeru obtained his PhD in Pharmacology from University College Dublin, Ireland, in 1995 and has many years of experience in the field of Blood Transfusion and the pharmaceutical industry. He is also the Founder of Blood for Life UK – an award-winning non-government organisation. He has worked on various projects in partnership with institutions, government agencies and non-government organisations in Europe, Japan, Africa and the Caribbean, and has published his research work in International Scientific Journals. He was recently made a Member of the Order of the British Empire (MBE) for services for promoting blood and organ donation in the Black, Asian and Minority Ethnic communities (BAME).

Let’s Make The World A Safer Place For Women 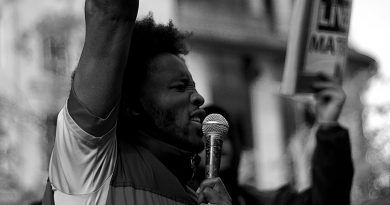 Race on the agenda by Richard Reddie