Relationship goals! That’s been the buzzword of 2016, but who’s setting these unrealistic bars of perfection that not even those on the perfectly framed Instagram pics can achieve with any level of consistency? As we kick-start 2017, I wanted to share just four simple, realistic and very practical relationship goals that should hopefully alleviate some of the damaging pressures we often put upon our relationships and marriages.

Is it important to establish a greater purpose for your union? This may seem like a silly question to even ask, but think about it. Beyond some of our innate human desires – like having sex and attaining a sense of belonging – what greater purpose does our union with our spouse fulfil? Who else benefits from our relationships? Sometimes we look at our relationships from an insular perspective. Rather than thinking about what we can get out of the relationship, perhaps our goal should be to reflect on who else can become beneficiaries of our union. How does your relationship impact your partner and your greater circle of influence? There is a greater purpose in giving, so consider what your marriage will provide for your children and even your community.

I travelled to Paris for the weekend and, being British, I just expected my English to be widely accepted wherever I went. However, to my surprise, many of the locals refused to engage in a conversation with me unless I at least tried to speak their language. “Why would they be so difficult?” I found this a bit rude. However, after some thought I discovered that, in fact, I was the one being rude. I had made no effort to connect with them using a language they were well versed in. Men and woman are no different. We communicate and feel love in different ways. I read a book called ‘The 5 Love Languages’ by Gary Chapman, and learned that we can express and receive love in many different ways (love languages) and, because of this fact, it’s important to never assume your spouse speaks the same language of love that you do. Learning a love language is not a million miles away from learning to speak French: you start with a few basic words/actions to get by, but then you have to push the limits by trying to converse. Sometimes we’ll get a few words wrong and look a bit of a fool, but at least you’re one step closer to your goal of becoming more fluent in a language that is foreign to you. I’m rubbish with foreign languages, however my goal is to remain committed to becoming a bilingual communicator of love. For now… je parle un peu.

Research has shown that men and women with close friends or siblings who are divorced are more likely to experience a break-up in their own marriages, than if they had happily married friends. This would seem to make common sense. If you hang out with people who are nonchalant about cheating on their partners, you will eventually become desensitised to this issue, and find nothing wrong or maybe even sympathise. You become the company you keep. On the other hand, when your social circle mainly consists of long-term, happily married couples, it then helps to provide a more positive view of marriage and can even help positively influence your own union. I never had too many friends before, but now I find that most of the friends I do have are happily married. This is very intentional, as I find them to be a great source of inspiration. It’s also great to know you have genuine friends that are in your corner, against a world doing everything in its power to separate us from our vows. Whether you’re married or not, this year, make it your personal goal to surround yourself with happily married couples who care about the institute of marriage.

GOAL #4 Read and Pray Together

When you do things together you start to share common traits. Take fast food, for example. If you and your spouse eat junk food every day, then you will both eventually grow overweight together. Whatever you do together will eventually sync your desires, so when you read and pray together you become not only more in sync with God, but also with one another, too. When my wife and I spend time in the morning reading and praying together, I’ve found it has a positive effect that permeates throughout the day. When it becomes a goal to pursue the kind of relationship that God intended for us, not only do we begin to mature spiritually and, in many cases, intellectually, but we also begin to encourage one another in the Word and in prayer. This is one of the most selfless acts we can do for our spouse: to demonstrate our love.

Staying in love is becoming increasingly difficult for most – especially in a world where unrealistic relationship goals bombard our timelines and where comparisons continually cripple marriages. We can change that! If you’re married, well… you have enrolled as an ambassador of marriage, so let’s start to re-establish some #RealRelationshipGoals that provide a holistic perspective on marriage and a sense of realism that flies in the face of the current status quo. 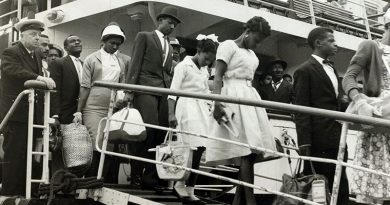 The Feast of Tabernacles (ICEJ) is set to attract over 5,000 Christian pilgrims to Jerusalem between the 16th to 21stOctober

Breaking the cycle of youth crime

One thought on “Real relationship goals by Eugene Jordan”