CeCe Winans, the bestselling and most-awarded female gospel artist of all time, has long since cemented her status as one of the most accomplished and celebrated women in modern music history. It would be easy to look back and rest on such illustrious laurels, but CeCe has always had her eyes fixed firmly on the future. So it should come as no surprise that, after careful consideration, she jumped at the opportunity when her son, Alvin Love III, proposed she record the generation-bridging new album, ‘Let Them Fall In Love’. Her first in nearly a decade, the record finds CeCe returning to the studio with gusto, working for roughly three years to craft her most confident and adventurous collection yet.

‘Let Them Fall In Love’, recorded both in Nashville and New York City, finds CeCe merging eras and genres in a glorious blend of past and present that simultaneously recalls the heyday of Motown, and still sounds undeniably modern. Big band horns meet strings from the Nashville String Machine, as CeCe’s soaring voice hits new heights, fuelled in part by the encouragement and motivation of her son.

Her first solo album in nine years leaves one to wonder: where has CeCe been? The simple answer is “In church.” God called CeCe and her husband to start their Nashville Life Church during the early part of 2012… and that was enough to keep her occupied and away from the studio. “So, for almost five years, I’ve been totally focused on that,” she told Billboard Magazine. “It was a really big undertaking, and I really couldn’t focus on the music. I’m one of those people who has to focus. Finally, once we got things going with the church and got a rhythm happening there, I could create some space and think: ‘What do I want to do next?’”

CeCe says it’s about having balance in life and listening to God’s calling. “Prioritising my life and putting God first are key, and making sure I’m faithful in my daily devotion. After that, intentional sacrifice plays a major role. Having a balanced life doesn’t just happen; we must do our part and allow the Holy Spirit to do His part. I couldn’t balance it all without the help of the Holy Spirit.”

The results of the collaboration with CeCe and Alvin III were simply remarkable. CeCe can inhabit each song on the record so fully, because she has lived those stories. She describes the album opener, ‘He’s Never Failed Me Yet’, as her personal testimony; ‘Run To Him’ as her frequent act of refuge, and ‘Marvelous’ as a musical embodiment of the Black Church. On the song, ‘Hey, Devil!’, CeCe is joined by The Clark Sisters. The track, ‘Peace From God’, is a prayer for light in an increasingly dark world, and ‘Lowly’ is a lesson about pride and humility, aimed at the young men who may need it most. CeCe’s eclectic ability shines through on the country waltz of ‘Why Me?’ – a song she discovered when she was invited to perform live with its writer, Kris Kristofferson. “I’ve never been a traditional gospel artist,” says CeCe. “Some of the things are probably more traditional than I’ve done before, but I think we put something together that will not only embrace my old listeners but will bring in some new ones. I really think this record will be able to do what I’ve done in the past, and more.”

Hezekiah Walker and his choir join CeCe on ‘Dancing in the Spirit’ for a jubilant celebration, while ‘Never Have To Be Alone’, the first single release, finds her taking a far more sombre approach, singing to the younger members of her congregation. ‘Let Them Fall In Love’ was the first song recorded for the album. CeCe emphatically stated, “That was the first song for this album,z and I knew right away that I wanted the record to be named ‘Let Them Fall In Love’. I told my son that it had to be the heartbeat of the album. There are a lot of different styles and a lot of strong messages on there, but all of them are to bring us to this point. It’s why I came back and recorded another album, to express my heart and my desire that people young and old can listen and fall in love with the higher power; fall in love with love, and fall in love with faith and joy and peace.”

CeCe has always had a special affinity for the people of London… She asked this writer to pass on this message to women of faith in London, “Women of faith, I want to remind you how powerful we are.  We are the answer to a lot of the problems we’re facing; we have the grace to get through every trial. Remember who lives on the inside of us… Believe for the impossible. We have the victory!” In 2005, she recorded most of her self-titled 2005 album, ‘CeCe’, the second release through her own label, Puresprings Gospel, at London’s famed Abbey Road Studios with the aid of the London Session Orchestra. She has appeared in London scores of times: at Wembley, the Dominion Centre and other venues.

CeCe Winans has released many albums that crossed genres and boundaries, whilst influencing a generation of gospel and secular vocalists. Her mantel today holds a staggering 10 GRAMMY Awards, 20 Dove Awards and seven Stellar Awards. She’s been inducted into the Gospel Music Hall of Fame, the Hollywood Walk of Fame and the Nashville Music City Walk of Fame, in addition to being named a Trailblazer of Soul by BMI, and garnering multiple NAACP Image Awards, Soul Train Awards, Essence Awards and more. She has sold more than five million albums in the US alone, topping the gospel charts repeatedly, while managing to cross over with smashes like ‘Count On Me’, her stunning duet with Whitney Houston from the multi-platinum ‘Waiting To Exhale’ soundtrack, which sold two million copies and cracked the Top 10 on the pop, r&b and adult contemporary charts. She touched millions more with inspirational performances everywhere, from Oprah to the White House.

In response to a question from a UEL (University of East London) Music student, CeCe offered this prophetic advice for anyone blessed with God’s gift of singing the Gospel: “First, I want to encourage you to keep loving Christ and making Him your priority. If singing the Gospel is your passion and God’s will for your life, then go for it! Keep practising, so when the opportunity comes, you will be able to walk through that door.” 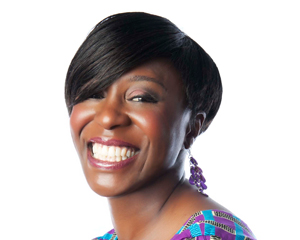