Whether, like me, you were watching the television at 1.00am on the morning of Tuesday 14 June 2017, or you woke up to hear the news of the Grenfell Tower catastrophe, I personally do not believe that any of us will ever be able to forget the shock and disbelief we experienced at the sight of the 24-floor tower block of flats, being engulfed by flames.

These and numerous other sounds and images – of people banging at the windows, in their attempts to attract attention to their plight; hearing their audible pleas for help; witnessing the sight of a mother desperately trying to save her child’s life by throwing the child out of a tenth floor window in the hope that someone would catch and save her precious baby, while she remained trapped in the rapidly burning building – will have been indelibly etched on the minds of the many people who saw and heard the events unfold. These images will have forever altered the landscape of their memories.

The fact that such a devastating fire could have occurred in – and I quote one of the comments made by a newspaper reviewer on the television following the fire – “the fifth richest nation in the world, in the wealthiest borough, in one of the wealthiest areas”, should not have been possible. We are mystified as to how a fire, said to have started on the fourth floor, could have reached the twenty-fourth floor in the space of 30 to 45 minutes, in a modern tower block in a first world country. As I watched the fire take hold on that fateful night, I was aghast at the speed with which the building was consumed. It gave little to no chance at all to those on the higher floors that they would make it out alive.

In the aftermath of the fire, and the realisation of the scale of the human tragedy which has occurred, it is perhaps the echoes of that newspaper reviewer’s comments regarding what wealth should assure us of – alongside what we believe modernity should afford us – coupled with the seeming ineptitude of the local and national governments’ handling of or lack of credible response to the real and immediate needs of the relatives and survivors of those who have died or are yet unaccounted for which has fuelled our disbelief and the subsequent anger which has erupted from those requiring answers to what to them are simple questions.

The echoes of that newspaper reviewer’s comments – that wealth and modernity should have afforded those residents protection and safety – have fuelled our disbelief and the subsequent anger erupting from those requiring answers to what, to them (and us), are simple questions. These unanswered questions have highlighted the seeming ineptitude of the local and national governments’ handling of – and lack of credible response to – the real and immediate needs of the survivors and the relatives of those who have died or are still unaccounted for. Such is the realisation of the scale of the human tragedy, which has occurred in the aftermath of the fire.

Of course, what this disaster has shown us is that there are no simple answers to what are now complex issues. One of the outcomes I believe we need to come to terms with is this: As wealthy and as modern as we may be in the UK, these factors do not preclude us from disaster. On the contrary, they may inadvertently contribute to us experiencing the very disasters we think could never happen here. Why is this? you might ask. Simply because over-reliance on anything leads us to complacency.

Complacency leads us to placing unquestionable trust in elected officials and highly paid people to carry out the necessary checks and balances on our behalf to ensure our safety. As such, maybe we no longer take sufficient responsibility for asking pertinent questions or for holding to account those whom we employ as public servants to carry out a job on our behalf, ie. that of safeguarding our communal wellbeing. Instead, maybe we take it too much for granted that these people have our best interests at heart. As information emerges from the aftermath of the Grenfell Tower fire, certainly in this instance it appears that our trust has been misplaced.

I believe another factor we need to take note of is this: Disaster never discriminates between rich or poor, young or old, Black or White, refugee or non-refugee when it strikes. Neither does it ask whether it is the opportune time to strike. It is no respecter of wealth, poverty, time or location. Disaster is simply an opportunistic assailant; it takes hold wherever it finds the right conditions to aid and abet its cause.

On this occasion, I believe several factors came together to ignite the most serious fire that Britain has reportedly seen since the Second World War.

I have no doubt that there are other factors, but these seem pertinent to me in providing the opportunity for this disaster to occur. The result is that the homes, which should have been a haven, became a towering inferno of destruction.

Life is, at best, a privilege, at worse fragile, and therefore not to be taken lightly or for granted.

In the wake of this tragedy, there are naturally calls for justice, and for those perceived to be responsible to be brought to book. These are not matters that can be dealt with in the heat or emotion of the moment, however. Patience is what is required in times like these; we must be realistic in our expectations.

If we want the truth to be unearthed, we must realise that it is likely to take months – if not years – to unearth the myriad of factors, which may have contributed to triggering such a disastrous fire. This is not the time for recriminations, neither is it the time for justifications. I believe it is, however, the time to take as many precautions as humanly possible, to ensure that the risks of any future occurrences are minimised.

I believe this is the time to think about how we can begin to help people recover from their devastating loss; how we can build on the strengths of the love and care which have been poured out in West London by people – from all walks of life and from all parts of the city and country as a whole, and how we can heal the great divides that have developed in our communities and in our neighbourhoods. How can we further support the efforts being made to provide help to the relatives and survivors of Grenfell Tower? How can we be a conduit of healing, rather than an instigator of bitterness and strife?

In times of great tragedy, there is an even greater need for great love. I believe that is what we have seen surfacing in the outpouring of support which was immediately forthcoming from people who just wanted to reach out and help in whatever way they could. The coming together of people – irrespective of race, colour or creed – epitomised the saying that we have more in common than that which divides us. The Apostle Paul tells us in 1 Corinthians 13: ‘Love keeps no record of wrongs. It does not delight in evil, but rejoices with the truth.’ I believe a fitting legacy for those who have lost their lives in this disaster would be if we were all to seek to exemplify this.

Among the many things, which have been written on a wall in the area, where people have recorded their condolences, is this: ‘Pray for our Community’, and most certainly I believe that this, in addition to the conscious application of love, is one of the most important things we can do to help in the aftermath of Grenfell Tower.

Pastor Vashti Ledford-Jobson is an anointed preacher, teacher, intercessor and deliverance minister. Ordained to the ministry in August 2003 she has served in numerous areas of the New Testament Assembly (NTA) locally and nationally. A gifted motivational speaker, Pastor Vashti has not only ministered in the UK, but also in Antigua, Canada, Ghana, India, Israel, Jamaica, South Africa and the USA. She brings with her an apostolic anointing as well as a wealth of experience, enthusiasm and a deep love and zeal for the things of God. She is the Pastor of NTA South Croydon, and is married to Linval. Together, they have raised their three beautiful daughters (the youngest of whom is now deceased), and are now blessed with the glorious legacy of six gorgeous grandchildren. 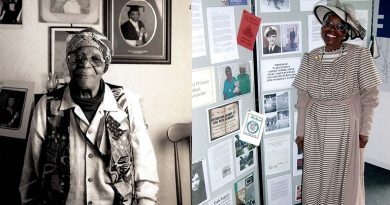 Supporting Each Other Through The Challenges