He’s been called the most influential man in the last one thousand years.

He was certainly the most famous man in Europe. He literally changed the course of history, and we’re still living with the impact of his actions today. In fact, even if you don’t know a lot about him now, that’s all about to change.

October 2017 marks the 500th anniversary of the Protestant Reformation, and there are celebrations going on all over the world to honour Martin Luther, the man at the centre of it all.

He had a message so revolutionary, so anti-establishment, so challenging that it immediately went viral, which was pretty remarkable for the 16th century without social media. But there was a new technology in town that was just starting to get established, which helped his ideas to spread rapidly. We take it for granted today but, back then, ‘printing’ was just becoming affordable enough to become a means of mass communication. If he were alive today, Luther would be all over Facebook, Instagram and YouTube. And his messages would be retweeted on Twitter to millions of followers.

You might think this is an old, historical and irrelevant message, but you would be mistaken. Luther has affected your life whether you’re a Catholic or Protestant or atheist. If you lived in Luther’s time, you had no choice, you were automatically part of the Roman Catholic Church, and its rules were enforced by the State, the Holy Roman Empire. Luther’s reformation not only led to a choice of how to worship God, it eventually led to the choice to not worship Him at all.

There’s a popular quote by Tommy Lasorda that tells us: “There are three kinds of people in this world: people who make things happen, people who watch what happens, and people who wonder what happened.” Martin Luther is one of the people who made things happen. Though he was no highly toned athletic specimen, were he alive today, Nike would undoubtedly recruit him as the face of their ‘Just do it’ campaign. The famous Nike tagline captures a spirit of grit, determination and passion, and Martin Luther was the living embodiment of that same spirit of resolve and purpose. He just did what needed to be done, regardless of the cost. He was no saint, and had plenty of faults that are well documented.

We’re probably all familiar with the Edmund Burke quote: “The only thing necessary for the triumph of evil is for good men to do nothing.” Luther was not a ‘do nothing’ guy. In the slowly unfolding revelation that we are ‘saved by grace alone’, Luther found his life’s purpose, and he would not keep silent regardless of the cost to himself.

It’s a timely reminder in this digital age, that Christianity can’t be limited to a virtual, vocal or visual experience. It must be lived and experienced in the real world. The ‘Word became flesh’ is not just a picture of Jesus’ incarnation; it’s also a reminder that we have to “be the change we want to see in the world”.

Our mission hasn’t changed; it’s still to take the Gospel to the world. We know the need, we know the theory, and we have the message. Now, are you ready to be like Martin and ‘Just do it’?

October 1517, Germany. The world is about to change but doesn’t know it. ‘Protesters change the world’ and, in a singular moment, a minor monk starts a revolution that will alter history and usher in the modern world.

Brought to life by a 15-piece company of actors and musicians, including Vadé, the sensational jazz-gospel quintet, currently appearing in Sky TV’s new music show, ‘Sing It’.

The production challenges the audience around the theme of ‘protest’, as it effectively blends the iconic story of Luther with a contemporary twist. The show is an opportunity to be inspired by Luther’s stand and what it means for us today, while still being thoroughly entertained. 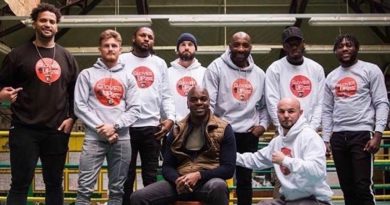