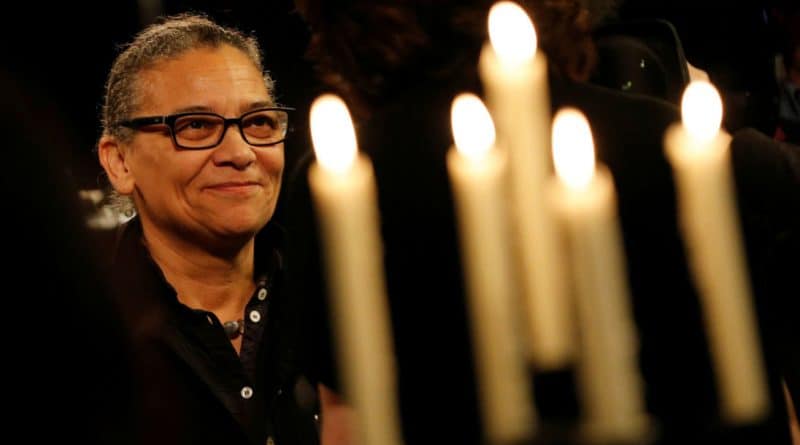 Lubaina Himid was named the 2017 Turner Prize winner. She was presented with contemporary art’s biggest prize by musician Goldie, at a ceremony in Hull Minister near Ferens Art Gallery where her work is on show alongside the other three shortlisted artists.

Her win was hugely significant for a number of reasons – but who is the latest artist to add “Turner Prize winner” to her CV?

The representation of women and ethnic minorities on the Turner Prize’s shortlists has admittedly improved over the years, but 2017 is the first year that a black woman has won the coveted prize – that’s a 33 year wait. This wait is precisely what motivates Himid in the production of much of her work, which addresses racial representation (or misrepresentation, or the lack of it) in the media and the arts. She was born in Tanzania, but is now based in Preston, where she divides her time between making artwork and teaching as Professor of Contemporary Art at the University of Central Lancashire.

She’s also the oldest person to win the Turner Prize

The Turner Prize announced a significant rule change this year. For the first time since 1991, artists over the age of 50 can be considered for the shortlist. Three of the four artists included this year are over the former age limit – Himid, Hurvin Anderson and Andrea Büttner – and the fourth – Rosalind Nashashibi – is 43 years old. At 63 years old, Himid is the oldest Turner Prize winner to date, beating Malcolm Morley and Howard Hodgkin (the first two winners) by a margin of ten years.

​Himid’s works primarily as a painter, but don’t expect all of her work to be pinned to the wall. Many of her works take the form of “cut-outs” – life-size freestanding figures which are frequently gathered en masse. They look a little like stage flats, lending her work theatrical allusions.

She also looks to the relationship between photography and painting, both in terms of composition and in her employment of collage in her painting work. The material, however, is only a very small part of the story Himid wants to tell. “I am not a painter in the strictest sense,” Himid herself has said. “I am a political strategist who uses a visual language to encourage conversation, argument, change.”

Himid’s work is proudly political. She’s an activist, directing confronting both historical and contemporary racism in her artwork. Satire is her true material of choice, and visual satirists throughout history have helped informed her work.

One of the works in the Turner Prize 2017 exhibition, entitled A Fashionable Marriage, draws directly from a painting by 18th century satirist William Hogarth entitled Marriage A-la-Mode. Hogarth would use black characters in his scenes with questionable motives. Himid writes that Hogarth “used black people to highlight the evils and misdeeds of almost everyone he saw; they were signifiers of European hypocrisy and the sordid falseness of white folk.” In her version of the work, Himid uses Hogarth’s composition to address the immoralities of British society in the 1980s.

Other works also see her figures appear on ceramics, and in her 2014 work, Naming The Money, Himid presents cut outs of black servant figures from historical paintings. She displays them singularly, giving them individuality and identity, addressing the lacking visibility of the African diaspora in Europe, the figures that have gone unseen and unheard in mainstream media for hundreds of years. Himid’s tackling of the past makes for a pertinent comparison with the present – she provokes us to see how much has changed and how much hasn’t.

She’s an advocate for boosting the representation of black artists

In the 1980s, Lubaina Himid came to prominence as a leading figure in the Black Arts Movement, curating numerous exhibitions aimed at promoting the work of underrepresented black artists. These have included Five Black Women at the Africa Centre in 1983 and The Thin Black Line at the ICA in 1985, which was revived at the Tate Modern in 2011. In 2015, Himid curated Carte De Visite at the Hollybush Gardens Gallery, bringing together the work of three black female artists as part of the a project entitles Making Histories Visible.

Something else has changed with the Turner Prize this year. Not only has the age limit been lifted, but the way the winner is chosen is different too. Previously, the judges made their decision based solely on the shows that the artists were shortlisted for, but now they also take into account their presentation in the Turner Prize exhibition itself.

The exhibition consists of four spaces, each curated by a shortlisted artist. This year, the artists are permitted to include artwork created at any time throughout their careers. Himid is showing works from the two solo exhibitions (Lubaina Himid: Invisible Strategies at Modern Art Oxford and Navigation Charts at Spike Island in Bristol) and group exhibition (The Place Is Here at Nottingham Contemporary) that earned her a place on the Turner shortlist, but she’s also showing earlier works, one of which dates back to 1987.

She already has another major gong

Himid was given an MBE in 2010 for her services to Black Women’s Art. After last night, it seems Himid’s impressive list of accolades can only grow. 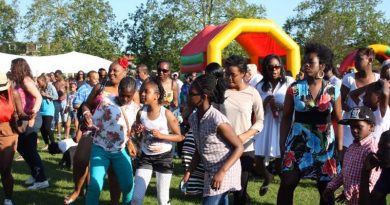 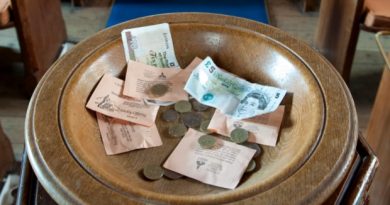 Churches contribute an estimated £1billion per year to support communities