As Americans grapple with the rise of white nationalism and divisive political rhetoric, Rev. Dr. Raphael G. Warnock, senior pastor of Ebenezer Baptist Church in Atlanta, continues the tradition and legacy work of freedom and justice. Known as the “Freedom Church,” Ebenezer Baptist Church was founded in 1886, where its most famous leader, the Rev. Dr. Martin Luther King, Jr. served and co-pastored alongside his father, Martin Luther King, Sr., from 1960-1968, who was also the third pastor of the church.

Nearly 50 years after Dr. King’s death, his commitment to freedom and advocacy for civil rights are well-documented throughout history. As chair of the New Georgia Project, Warnock works to help get community members registered to vote and have their voices heard. As the nation reflects on the life Dr. King and “MLK 50,” we spoke with Rev. Warnock, the fifth pastor of the historic church, about Dr. King and the “dream,” and a resurgence of hate that remains the central focus of what some call a new Civil Rights era.

[This interview has been edited and condensed for clarity.]

REV. RAPHAEL G. WARNOCK: Ebenezer Baptist Church has always focused on the relationship between faith and freedom fighting. What not enough people know is that even as Dr. King stood bearing witness to freedom, he stood on the shoulders of Ebenezer leaders who preceded him. Dr. King’s father, Martin Luther King, Sr., led a campaign for voting rights in Atlanta in 1935, some 30 years before the voting rights law was passed.

Dr. King is part of a long legacy of freedom fighters at Ebenezer. Rev. King, Sr. fought for the equalization of teacher salaries in the segregated school system. He encouraged his members to buy property and sat on the board of a bank. He was committed to both civil rights and political and economic empowerment.

Dr. King’s maternal grandfather, A.D. Williams, the second pastor of Ebenezer, was also a freedom fighter and one of the founders of the NAACP in the City of Atlanta.

WHAT DO YOU ATTRIBUTE TO THE RESURGENCE IN HATE 50 YEARS AFTER THE DEATH OF DR. KING?

Racism is America’s original sin and one of its most intractable social evils. The truth is, hate is always there because of the history of our country, because of fear, because some people have a stake in othering people who come from a different place or background.

In times of economic challenges and often when it looks like black people are making progress, the history of our nation, which is detailed quite well in a recent book by an Emory University professor [Dr. Carol Anderson] titled “White Rage,” in which she shows that in each juncture when black people have tried to make gains in education, economic strength, and in the case of [former President] Barack Obama, the ultimate prize, the White House itself, there is this fierce backlash that has occurred historically. We’ve seen this movie before; it’s just tragic to see it in the 21st century.

“…Hate is always there because of the history of our country, because of fear, because some people have a stake in othering people who come from a different place or background.”

“…Hate is always there because of the history of our country, because of fear, because some people have a stake in othering people who come from a different place or background.”

Barack Obama is a product of the black church. Here is a man who sat in the black church and soaked in the promise and the spirit of the preaching and the ministry and the worship that he heard Sunday after Sunday. I know that may be controversial for many because the most Americans have heard of Jeremiah Wright is a 30-second sound bite that was played over and over again to the point of ad nauseam during the election year 2008. But the truth is, Barack Obama was a part of Trinity United Church of Christ, one of the most politically active churches in our country.

In some ways, Barack Obama’s presidency cannot be understood apart from the promise and the spirit and the hope of the black church. Perhaps in ways that were shocking to most Americans who had sat in a black church on a Sunday morning. The black church has always been the conscience of the American nation. Barack Obama brilliantly brought the spirit of that to the presidency.

THERE WERE SEVERAL PERIODS IN AMERICAN HISTORY THAT HATE HAS BEEN FRONT AND CENTER. DESCRIBE THAT PERIOD DURING RECONSTRUCTION?

After the Civil War, and the end of slavery, people had a stake in depicting black men as dangerous, as a direct threat to white womanhood, as capable of raping every white woman around the corner. That did work regarding the maintenance of Jim Crow laws and their brutal impact on black men, black women and black bodies and black communities. This hate has shown up in different ways, and they’ve all done work, regarding the maintenance of a racist society.

We’ve seen this hate before. We saw it during the Civil Rights Movement, and we saw the backlash, which occurred during Dr. King’s lifetime. Many Americans thought that Dr. King did more damage to race relations than help. They thought he was more unhelpful than helpful.

Prophets are seldom celebrated during their lifetime. Dr. King has become a larger-than-life figure that in the rearview mirror, everybody embraces Dr. King, even if they distort what he represented. You can’t be a part of polite society and be against Dr. King. You can’t be a virulent, fire-breathing racist, and be a part of polite society. Dr. King and his movement is responsible for making racism, in the ways that we’ve seen and in the past, socially unacceptable.

“The black church has always been the conscience of the American nation. Barack Obama brilliantly brought the spirit of that to the presidency.”

“The black church has always been the conscience of the American nation. Barack Obama brilliantly brought the spirit of that to the presidency.”

But now there’s a resurgence of this ugliness and brutal and unapologetic race, which is a new moment for us, and one that ought to concern all freedom-loving Americans. The tragic fact is black people are accustomed to respectable racism. We’re used to navigating the workplace bigotry and the glass ceiling.

But what we saw show up in Charlottesville and other places is always there, but we haven’t seen it go mainstream. This time, it has a president who has turned the political dog whistle that’s been a part of American politics for a long time into a scream. It is unabashed racism represented by the alt-right that is a characteristic of this moment that we’re living through, and we have to pay attention. We can’t ignore it; we have to resist it, and we have to condemn it.

WHAT CAN COMMUNITIES DO TO COMBAT HATE? WHAT IS YOUR CHURCH DOING?

We’re out here trying to help people every day. We have a non-profit called the Martin Luther King, Sr. Community Resources Collaborative that’s engaged in empowering people. Not long ago, we had an expungement seminar at my church where we expunged over one thousand criminal arrest records so that people would no longer have to check the box and say, ‘Yes, I’ve been arrested,’ and therefore not be able to get a job or even apply for an apartment.

Our church is increasingly multiracial, which we think is vital as we try to bear witness to what Dr. King called the beloved community. The truth is, all of us have to stand up. We can’t just stand up when hate shows up in the most obvious ways. The racism after an Obama presidency, in some ways, is experiencing a resurgence.

WHAT DO YOU THINK DR. KING WOULD SAY ABOUT THE HATE ISSUE TODAY?

I think Dr. King approached these issues with a tough mind and a tender heart. As a pastor, he was concerned about the heart of the people. He focused on the laws and the public policy. He said, in essence, ‘I can’t make you love me, but I can if I got the right law on the book. Perhaps I can stop you from lynching me. Maybe I can make sure I have a right to vote.’ 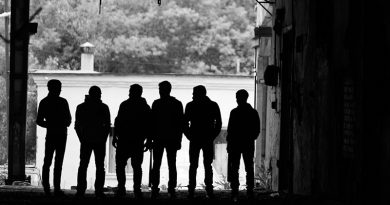 No bars on hope by Dr Ian Joseph

One dream can change the world: SELMA… coming soon by Shirley McGreal