Racism and religious intolerance has become more acceptable in Britain in the wake of the Brexit referendum, a United Nationsexpert has warned.

At the end of an 11-day visit investigating the impact of Brexit on racial equality in the UK, the UN special rapporteur on racism reported a “notable shift” in attitudes.

“A Brexit-related trend that threatens racial equality in the UK has been the growth in the acceptability of explicit racial, ethnic and religious intolerance,” said E Tendayi Achiume.

Stakeholders raised serious concerns about the failure of political leaders on the left and the right to consistently and unequivocally condemn antisemitism and Islamophobia perpetrated in the media, in public spaces and even by members of the UK parliament.”Ms Achiume said that although far-right parties had not enjoyed the political success seen elsewhere in Europe, extreme views were gaining ground in mainstream political parties on both the right and left.

She highlighted the documented rise in hate crime reported to police following the referendum in June 2016, with incidents increasing almost a third year-on-year to more than 80,000 – the vast majority racially motivated.

Monitoring groups have reported significant rises in both Islamphobic and antisemitic attacks.

“The discourses on racial equality before, during and after the referendum, as well as the policies and practices upon which the Brexit debate has conferred legitimacy, raise serious issue,” Ms Achiume said, warning of a “growth in volume and acceptability of xenophobic discourses on migration, and on foreign nationals including refugees in social and print media”.

She gave no specific examples but the UN High Commissioner for Human Rights raised alarm over reporting of immigration issues in Britain in 2015, singling out a Sun column by Katie Hopkinsthat compared refugees to “cockroaches” and likening it to pre-genocide discourse in Rwanda.

The rapporteur called on the government to prepare immigration policies ahead of Brexit that protect both EU and non-EU migrants from the threat of racial and ethnic discrimination.

The special rapporteur’s final report, to be presented to the UN Human Rights Council in June next year, will contain more detailed findings on the impact of Brexit on racial equality in the UK.

Her wide-ranging interim statement included a range of recommendations, concluding that laws enacted under the coalition and Conservative governments that “deputise immigration enforcement to private citizens and civil servants in a range of arenas” must be repealed.

Speaking in London, she cited austerity, immigration laws and counter-terrorism policies among the structural dynamics undermining racial equality in Britain.

She heavily criticised the Right to Rent programme, which requires landlords to conduct visa inspections, bank checks and NHS data transfers that were partly scrapped earlier this week.

The policies had “effectively transformed places like hospitals, banks, and private residences into border checkpoints”, she said.

In the wake of a scandal over the treatment of workers who were invited to Britain during the Windrush period and their children, the government has apologised for “appalling” cases and vowed not to deport anyone wrongfully.

Sajid Javid, who became home secretary following Amber Rudd’s resignation, has distanced himself from the “hostile environment” and said only illegal migrants will be targeted.

The government had already rebranded Theresa May’s flagship policy as the “compliant” environment, but Ms Achiume said nothing would change as long as parts of the 2014 and 2016 Immigration Acts that underpin it remain in place.

“Efforts such as eliminating deportation targets can achieve only slight cosmetic changes to an immigration enforcement regime that has permeated almost all aspects of social life in the UK,” she added.

“The structural socioeconomic exclusion of racial and ethnic minority communities in the United Kingdom is striking,” Ms Achiume added.

“The harsh reality is that race, ethnicity, religion, gender, disability status and related categories all continue to determine the life chances and wellbeing of people in Britain in ways that are unacceptable and in many cases unlawful. Austerity measures have been disproportionately detrimental to racial and ethnic minority communities … making women of colour the worst affected.”

She called on the government to subject all proposed fiscal policies to equality impact assessments that could flag any racial imbalances before they are brought in.

Weeks after a UN panel raised serious concern over the deaths of a “disproportionate number” of black and minority ethnic people in police custody, Ms Achiume hit out at inequality in the criminal justice system.

She also said a “national panic” over terrorism was driving Islamophobia and called for the government’s Prevent counter-extremism programme to be suspended and reviewed.

Ms Achiume concluded that although the UK had shown leadership in some areas of racial equality, including the prime minister’s race disparity audit, the government still has “much to do”.

“I hope that this is only the first step towards transforming formal government commitments into reality, especially for those who experience the highest levels of exclusion, subordination and discrimination on the basis of their race or ethnicity,” she said.

A government spokesperson said: “We note that the Special Rapporteur commended UK legislation and policy to tackle direct and indirect racial discrimination, and that in her end of mission statement she welcomed the Race Disparity Audit as ‘a remarkable step towards transforming formal commitments to racial equality into reality’.

”We have made great progress, but the Prime Minister is clear that if there is no rational explanation for ethnic disparities, then we – as a society – must take action to change them. That is precisely what we will do.” 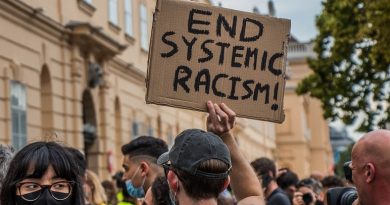