Todd Dulaney’s ‘Your Great Name’ is a declaration of pursuit and passion that speaks to the reverence, love and power that comes from the Name of Jesus.

The common thread of ‘Your Great Name’ is to invigorate listeners to worship, make bold confessions of their faith, and incorporate musical elements that reflect an array of cultures. ‘Your Great Name’, the lead single and title track, is already being incorporated into worship services across around the world.

Todd has once again penned a strong and declarative anthem that is resonating in the hearts of believers everywhere. “This song drives home the message that Jesus is the answer,” says Todd. ‘Your Great Name’ is obviously spotlighting the greatest Name, the Name that holds all power. The Name, the only Name by which we may be saved. And so, the mindset when we were writing the song is that I want to create an atmosphere where the believer is ready for combat. Because we are facing in the world right now the most critical time we have ever faced before, and everybody is on edge. It is tense. Racial tension, everything is tense, but I wanted to respond with not only the Great Name, but also with an anthem to let the devil know we are not here to play around.”

On the heels of a groundbreaking launch of his music career with the breakthrough album, ‘A Worshipper’s Heart’, ‘Your Great Name’ has proved to be a game-changing album for Todd. His emphasis on vertical worship, along with his drive to strengthen believers’ personal relationship with God, have proven to be exactly what the genre needed. “I wanted to create an experience that showcased a bigger sound, encouraged corporate worship that would cross cultures,” says Todd. “I believe we achieved that with this body of work.”

In a recent interview with Grammy Award winner, Erica Campbell, on her syndicated USA Radio show, Get up! Mornings with Erica Campbell, Todd said it best: “Vertical worship is just not as much as talking about what God does for me, but I’m just talking about who He is.  You get a different response from God when you start showering Him with “You’re great”, “You’re wonderful”,, “You’re awesome”.  Not so much “God, you did it for me. I thank God for my house, I thank God for my….” which is good because you are grateful for all the things He has done for you.”  Todd continues: “I found out that it is one thing to sing about what God has done for you, sometimes it will rip a church apart, the reason being that everyone can relate and so a lot of time people don’t really want vertical worship, because they love to think about themselves. Vertical worship is selfless, because you are talking about only Him.”

‘Stand Forever’ is another standout from the album. Todd derived inspiration for the song from a beloved passage of Scripture: ‘Heaven and Earth shall pass away, but My words will never pass away.’ With a message that God’s Word stands forever, it encourages listeners to be bold, to be resolute in their belief, and to be committed to carrying this message to others. Triumphantly, the song declares, ‘We won’t stop calling Your name. We won’t quit seeking Your face. We want You!’

Shana Wilson-Williams, an incredibly talented and rising worship vocalist, is featured on ‘King of Glory’. Todd aims to create moments that bring listeners closer into their experience with God. ‘King of Glory’ is a song written to do just that. Its energy drives home the message of being free in God’s presence to worship – a core element of Todd Dulaney’s ministry.

“The backdrop and the back story of ‘King of Glory’ is we had a song I wanted Shana Wilson Williams to feature on, and the song just didn’t feel good to either of us. We were waiting to kind of see if I was going to record this song, but I just wasn’t sold on it. Two days before the recording, I called Shana and I said: ‘Hey I am going to call you back in a little bit.  I am going to go sit down to see if God will give me something else, because this song is just not sitting.’”

Todd continues; “About five minutes later, as I’m sitting on the piano, I started singing ‘King of Glory, fill this place, just want to be with you, just want to be with you.’ I called Shana back and told her I was about to send her a voice note. I texted her and she’s like: ‘Todd, what did you just do in the last five minutes?  This is it!’ And everywhere we have been going, singing this song, it has been what has taken over our nights, everywhere we go to worship.”

Todd Dulaney is poised to take this great body of work to a thirsty public. His desire is to foster freedom in worship by creating atmospheres that inhabit God’s presence. Dulaney is resolute in his commitment and call to provide quality music that embraces multiculturalism and unity. Todd is emphatic in saying: “My hope is that I will be successful at pointing people to Jesus, no matter what. That is what I want my legacy to be.”

‘Your Great Name’ is available in London through Psalms Distribution 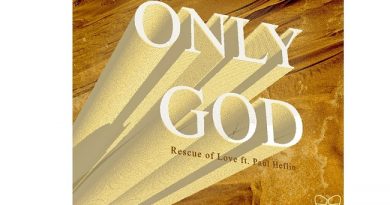 Rescue of Love returns with the beautiful song, “Only God”

The Global Impact Of ‘What’s New In Gospel Vol 1’

An audience with Owen Deacon by Alan Springer