Dr Neville George Lawrence, OBE, is best  known as the proud father of murdered  teenager, Stephen Lawrence. His and Baroness Lawrence’s tireless campaigning for their son’s killers to be brought to justice eventually resulted in two of Stephen’s killers being convicted of his murder -18 years after the crime, through a change in the double jeopardy laws, which the couple helped bring about.

Crucially, the 1997 Macpherson judicial inquiry into the police investigation into Stephen’s death led to an overhaul of Britain’s race relations legislation, which created the strongest anti-discrimination powers in Western Europe – all thanks to more than five years of campaigning by Neville and Doreen Lawrence after their son’s death.

The rest is history.

Although still working behind the scenes, Dr Lawrence has been mostly content to stay out of the limelight, but he came under the media spotlight again last month, when the BBC commemorated the 25th anniversary of the murder with the broadcast of the documentary, Stephen: The Murder that Changed a Nation.

Dr Lawrence, along with Baroness Lawrence, family, friends, neighbours, the police and other key players, such as the CPS, lawyers and campaigners, featured in the gripping three-hour-long programme, which was broadcast in three episodes.

Keep The Faith was keen to obtain Dr Lawrence’s perspective on the documentary, and also to find out about his personal faith journey leading up to his astonishing announcement last year that he had forgiven his son’s killers.

The turning point came after he decided to forgive. When he did so, he said “a load came off my shoulder.”

Speaking exclusively to Keep The Faith, Dr Lawrence said: “When somebody does something to you, you have bad feelings about them. You wish that something bad would happen to them. It was like a heavy load that I was carrying.”

However, two years ago, he met a family who had lost their son, and whose killer subsequently wanted to ask the family to forgive him. Dr Lawrence said: “What they said about forgiving was that, if you let down the load that you are carrying, it’s easier to live your life. So I did the research on forgiveness. I thought you had to have the person’s permission to forgive them, but then, when I did the research, I found out you didn’t have to ask their permission. Whether they want you to forgive them or not doesn’t matter.”

Having been brought up in a strong Christian family, Dr Lawrence wanted to join the church when he returned to Jamaica, and started attending regularly. He said: “I decided that I was going to get baptised on January 13th (2017). The significance of the 13th was that Stephen was born on September 13th, and I was born on March 13th, so starting a new life I thought I would get baptised on the 13th, and I tell you, a load came off my shoulder.”

He was baptised into the Seventh-Day Adventist faith of his youth. Asked what

forgiveness meant to him, he said he no  longer even remembers the names of his son’s killers, and does not think about them: “You don’t dwell on the fact that these guys are still walking around because, as you know, some of them are still walking around; and you don’t have bad thoughts about somebody killing them, or a car running them over or anything like that.

“So that is released from you, and you just leave everything in the Almighty’s hand. Whatever happens to them from now on has got nothing to do with me.”

Today Dr Lawrence, 76, remarkably looks ten years younger than he did when he stood outside the Old Bailey in 2012, after two of his son’s killers, Gary Dobson, now 42, and David Norris, 41, were sentenced to life imprisonment.

18-year-old Stephen, who aspired to be an architect, was fatally stabbed at a bus stop in southeast London in a horrific, unprovoked attack by a gang of White youths.

The three parts of the BBC documentary examined in depth the police investigations, interventions from Nelson Mandela and the Daily Mail, revelations of institutional racism in the police, suspicions of corruption, and the effects that the killing has had on the justice system since then.

Dr Lawrence said: “It was draining, because it went back to 1993 and before. It brought back some bad memories about some of the things that happened on the way to getting some justice.

“And I’m saying to people at the same time that I didn’t even think I’d be alive today because of the trauma of losing my firstborn. Sometimes I wish it were me that was killed, because I was 51 at the time; my son was only 18. He had his whole life in front of him.

“Also, the fact that he decided that he wanted to be an architect – something that I wanted to be – and I was hoping that he would achieve that. All those things, when it comes back to you, you kind of regret the fact that somebody murdered your child for no other reason than the colour of his skin.”

At a memorial service in central London, on 23rd April 2018 marking the 25th anniversary of his death, PM Theresa May announced that 22nd April would become a national memorial day for Stephen Lawrence. She said: “For the past 25 years, Doreen and Neville have fought heroically to ensure that their son’s life and death will never be forgotten. Their dignity, their courage and their sheer determination are an inspiration to us all.”

The memorial service was “good and bad” for Dr Lawrence: “Whatsoever we do, you can appreciate what we’re trying to do but, at the same time, we’d rather have our son here with

us, if it were possible. All kinds of things about this: what he would be like, or if he would have kids… you think about all those kind of things. But, at the same time, we are glad in a way that his name is being used for good things, and it’s helping other people as well.”

He said he has no problem with Duwayne Brooks, Stephen’s friend who was with him the night they were set upon, and has met him more than once, including when Mr Brooks was running for Mayor in Lewisham: “We met up, and he told me what he was trying to do, and I wrote to support him. I came here (to the UK) in March. I only knew last week that he was going to re-run for Mayor, but I haven’t been able to speak to him since then, but if there is anything I can do to help him, I’ll do it.”

In the documentary, Dr Lawrence said that the first time he heard from Mr Brooks was when the young man gave evidence at the committal hearing for the private prosecution the family had brought against the suspects in August 1995. Speaking on the programme, Dr Lawrence said: “All the while, I was hearing rumours thinking that he had run away and left Stephen. He didn’t.”

Along with thousands of other West Indians, Dr Lawrence, who is Jamaican of Jewish, Maroon and African origin, came to the UK in the 1950s aged 18, and worked initially as a tailor before becoming a builder and decorator. He met his future wife, Doreen (now Baroness Lawrence), and the couple married in 1972. They lived in Woolwich, southeast London, and had three children.

Sadly, the intolerable pain of Stephen’s murder tore the couple apart and, in 2004, Baroness Lawrence revealed they had divorced in 1999 after 27 years of marriage. She said in the documentary she felt he was angry with her, as he had wanted the marriage to look fine from the outside.

For her part, Baroness Lawrence told the programme that after Stephen’s death she “had to keep it together for everybody”, and expected support from her then husband. She stated: “It was as if the tragedy only happened to him, and the rest of us weren’t going through anything.”

Responding to this in the documentary, Dr Lawrence says: “It was like I was in a different country or different space. I was totally consumed with grief.

“It got to the stage where I couldn’t even stand to walk up and down in the place, and I was told by my doctor to take a spell away. I’ve been through three hard years of pain and suffering. I don’t think I can take anymore.”

He said being back in Jamaica had helped a lot: “I don’t concentrate on the tragedy a lot, as much as when I’m here. At one stage, I couldn’t walk down the road where it happened. There were so many reminders about the racist murder of Stephen. I can picture Stephen lying on that ground there. It’s painful. I wasn’t there to help him.”

Now residing back in the UK, Dr Lawrence will focus on his work as head of the Metropolitan Police Violent Crime Prevention Board, launching in June 2018. He said: “We have a group of people from all walks of life involved in that. We are doing research into knife crime now, andwill use feedback from some of the research to set up a policy to stem the tide of knife crime that’s happening at the moment.”

Along with other victims, he also handed in a letter to the Home Secretary (then Amber Rudd) last month, criticising the current inquiry into undercover policing, which he and his family and others had been subjected to. He said: “We won’t get to the bottom of what happened to all these other families they (the police) spied on over the years, if we allow this to keep going on. We are hoping the Home Secretary will take notice of what we’re saying, and try and resolve it for us.”

Meanwhile, he continues to speak to organisations, universities, schools and faith establishments about life after Stephen’s death; the lack of transparency within an organisation, and the legal processes. He also gives presentations, and sits on panels on double jeopardy – one of the changes he and Baroness Lawrence influenced.

He presents on the positive relationships that he has established, and encourages positive community engagement with the police service, as well as addressing the importance of challenging unacceptable behaviour in organisations through successful campaigning; the  power and importance of community interrelationships, and positive engagement with statutory and non-statutory organisations.

Dr Lawrence has been awarded honorary doctorates in law by four universities where he delivers annual lectures, including Portsmouth University, City University, University of East Anglia and the University of Bradford. He received the Human Rights Award in 1998 and, along with Baroness Lawrence, the Order of the British Empire (OBE) in 2003. 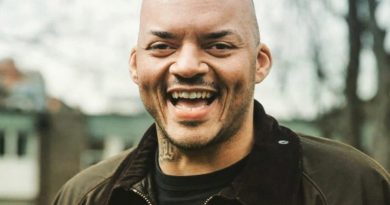 Claud Jackson: My Journey from Drug Dealing to Deliverance