Melbourne’s Herald Sun, owned by News Corp, first published the caricature of Williams with exaggerated lips and a butch physique on Monday, triggering outrage around the world.

Mark Knight, who drew the picture, was forced to deny his image was racist and shut down his Twitter account amid the growing clamour.

Despite the outrage, the paper reprinted the cartoon alongside unflattering caricatures of US President Donald Trump and North Korean leader Kim Jong Un, attempting to portray the controversy as an effort to curtail free speech.

“If the self-appointed censors of Mark Knight get their way on his Serena Williams cartoon, our new politically correct life will be very dull indeed,” the paper wrote in an editorial on its front page. 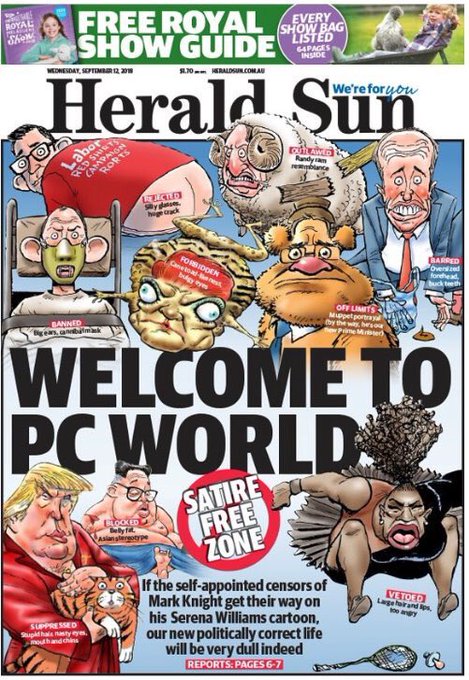 Critics said the sketch drew on historical racist caricatures of African Americans, but in an interview with CBS News on Tuesday Mr Knight said:  “When I drew that cartoon, I wasn’t thinking of racial politics in America. I simply saw the world number one player having a dummy spit.”

Mr Knight closed down his social media accounts on Tuesday after facing withering criticism from more than 20,000 online commentators over the image.

British author JK Rowling added her voice to the chorus, tweeting: “Well done on reducing one of the greatest sportswomen alive to racist and sexist tropes and turning a second great sportswoman into a faceless prop.”

Williams was given three code violations, earning her a point penalty and then a game penalty which gave Osaka a 5-3 second-set lead that effectively gifted her the title.

The penalties stirred a debate in the tennis world over double standards toward men and women in the sport.

In Mr Knight’s cartoon, Williams can be seen jumping up and down with a broken racquet next to a baby’s dummy as the umpire asks Osaka “can’t you just let her win?”.

Mr Knight, who has a reputation for controversial cartoons, was pilloried from far and wide for his portrayal – including by a number of US media outlets.

In a searing piece, The Washington Post’s cartoonist Michael Cavna said the “racist” sketch was reminiscent of the “vile imagery” popularised during the era of racial segregation in the US.

Others pointed out that Osaka, who is mixed race, was portrayed as a petite and feminine white woman with jet blonde straight hair. In fact, Osaka has dark curly hair and is taller than Williams.

America’s National Association of Black Journalists called the cartoon “repugnant on many levels”.

“[It] not only exudes racist, sexist caricatures of both women, but Williams’ depiction is unnecessarily sambo-like,” the organisation said in a statement.

The Story of Little Black Sambo was a 19th Century children’s book which featured derogatory racial depictions such as characters with thick red lips.

The cartoonist initially responded to the criticism by stating he had “no knowledge of those cartoons or that period”, saying on Tuesday that “the world has just gone crazy”.

He pointed out that he had drawn an unflattering portrayal of Australian male tennis star Nick Kyrgios “behaving badly”.

“Don’t bring gender into it when it’s all about behaviour,” he said, but by noon on Tuesday he had closed down both his Facebook and Twitter accounts.

Mr Knight was also accused of racism last month for a cartoon on train station safety which showed faceless black figures fighting in a Melbourne subway.

273,000 now displaced due to flooding in Somalia as more extreme weather looms