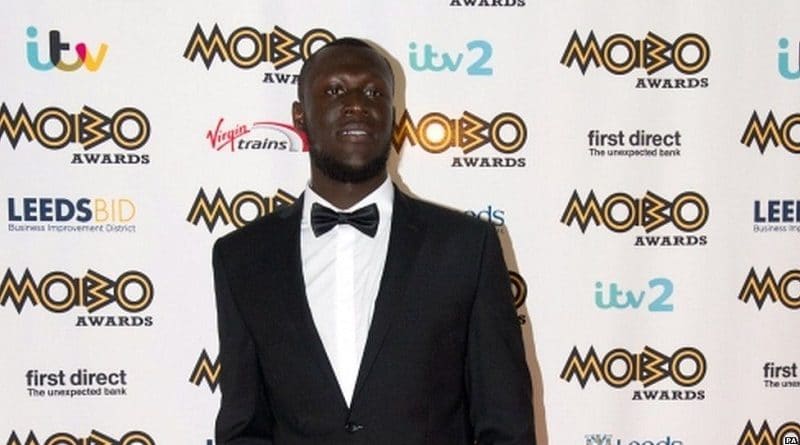 This year’s Mobo awards have been put on hold, as organisers make plans to revamp the ceremony for 2019.

The ceremony, which has been running since 1996, champions “the best in British urban music and culture”, acting as a corrective to the pop and rock-focused Brits.

Founder Kanya King said taking a gap year would allow the Mobos to return with a “bigger, revamped show” in 2019.

“We understand the Mobos will be missed this year but we will return next year, bigger and bolder,”

She said, in a statement posted on the Mobos’ official Twitter feed. 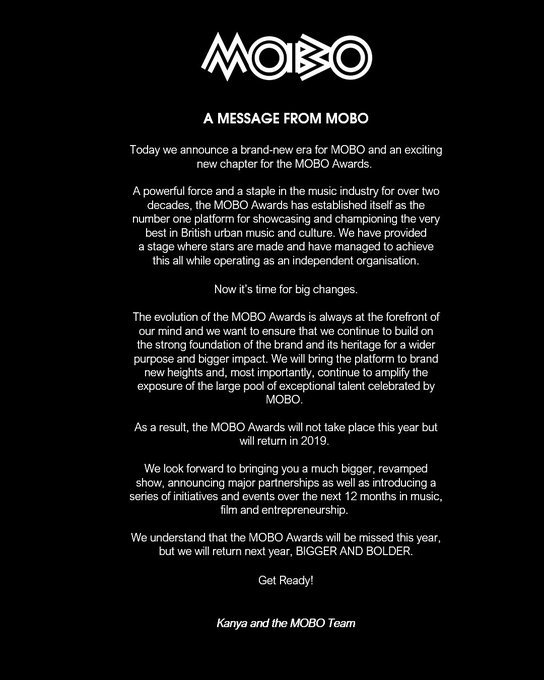 She said she planned to expand the scope of the Mobos beyond the annual awards ceremony to support emerging artists, not just in music but in film, television and other areas of the arts.

The Mobo Help Musicians Fund will be expanded, distributing £40,000 to unsigned, independent musicians; and the organisation will also launch a film production company.

Its first project will be a big-screen adaptation of Angie Thomas’ best-selling young adult book The Hate U Give.

Inspired by the Black Lives Matter movement, the novel tells the story of 16-year-old Starr Carter, who is drawn into activism when she becomes the only witness to the fatal shooting of her unarmed best friend, Khalil, by a police officer.

The Mobos have also pledged to continue their work for social causes – including their work with the B Positive Choir, which encourages ethnic minority communities to donate blood.

“We are thrilled by all these new developments,” said King.

“It has long been our ambition to expand Mobo into new areas of the arts and help more talent succeed so that exceptional talent will not go unnoticed. We want to thank everyone who has supported us so far and we look forward to continuing this journey with you.”

The first Mobo ceremony was held in 1996, when Goldie’s Timeless was named album of the year and Lionel Richie won an honorary award.

It sometimes attracted criticism for giving prizes to white artists, including Jamiroquai, Amy Winehouse, Sam Smith and Jessie J – even though the ceremony was founded to recognise and celebrate artists of any ethnicity or nationality performing “music of black origin” (hence the acronym).

Speaking to the Daily Mail in 2012, King said she had originally “had a hard time convincing people that an urban awards ceremony was even needed”.

“There was a huge gap in the market – urban genres weren’t recognised by the mainstream media, so there was certainly an element of not knowing quite how to market a black artist.”

However, she said the industry had grown and adapted since.

“We established our own unique style of music – UK garage, grime, British hip-hop, dance-hall, dubstep. We developed our own genres as opposed to just emulating our American counterparts.

“We started to do something original, and labels finally understood how to create a buzz around black and urban artists.”

In recent years, the Mobos have faced competition from the GRM Daily Rated Awards, which focuses solely on the vibrant, compelling grime scene; while the Brits has made a concerted effort to improve diversity in its voting academy. 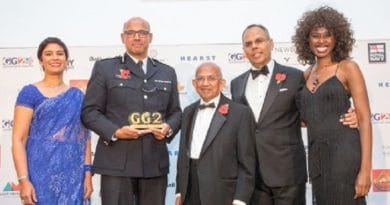 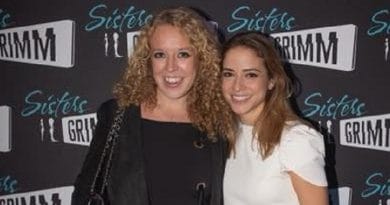 Sisters Grimm are putting diversity under the spotlight 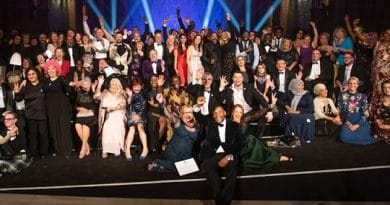