WaterAid placed 800 children’s schoolbags on the famous steps of St Paul’s Cathedral today as a stark reminder of the number of young children’s lives lost every single day due to dirty water and poor sanitation.

Each of the Cathedral’s 24 entrance steps represented one hour – and the 33 children younger than five who die every hour – a whole class that never even made it to school, all for the lack of something as basic as clean water.

On the bags in the front row were the names of real children whose lives were tragically cut short by diarrhoeal diseases linked to dirty water and poor sanitation, some as young as 9-month-old Arena from Madagascar,and some just about to start school, like from 5-year-old Jennifer from Zambia.

“The sea of bags lining the steps of St Paul’s is a stark reminder of the sheer numbers of young children who won’t live long enough to make it to their first day at school because they lack something as basic as clean water. It’s a dreadful thought for any parent;and this tragic waste of life is entirely preventable.

“Through my work with WaterAid, I have seen the incredible difference clean water and decent toilets makes, particularly for children. Clean water close to home helps keep children healthy and in school, giving them the education they deserve so they can reach their potential. By supporting ‘The Water Effect’ appeal, we can all help build a brighter future for children around the world.”

One in nine people around the world lack access to clean water close to home, while one in three have no decent sanitation. Together, clean water, decent toilets and good hygiene transform people’s health and create a powerful ripple effect, enabling children to go to school and their parents to earn a better living. That’s the water effect.

Haja,31, from Tombohuaun in the Sierra Leonean jungle, has lost two young children to diarrhoea caused by the dirty water the family drank from a natural spring. She said:

“I realised after the death of my children that the water is not good to drink. I look to the future and hope that such things won’t happen again.”

WaterAid has worked in Haja’s village to bring clean water, decent sanitation and good hygiene, and continues to work with the most marginalised communities in some of the poorest places in the world.

Marcus Missen, Director of Fundraising and Communications at WaterAid, said:

“Every single day, around 800 children under the age of five die because they are denied access to clean water and decent toilets. Many more will misss chool because they have to spend hours collecting water or are sick from drinking dirty water. But it doesn’t have to be this way. WaterAid is working towards a world where everyone everywhere has clean water and decent sanitation, and all of us can help make this a reality. Even small donations to our ‘Water Effect’ appeal could help make all the difference, helping to transform a child’s life.”

Children aged from five to 11 from Wyvil Primary School in London painted a sign to appear at the front of the steps at St Paul’s Cathedral.

Joana, aged 9, a pupil from the school who came to see the installation, said:

“I can’t understand why some children don’t have water. It’s not very fair –I want water for everyone!”

“The children at our school were shocked to learn just how many children their age have no clean water to drink; they’re eager to support WaterAid to help change the lives of others for the better.”

For more information or to donate, please visit www.wateraid.org/uk/children. 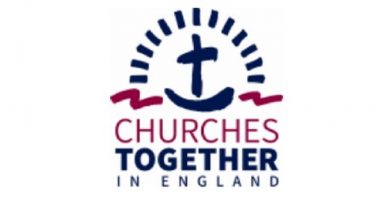 Churches Together in England – Job Vacancy for Principal Officer