The Duchess of Sussex wrote personal messages of love and empowerment on bananas for street sex workers to find in their food parcels.

Meghan and Harry had been visiting Bristol where they toured the Old Vic theatre and a boxing charity gym.

The duchess came up with the idea during an unannounced visit to the charity One25 on Friday.

Ms Markle said she had been inspired by an American woman who wrote empowering messages on schoolchildren’s bananas.

While she was in the charity’s kitchen helping prepare food parcels for the women, Meghan asked if they had a marker pen.

“I was thinking about this the other day,” she said.

“I saw this programme this woman had started in the States on a school lunch programme when on each of the bananas she wrote an affirmation or something to make the kids feel really empowered.

“I thought it was the most incredible idea – this small gesture.”

After being asked if Harry also wanted to write a message she said: “I’m in charge of banana messaging.”

The duke and duchess also privately met a former sex worker who was helped by One25 escape from a life on the streets.

The woman – called Sam – told the couple how she was groomed at the age of 14 into prostitution, and became addicted to drugs.

“It sounds really cheesy but it is that feeling that somebody actually cares,” she said.

Speaking of the duchess’s messages she added: “I can imagine being on the van, and ‘Meghan wrote this thing, and what?’ I think they might not eat it. I think that banana will be at home until it is rotten – because I would do the same.

“Little things like that when you are out – especially tonight if there’s women out there, we can see the weather – just to get that little thing… Meghan actually took her time out to write that on there. It’s lush.”

Earlier on Friday dozens braved snow and freezing temperature to see the Duke and Duchess of Sussex as they toured the Bristol Old Vic theatre, which is undergoing a £26m restoration.

Heavy snow had settled overnight which also saw most arrivals and departures cancelled at the city’s airport.

A planned walkabout was curtailed, with slush on the cobbled street outside the theatre making walking difficult.

The theatre was built in 1766 and has nurtured the talents of countless famous actors from Daniel Day-Lewis and Greta Scacchi to Peter O’Toole and Jeremy Irons.

The project is the second stage of a 10-year, £26m programme to completely overhaul and safeguard the future of the theatre. 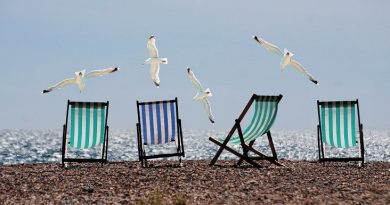