If I were to ask the wider population for a definition of sickle cell disease, it wouldn’t surprise me if I were met with confused looks or people struggling to give me an explanation. This is the norm in the society we live in, however this casual normality is the very reason why we need to bring awareness to the forefront of many discussions within the community – especially the BAME community.

What is sickle cell disease?

Sickle cell disease is the world’s largest genetic blood disorder, and occurs when the red blood cells (normally curve-shaped, like a sickle) stick and clump together, blocking the flow of blood through the blood vessels, and restricting nutrients, oxygen and vital supplies to organs in the body. This causes cell and organ damage, extreme pain to the individual and, in the worst cases, multiple organ failure and sometimes even death to the individual affected.

Who are most at risk at catching sickle cell, and why?

Sickle cell disease is a genetic condition, of which 98% of people affected are from Black African and Caribbean origin. It was traced back some 7,300 years ago to sub-Saharan Africa. This blood condition originally developed in the form of the sickle cell trait, as nature’s defence against malaria, which was ravaging the sub-Saharan areas of Africa and killing millions in the process. The emergence of the sickle cell trait gene enabled those who carried the gene a greater immunity against contracting the mosquito-borne infectious disease, whilst inevitably saving millions of lives.

Sounds like a miracle cure, right? So what went wrong?

Even though the individuals who carried the sickle cell trait gene had some form of immunity from contracting malaria, they still carried another potential deadly condition and, unbeknown to these individuals, two couples carrying the gene had a 25% chance of passing sickle cell disease to their children. This meant that individuals born with this new condition no longer carried the gene, but now suffered from the full-blown effects of sickle cell disease, without the immunity against contracting malaria either.

As you can imagine, during that era many people were born with a condition, of which they had no understanding, awareness or method of treating, and which often led to these children being labelled as cursed, and being shunned and chastised by friends, family members and the community in which they lived.

What has changed since then?

Sickle cell disease has been recognised as a global health risk by the World Health Organisation (WHO) for over 100 years, yet there seems to be little awareness of the condition; how it passed on, and the effects that many patients have living with the condition.

I guess it’s time to reveal that I have sickle cell disease myself – a condition I was born with but, due to the stigma attached to having the condition, my parents never told me I had it, and so never prepared me to deal with this potentially life-threatening condition. I actually found out I had the condition in my early 20s, when I was at university in Manchester suffering from intense stomach pain. I was rushed into hospital, and the doctor then revealed to me that I had a condition I knew next to nothing about. However, this is not a story about me; that will be for another article.

How many people in the UK have sickle cell?

This table (below) shows the chances of passing on the condition if you have, carry or don’t have sickle cell disease.

How can you check if you carry the sickle cell trait?

A simple haemoglobin electrophoresis test can determine whether you either carry the sickle cell trait or have the full-blown condition. The test can be done either by your GP or at your local hospital.

I have chosen to deliberately focus on the issue of blood donation, as the benefits are astounding. My daughter, who is only six years old, also has sickle cell disease, and her life was saved by having a blood donation. It’s vital that sickle cell patients in need of life-saving blood transfusions are able to receive blood. The issue we have at present is that only 1% of the Black community, and only 3% of the BAME community, are registered to give blood. This means the supply of blood does not meet the demand, which could mean that many patients with sickle cell disease could die if more blood donors from the BAME community don’t come forward.  You can register to give blood by visiting www.blood.co.uk.

The future of sickle cell disease is heavily reliant on how progressive we are as a community in regards to raising awareness. Sickle cell needs to be discussed within schools, churches and youth centres by community leaders. Only then will we see a decrease in the stigma of the ‘Sickle Cell Silence’, and only then will we see a different narrative that puts those affected by the condition at the forefront of the conversation for progressive and social change for the next sickle cell warriors, like my daughter, and beyond. 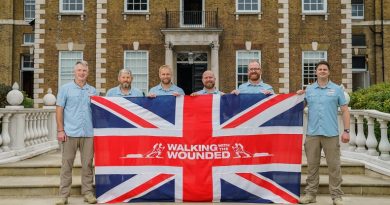