The writer of Ecclesiastes 4:9 says: “Two are better than one, because they have a good return for their labour: if either of them falls down, one can help the other up.” Equally, the Motown singing legends, Marvin Gaye and Kim Weston, scored an international pop hit in the 1960s with the song ‘It takes two, baby’. What both the Scripture passage and pop song refer to is the importance of solidarity and togetherness – the sense that we can achieve more if we work together.

This notion contradicts the fact that we live in a world that celebrates individualism, and values the singular over the collective. In business and finance, we highlight the endeavours of tycoons and entrepreneurs in ways which suggest their successes were solely a matter of their efforts and devoid of any shared input. Likewise, even in team sports, such as football or rugby, there is the ‘man of the match’ award for the individual whose efforts were pivotal in the squad’s success. Similarly, in Hollywood movies, in which there can be a cast of hundreds, only a few actors are singled out for their ‘Oscar’-like performances. Coupled with the above is the sense that the collective or group is temporary and subsidiary, while the individual or solo is the natural state of affairs. In music, no sooner does a pop group become successful than the media and musical pundits begin to speculate which band members will leave to pursue solo careers.

While Christianity is about one individual – Jesus Christ – the faith He founded is all about the collective and community. We refer to the ‘Church’ as the ‘Body of Christ’, which means it is more than a static building, but a collection of believers with one thing (Jesus) in common. In John 17:21-24, Jesus speaks about the believers being one, just as He and the Father are one, which emphasises Christian unity.

Despite this biblical mandate, there is a distinct lack of unity within the Body of Christ. It is invariably challenging to get churches from different Christian traditions and denominations to work together for a variety of theological, cultural and historical reasons. Yet, when they manage to set aside these differences and focus on what they have in common – the same calling to worship God and to share the Good News about Jesus Christ – much can be achieved. The Standing Together rally on 6 April 2019 on Trafalgar Square, London, which addressed serious youth violence, was one recent instance of what can be achieved when churches unite to tackle issues of common concern.

Moreover, Christian unity is a great witness to a sceptical world. It has been my experience that when it comes to addressing matters such as the academic underachievement of Black students; the disproportionate numbers of Black and minority ethnic people incarcerated in prisons or in the mental health system, and serious youth violence, those of other faiths and none, are not concerned with church-related theological/ecclesiological niceties (which they regard as navel gazing); they just want churches to get involved in the work to tackle these issues.

At the Prime Minister’s Serious Youth Violence Summit at 10 Downing Street on 1 April 2019, Theresa May stated that: “We are not going to arrest our way out of this situation,” and argued that faith groups must be part of a community-led approach to resolve this tragic situation. However, if the churches are divided, their contribution would be akin to a person working with one hand tied behind their back.

One organisation that has been working tirelessly to get churches to stand together is Churches Together in Britain and Ireland (CTBI), formerly the British Council of Churches. CTBI serves the churches of Britain and Ireland on the shared journey towards full visible unity in Christ, which sees a commitment by each church and denomination to deepen its fellowship with the others and, without losing what makes each interestingly different, to work with them towards a greater visible unity. CTBI played a pivotal role in the aforementioned ‘Standing Together’ rally, and is currently taking forward other joint church responses on peace and conflict, mission and unity, theology, creation, spirituality and reflection.

As previously stated, Church unity is not an easy task. As human beings, we are effectively hardwired to think selfishly, and ideas of loving our neighbour or working for the common good are not instinctive. However, as we consider Pentecost and the gift of the Holy Spirit, which not only signify the birth of the Church, but also the fruition of Christ’s prayer in John 17 (that we should be one), we must tap into the power that was made available on that amazing day, to pursue Christian unity. Anything less would be a betrayal of Christ’s prayer. 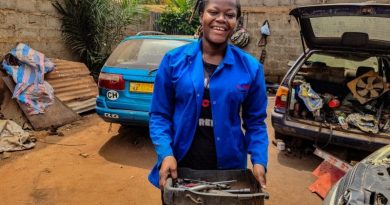 Re-Engineering Attitudes: How One Woman Is Beating The Odds To Tackle Prejudice In Togo

Is Britain a Christian Country by Richard Reddie