When Disney announced Friday that the star of its Little Mermaid reboot will be Grownish actress Halle Bailey — not Halle Berry, as I and the rest of my Gen X cohort misread — I was like, that’s pretty cool.

The impact of how this historic casting — the first time Disney selected a woman of color to play a white princess in its highly anticipated live-action reboots — didn’t even get a chance to register in my subconscious before I was hit by countless offending social-media posts from folks aghast that Disney changed the race of their beloved Ariel.

Within hours there was a “#notmyariel” hashtag. A Change.org petition demanded that Disney rethink Bailey. These folks weren’t racists, so they claimed. On the contrary, they were preserving culture. Their culture. That said Bailey is free to play Tiana, as they said. Or better yet! Create a brand-new story with a black princess. But please, pretty please, leave the beloved Ariel alone.ADVERTISEMENT

That wasn’t all. Some people took their ignorance to the next level, suggesting black people can’t be mermaids because black people can’t swim — or get their hair wet. Then there was the slew of memes featuring white actors assuming traditionally black roles. The craziest? Ben Affleck, Matt Damon, and the rest of the Good Will Hunting crew starring in Boyz N the Hood.

Boyz N the Hood is about the specific experience of black men growing up in Compton. This is a real-life story. Mermaids are not.

Why are certain folks so upset about reimagining Ariel as black?

The Little Mermaid was the first installment in Disney’s renaissance, released in 1989 and is a cultural keystone for millennials. And I get it, it’s hard to see people mucking with your memories.ADVERTISEMENT

It can’t be about authenticity. Disney took serious liberties with Hans Christian Andersen’s original version of “The Little Mermaid,” who, lest we have forgotten, he didn’t even name. The story, originally published in 1836, is replete with religious references to souls and afterlife. The sixth sister, as she’s known in the story, had a much harder row to hoe for trading in her fish tail for human legs. And in the end, she doesn’t get the prince — like, at all.

“It goes back to this idea that people want to cast the fantastic in their own images,” explained Madeline Miller, the Bryn Mawr-based author of the best-selling Circe, who is an expert in fairy tales and myths. It’s natural for people, all people, to want to see themselves in bigger-than-life stories, whether they are the center of a fairy tale, cultural icons like Santa Claus or the Tooth Fairy, or in the spiritual, like Jesus Christ. It allows people, Miller said, to claim a certain cultural legitimacy because they can see themselves in a universal truth: “This story is about me. I have a long history. This culture belongs to me.”

(This is why pop-cultural history has allowed white actors to play real people of color, despite the blatant inaccuracy, such as when Cleopatra somehow resembled Elizabeth Taylor. Although, I would argue this is changing as more people have a platform in the age of the internet, such as when Scarlett Johansson played a Japanese character in the flop Ghost in the Shell.)

Yet this is not the point of fairy tales or myths, Miller said.

“One of the gifts of fairy tales is they get to shift in our retelling of them,” Miller said. “They can pretty much be whatever we want them to be because they are fantastical, yet their themes are universal.”

When the majority culture controls storytelling, black people are essentially left out of the universal experience. And when we do get to star in well-known versions of mainstream tales like the 1997 Cinderella starring Brandy and Whitney Houston, or The Wiz, they are viewed as niche entertainment, largely seen by black people in black households in black spaces. To everyone else, they are other.

Disney’s live-action Little Mermaid is not going to be the black version. It will be the version. Like it or lump it. And that, said Ebony Elizabeth Thomas, an associate professor at the University of Pennsylvania and author of The Dark Fantastic: Race and the Imagination From Harry Potter to The Hunger Games (NYU Press), is key.

“It is these mainstream productions that are seen by majority audiences,” Thomas said. “Our stories go beyond the ghetto story. We are more than the black best friend. And when we get to star in these majority stories, that teaches people how to treat us.”

In other words, if the majority can see people who don’t look like them in exalted positions — like, say, a princess — starting at a young age, perhaps they can get their mind around the idea that “others” are real people who deserve their respect.

Thomas also said that it is important that children of all races see people of all races in science fiction and fantasy because of the way those genres shape young people’s imagination.ADVERTISEMENT

“Whether it’s seeing people of color traveling faster than the speed of light, or as superheroes, dragons, or even mermaids, when we see ourselves in these roles, even as kids we believe we can do anything,” Thomas said. “These images shape our minds on a subconscious level.”

This I know is true.

When I was a little girl, princesses were white. The only black cartoon characters in my life were Fat Albert and the Cosby Kids, and there was nothing fantastical about them. Bill Cosby gave us life stories through the eyes of brown kids with unnaturally exaggerated lips who played music in a junkyard. There was no happy ending in that.

At the time, I was fine with that because I didn’t know any better. But, I’m sure I deeply internalized the belief that black girls just don’t get to live that princess life, and that happily ever after was for white girls only. Who knows what the impact was?

I’m glad Disney is taking steps to make sure the next generation of little girls — black, white, Latina, or Asian — will always get their fairy tales. Because happy endings are for everyone. 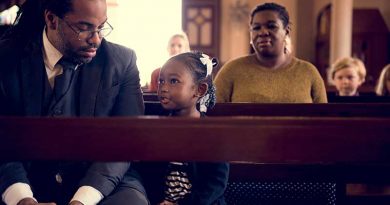 Raising Children in the Faith by Mikkie Mills