In its pilot effort, the Multitrack Audio Fellowship provides paid placement opportunities for aspiring journalists from black, Asian and minority ethnic (BAME) backgrounds, and from economically disadvataged groups. Disabeld journalists are welcome to apply too.

There are six radio and podcast companies involved, offering three successful applicants a month-long placement at two of the companies. The deadline for applications is 8 July 2019.

Not only will they gain experience and industry contacts, they will be paid a London Living Wage of £10.55 per hour. The scheme is only available in London this year, though there are plans to branch out of the capital.

This can be a decisive opportunity for out-of-town work experience students or interns who need to commute in or find accommodation nearby, as they could not otherwise afford to work in London.

Independent audio producers association, Audio UK, funded the initial launch event in May 2019, but the wages of applicants are paid by each of the six organisations (which are all Audio UK members): 7 digital, Loftus, Muddy Knees Media, Reduced Listening, Somethin’ Else and Whistledown.

“There has been previous trends in the audio industry, that placements and internships have become an unspoken first step in – and sometimes you’re actually doing a full-time job,” said Leanne Alie, podcast project manager and diversity consultant, who is also on the steering committee of the scheme.

“It can take a knock on your confidence when you work for a big company and that paid position isn’t coming and you have to keep doing free work.”

The fellowship also welcomes applications from disabled individuals, as there are only five per cent of disabled journalists while 18 per cent of UK population define themselves as disabled.

But there are more barriers to breaking into audio than immediate funds.

“It’s not just about money, it’s about who you know,” Alie said.

“People in audio, especially in radio, have been able to break in or work their way up through contacts and people they know. If you’re not in that circle, you do not have that access. We have to widen it up for different voices and perspectives.

“It’s important that we represent the people who live in our country and our cities, so that we don’t just hear the same things from the same types of people.”

What this means for the BAME journalist on placement is a difficulty fitting in and creating compelling content that speaks to their own interests.

“Speaking as a black woman myself, sometimes it’s almost as if you don’t see the spaces for you. You don’t feel you can survive there because there’s no-one there like you,” she said.

“It can be difficult to work in an environment where you are making content that doesn’t resonate with you or the audience you connect with.”

The rise of media geared towards people of colour or BAME audiences, such as Galdem or podcasts The Read, show that large organisations are missing out on the talent that exists on their doorstep, added Alie.

This issue is not being ignored by larger organisations, such as the BBC, who makes an effort to include more diverse voices with a podcast made by and for black British women, The Sista Collective.

Journalism.co.uk understands that the fellowship is searching for more organisations from outside of London to be involved as they look to break out of the capital in the future, targetting cities such as Bristol, Manchester and Glasgow.

Accepting that not all broadcasters would have the ability to fund these applicants, they are also inviting training and other supportive organisations to be involved in the future.

Alie encouraged anybody who fits the criteria to hit apply.

“All we want to see in the application is passion for audio and why you will benefit from the scheme,” Alie concluded. 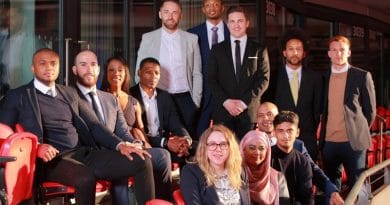 On The Board graduates celebrate at Wembley

Keep The Faith About town