The Evangelical Alliance is pleased to announce that Gavin Calver will be our new CEO. He will succeed general director Steve Clifford, who announced in April that he will step down later this year.

Dr Tani Omideyi, chair of the Evangelical Alliance’s board of trustees, said:

“Gavin excelled throughout the interviewing process. With a strong field of applicants, he impressed the board with his extensive expertise and his vision for the future, and he left us with a sense of excitement and great expectation. We came out of the process feeling confident that we have found someone chosen of God for this new season. His appointment is fully endorsed by the whole board.”

Gavin has been the Evangelical Alliance’s director of mission since 2015, and he previously spent 14 years at Youth for Christ, six of which in the role of national director. During his time as director of mission Gavin launched the Great Commission hub, which inspires and equips Christians to share their faith with boldness and confidence. He is chair of the Spring Harvest Planning Group, and regularly preaches and teaches in churches around the UK and beyond.

“I am privileged to be taking on this leadership role at the Evangelical Alliance. The Evangelical Alliance has been at the heart of evangelicalism in the UK since 1846. This unity movement, which has a rich and prestigious heritage of gospel unity in the church, has had a profound impact on the social fabric of the UK, and I am deeply humbled to accept the role of CEO.

“Every week I have the opportunity to visit and share with local churches that are living out the hopeful reality of the gospel, and I am continually amazed at what the church is doing. I am looking forward to the Evangelical Alliance developing even deeper relationships with local churches as we seek to understand and celebrate what God is doing in our communities.

“I am grateful to Steve, who has been a big influence in my life. His tenure leading the Evangelical Alliance has been exemplary. The legacy he leaves, especially around the work of uniting ethnically diverse evangelicals, will last for years to come. I have loved working with the great team we have at the Evangelical Alliance and I am looking forward to working with such a gifted team in the weeks, months and years to come.”

“Gavin has been a dedicated and prolific evangelist, faithfully preaching the gospel in churches across all four nations of the UK week in and week out. He leads with integrity and an unwavering commitment to unity. I am thrilled that he will be leading the Evangelical Alliance, supporting the church as we make Jesus known throughout the UK.”

Gavin is married to Anne and has two children. He is an ordained evangelist, a regular public speaker, and has authored five books. He loves new challenges, is an avid AFC Wimbledon supporter, and was part of the team that broke the world record for the longest five-a-side football match. 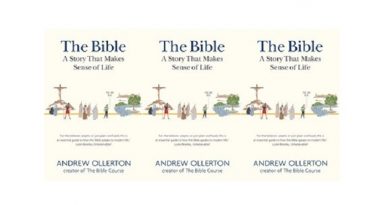 The Bible: A Story that Makes Sense of Life